A desperate US government, fearful of losing its supply of affordable energy, has allowed the NSA to form a special unit, Team talon, to confront terrorism all over the globe, including on US soil itself

The current situation is quite grim, oil supplies are rapidly running out, demand is increasing, and prices are out of control. Powerful oil companies, and world governments, along with terrorists, are fighting to control the precious energy reserves, before its all gone. A desperate US government, fearful of losing its supply of affordable energy, has allowed the NSA to form a special unit, Team talon, to confront terrorism all over the globe, including on US soil itself. Sound like modern headlines? It is, in fact, the premise of a new realt time strategy game, Act of War.

Act of war is a real time strategy game set in the current era. Players can select to play as two of the three factions, either the US Army or the elite anti-terror Team Talon. The third terrorist faction, the global consortium, is AI only in the campaign game. Using these forces, players will battle their way through the campaign game to victory.

The game features an extensive story line, played out in campaign missions, with live action cut scenes before and after each mission. there is also a multipalyer mode, in which the terrorists are a playable faction. The cut scenes feature key elements of the story line, and a real effort was made to give the game a realistic feel. Real life experts of current affairs were used to help the story line, which is quite realistic, and helps keep the game moving forward, as you battle through each area of the campaign.

Players must take command of the US forces, either the regular army, or the NSA directed Team Talon, and seek out and destroy the global consortium forces, defend key targets, capture wanted terrorists, and a number of other operations, all played in real time on a full 3 dimensional map board. Each mission involves different tactical situations in which players must accomplish set objectives for the overall missions.

Even though the game is heavily dependant on the story line, you can play any scenario you like, in any order. So if you fail a mission objective, you can simply skip that scenario and move on, or replay it if you like. This is somewhat of a draw back to me, I prefer a game where you have to accomplish the missions to win, but that is just a personal preference. If you fail a mission, you won't see its movies, which can detract from the story line, but it isn't critical.

Act of war does have some traditional building up, as seen in many RTS games. You need bases for fuel and units, but this isn't a game of 'tank' or 'cavalry' rush, a huge army won't always win. The idea here is to use the army you have effectively on the map, moving it along with smart commands, not simply having all your units fire at one target and move on to the next target.

The only resource in this game is money, US dollars. The way to get money is to build oil fields, capture enemy forces, or, to take it from banks. As such, you won't waste a lot of time trying to balance this resource or that one, you just need the cash to flow, and all will be fine. Building takes longer to see a return on investments, but its a safer method then hit or miss captures. Taking banks will give you a continuous flow of ready cash, so it does have value.

Most of the game boards are centered in urban environments. The game designers went to great lengths to have many historical sites included, and the level of detail is excellent. Players will battle in places as war away as the Libyan desert, and Washington DC. All structures in the game can be entered, and your units will attempt to clear and secure any building you enter. As you are often in an urban environment, setting units on higher floors has value, and snipers come into their own on upper floors.

The game's interface is quite smooth, and includes commands for units to move, crouch, fire, advance, and so on. There is no tutorial, players must read the game manual to understand how to play, but this isn't an overly complex game, in fact, if you understand most Real Time Strategy games, you will be playing act of War within minutes, only referring to the booklet for specifics of keys and commands.

The sound quality and voice overs are quite nice, and the game has a decent musical score. Some of the TV movie like cut scenes can be tedious, but they do add to the game, and make it different from the usual RTS fair. Visually, the game is extremely impressive, the units move well, and the terrain is excellent, as are the pyrotechnics. You will certainly get your money's worth out of this based on the visuals.

Overall, this is a fine effort for the Real Time Strategy genre. A compelling modern era story line, excellent attention to detail, and good quality graphics make it a fun game to play. By all means, pick this game up, you will be fighting for oil for a long time if you do, but in a fun way!

Battling on the streets of Washington, DC is truly a memorable and exhilirating mission. 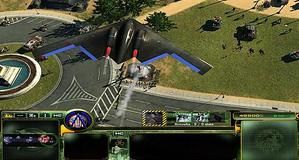 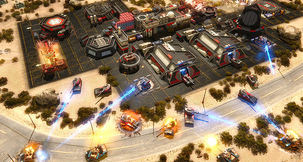