A Solid Multilayered Marriage of City Sim and Real-Time Strategy

The Anno series has been around for quite a while. Ubisoft’s city builder has taken us through numerous points both behind us in history and far beyond into the future. Anno 2205 is the newest entry, coming out of Ubisoft’s Blue Byte Mainz studio who also handled the previous Anno 2070. Taking on the success of its previous entry, Anno 2205 transports players even further into the distant future where they’ll take on a company chosen to be involved in an ambitious project to colonize the moon. Anno 2205 brings a lot of good and interesting things to the table, but the journey to create a lunar utopia unfortunately experiences some technical hiccups along the way.

You start by creating your company and choosing your initial starting point of operation for the building of a space dock which will allow transportation for your lunar project. There are three different regions to choose from and each present a different setup in available acreage, coastal building sites, and mountain building sites. They also each offer a different special project that allows benefits in the form of energy, rare minerals, or ornamentals. The initial choice will be of little significance, but down the line when cities blossom and players really need to consider what they have in their region, each area can present a different challenge and boon. Even so, there’s no need to stress too much over your initial choice because of Session Mode. 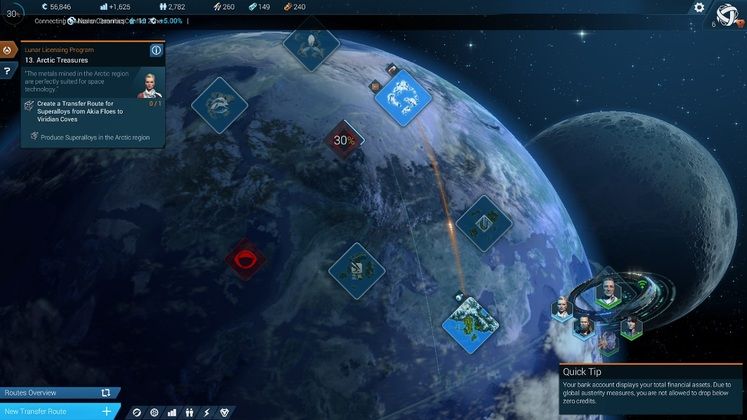 Session Mode is a new addition for Anno 2205. In order for players to build resources for their lunar project, they’ll need resources from drastically different outlets. Once you’ve reached a certain point, you’re offered the ability to begin building in your choice of one of three artic zones. You can use this opportunity to fill the gaps in your initial zone choice and vary your experience and opportunities. The same thing occurs once you’ve finally reached the moon and begin establishing your colony there. Each zone is a loadable area accessible from your world map. Once you select a session, that zone is loaded and becomes your active zone for construction. It’s an interesting way to layer the unique ecosystems you’ll be working with in Anno 2205.

Speaking of unique ecosystems, each of the three zones you work in presents a unique challenge for construction planning. Your initial starting zone is a temperate climate that serves as sort of a tutorial for how to initially build up your cities, but as you move onto the arctic and lunar zones, conditions become quite different. For instance, the artic zone requires you to factor in heat. Each factory produces heat and it’s your job to position residential settlements within range of that heat so your workers won’t freeze. On the flipside, the moon requires that you build shielding against asteroids and carefully plan and position your building around this shielding in order to remain protected. Essentially, players will be building and operating three different city sims at once in Anno 2205 and by the way everything is positioned, it comes off as uniquely challenging rather than overwhelming. 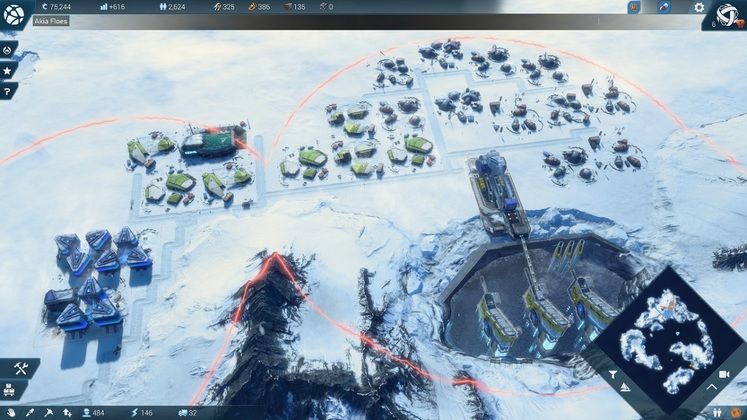 The temperate, arctic, and lunar zones all present a unique challenge for construction planning

You won’t work without opposition and a little diplomatic cooperation in Anno 2205. The game brings back other factions, this time in the form of other corporations that are also working towards their own lunar project. At different points, you may end up helping any one of these factions by helping them in special projects or voting for them in world council, which will lead to them offering players various resources or tasks for rewards. Another point at which this comes into play is in Conflict Zones. Throughout the game, you’ll come in contact with some nasty people that don’t necessarily want there to be more colonies on the moon. This leads into Conflict Zone missions in which you must lead a naval force to destroy threats and complete specific missions to progress your cause.

Conflict Zones play out as a sort of RTS combat affair. You control only three naval ships at the beginning, but the growth of your cities, technology, and combat experience allows for new ships and upgrades to your existing ones down the line. During Conflict Zone sessions, you’ll navigate naval forces through enemy opposition, usually to find and eliminate a priority target or structure. Along the way, you’ll find collectibles either scattered through the waters or obtained from destroyed vehicles and structures. There are fuel tokens to power defensive abilities like repair drones for your fleet and tokens for calling in special offensive weapons like the E.M. Pulse. There are also various corporate contacts scattered throughout conflict zones that offer you side missions in addition to your primary goal for bonus resources and/or combat experience. Anno 2205’s combat aspect is an interesting diversion to the building portion of the game and especially crucial if you’re in desperate need of certain resources for your projects. 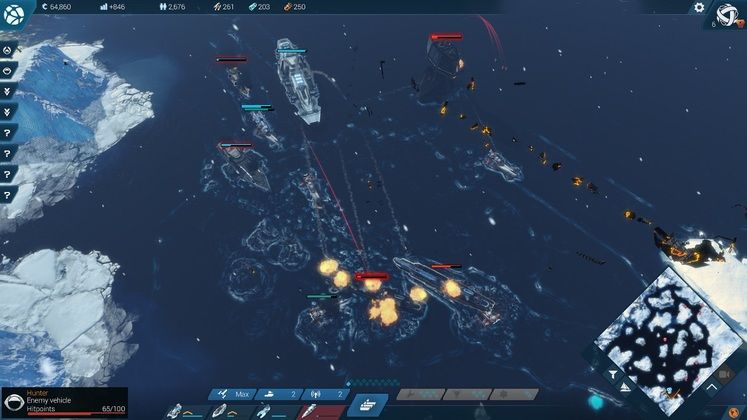 I would love to say Anno 2205 is perfect, but I experienced some glaring technical hiccups in the game. I run a pretty high-end machine, but even on low graphical settings, I experienced lag and frame drop at certain points. I especially noticed FPS taking a hit when I panned the camera over densely packed areas such as forests or loading from one session to another quickly. On one particular occasion, quickly moving from my temperate zone to the arctic one froze the game and crashed it. This only occurred once and thankfully the game autosaves, so I didn’t lose anything, but it’s still a glaring issue in an otherwise fantastic sim/real-time strategy hybrid.

Anno 2205 has so much going on and makes all of your tasking varied and interesting. One game is three different building sims with real-time strategy naval battles peppered in and everything moves in a way that makes it compelling and addictive instead of overwhelming. It’s an ambitious improvement in a lot of ways over Anno 2070. Unfortunately, the technical issues keep it from being the perfect entry in the series that it wants to be.

The initial movement into new zones was super cool. I enjoyed the experience of receiving a clean slate to work with and learning the new rules in which to create and maintain my cities. 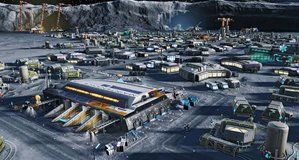