Before I get into this review properly, I have to say that whoever thought putting a stationary turret section in ArmA 2: Operation Arrowhead was a good idea deserves to be tied naked to a serengeti tree branch before having their dangly parts painted green and introduced to a hungry giraffe.

Such an obscure and elaborate torture might seem unnecessary, but turret sections are irritating enough in the least realistic of shooting games. Not only are they enormously dull, they show a distinct lack of imagination on the part of the developer. But in a Military Simulator, where jet fighters and anti-air turrets actually work as they do in the real world, it's an experience liable to have you pulling your own fingernails out with your teeth in frustration.


This is very much the case in Operation Arrowhead. The turret turns too slowly and simply isn't accurate enough to shoot the multiple approaching jets in the time that is available to you. To make things worse, this turret section comes straight after a brilliant little scenario in which, as the leader of a special forces team, you have to rescue several hostages from an abandoned mine.

In fact, this sort of inconsistency is something of a theme in Operation Arrowhead's campaign. After a somewhat baffling introduction which stuttered like an inebriated Gareth Gates on my PC, I found myself taking part in an airborne invasion of an airfield in the fictional country of Takistan (no prizes for guessing which conflict-ravaged country BI's new landscape is based on). The mission itself was intense and exhibited what ArmA 2 did best – realistic infantry combat and heart-and-minds warfare against the backdrop of a much bigger ongoing conflict. Weirdly, the playable mission also ran much smoother than the unplayable intro, although the frame-rate still has a tendency to drop drastically in built-up areas.

From playing as a low-ranking squaddie whose two main concerns were to do as ordered and not get killed, the second mission went to the complete opposite end of the scale, placing me in the boots of a commander of a large armoured convoy. Even though I've played all of Bohemia Interactive's games, such a massive swing in gameplay caught me off guard, and seems completely at-odds with BI's claims that Operation Arrowhead is designed to be more accessible to newcomers.

Having said that, the mission was quite enjoyable once I had remembered how to issue the right commands, move the tank and manually operate the main gun, and it showed off the sheer scope and ambition of the ArmA games. The deserts and scrubland of Takistan make for a refreshing change of scenery from the evergreen forests of Chernarus, and the tactical difference is signifcant, with less vegetation meaning both sides can see and fire further.

Additionally, as with ArmA 2, the campaign branches out with various choices that need to be made along the way. Yet because the story of Arrowhead is far shorter and more fragmented than that of Red Harvest, the choices are much less complex and interesting than those of ArmA 2, often boiling down to helping Takistani civilians on short side missions or being a downright git and not helping them just because you've got the gun.


So the campaign is short and, while relatively enjoyable, is hardly the greatest thing Bohemia Interactive have created, but it's not all this expansion has to offer. There are also seven single missions. These are fifteen minute scenarios designed mainly to showcase some of the new gadgetry the game has to offer such as the Little Bird chopper (think Black Hawk Down) and the Unmanned Aerial Vehicle, which can be used to recon areas of interest before risking the lives of your squad. Furthermore, all the new weapons and vehicles can be toyed about with in the mission editor, which remains in my opinion one of the best editors around.

Then, of course, there is the Multiplayer side of things, which aside from anything else, substantially increases the replay value of the package. As with ArmA 2, the entire campaign can be played through cooperatively, as can the single missions. However, things are slightly different this time around. Whereas in ArmA 2 the campaign concentrated primarily on a four-man Recon team, Operation Arrowhead mixes things up a little bit. Sometimes you might play as a closely-knit squad, but other times players will command various parts of the operation. For example, one player might assume the role of a lone sniper, and another might take command of an attack helicopter, providing cover for the man below.

If retreading the campaign and single missions with some friends isn't doing it for you, then there are a variety of competitive modes, including an insane airborne deathmatch map named Dogfighter, and the hugely ambitious Capture the Island mode. With matches including up to fifty players, Capture the Island does pretty much what it says on the tin. Two armies plus an Independent militia clash heads in an island-wide (although technically Takistan isn't an island) conflict as they attempt to grab as many towns and villages on the map as possible. But you don't necessarily have to be a combatant to help your side. Bases need constructing and supplies need transporting to earn armies enough money to access better equipment. Provided you can find a well populated server, this mode is very enjoyable.

Even if neither of these multiplayer modes appeal to you, the inclusion of the mission editor means there are boundless opportunities for user-created multiplayer missions, so it's highly likely that there's something in the immense online wilderness that will tickle your virtual taste-buds.


It's difficult to sum up Operation Arrowhead. On the one hand it brings more of what we love about Bohemia's games, gritty combat on an immense scale, with an entirely new setting, a decent campaign, some short but sweet single missions and a substantial addition to an already popular multiplayer. Yet the expansion doesn't fix any of the problems ArmA 2 had. The engine remains very glitchy and prone to bugs and the AI still flits between being borderline psychic and borderline brain-dead.

If you're a fan of Bohemia's games then there is little doubt you will enjoy Operation Arrowhead, and perhaps that's the best way to conclude. Although it's a standalone game, on its own Operation Arrowhead is unlikely to sway you if you're not already a Military Simulator convert – certainly not with a retail price of almost twenty five quid. Combined with ArmA 2 itself, however (and you can purchase a Combined Operations pack which includes both games) the overall game becomes much more than the sum of its parts. It might not be better than ArmA 2 and it doesn't really fix what was broken in its bigger brother, but the two games combined does provide an improved experience, and at the end of the day, that's what expansion packs are all about.

If you’re a fan of Bohemia’s games then there is little doubt you will enjoy Operation Arrowhead, and perhaps that’s the best way to conclude. Although it’s a standalone game, on its own Operation Arrowhead is unlikely to sway you if you’re not already a Military Simulator convert – certainly not with a retail price of almost twenty five quid. Combined with ArmA 2 itself, however (and you can purchase a Combined Operations pack which includes both games) the overall game becomes much more than the sum of its parts. It might not be better than ArmA 2 and it doesn’t really fix what was broken in its bigger brother, but the two games combined does provide an improved experience, and at the end of the day, that’s what expansion packs are all about.

Calling in an artillery barrage on a nearby militia camp and then running like stink while the world explodes behind you. 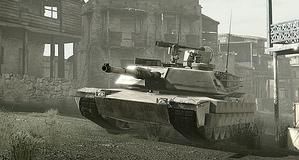