Arslan: The Warriors of Legend

Arslan: The Warriors of Legend Review

Not a game of legend

Let me preface this review by saying I had no idea what Arslan was before I reviewed this, so I won’t be able to tie in the anime or manga with this game. And I don’t know if this game is meant to be fan service, so I’ll be looking at this purely as a game. Does this game have a good story, mechanics, characters, etc?

Arslan: The Warriors of Legend

Not a game of legend.

Based on research, I do know Arslan started as a novel in 1986. It followed the tale of Crown Prince Arslan of Pars. A neighboring country invades Pars, takes it over and captures its king. From there Arslan joins forces with a number of allies to retake Pars. But the driving sub-plot is Arslan fighting against a maniacal Lord called Silver Mask who claims he’s the rightful heir to the throne.

Arslan: The Warriors of Legend has the same plot. So if you’re wondering if this game brings an original story within the Arslan universe, it doesn’t seem to. I don’t know if there are minute differences in the portrayal between the novel, manga, or anime, but just know that this is the premise of the game. 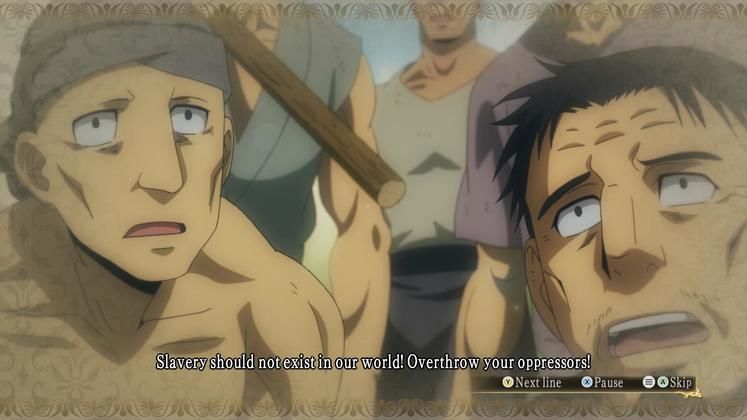 Exactly how I feel about the performance, too

What’s evident about the story and the way it’s told is it’s slow-paced. It’s a 12-hour game but it could have been condensed to eight. The story is told through mini- episodes which is set up similarly to an actual episodic cartoon series. You can tell when parts of the story aren’t necessary but they were made to pad the length of the season; or in this case, the length of the game. Cutscenes can last 10 minutes but they do a fine job of displaying character traits and establishing the cliché Japanese personalities you see in most mainstream anime’s. You have the noble and loyal character, the beautiful but firm character, the ladies-man, the youthful kid with tons of resolve, and the straight up quirky character. It’s all there. Even the awkward Japanese cultural moments. Like when a young teenage girl is crushing on an adult and doesn’t understand why he doesn’t like her, while an adult woman is giving her advice on how to win him over. Yeah.

You can skip the cutscenes if you wish but I actually found them refreshing, even though the story wasn’t very interesting. It was a nice break from the monotonous Dynasty Warriors-style combat and helped me keep going.

The combat isn’t bad but once you’ve played it for four hours, you’ve played the other 10-12 hours. Hundreds of enemies fill a level and you run through taking them out. You don’t have to kill all of them but if you want to level up, that’s the best way to go. Over time you level up and earn more finishers and that keeps things a tad interesting, but the string of combos you can execute are the same for every character, so you find that one combo that works really well and you keep on doing it and that’s when the game becomes rote.

In some ways, it’s good because a lot of story dialogue occurs while you’re playing and since the entire game is voiced in Japanese, you have to read them (unless you speak Japanese, of course). It’s hard to do that while you’re fighting hundreds of enemies, but when you don’t have to think about it, you can look down and read what they’re saying. It would be nice if you could change the language.

Watching the numbers increase on your combo or kill count isn’t exciting either because 1.) it’s too easy and 2.) completing missions can get in the way of whatever joy you’re having from knocking enemies out in crazy anime fashion. Missions pretty much run the same way. You kill a whole bunch of people until you hit a dead end. You’ll either have to kill certain enemies to move forward or gather your troops for a Mardan Rush, which is when you gather your entire army for a huge blitz towards a barrier. Once you knock down the barrier, you move on to the next phase repeating the same thing in one way or another. 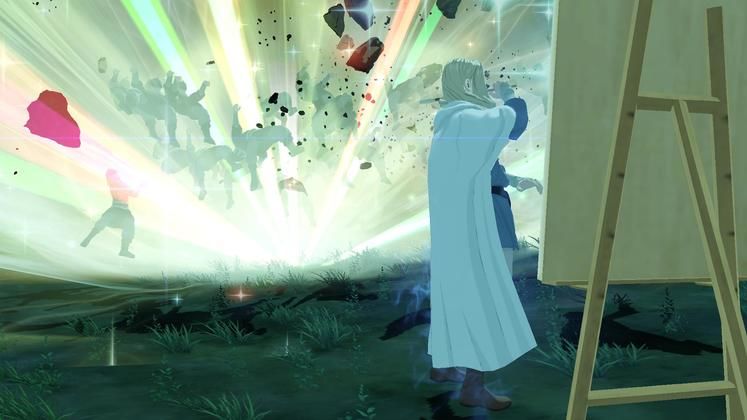 The most annoying missions were the ones where you had to follow A.I. to a certain location or stop an enemy before they reached a location. The A.I. frequently would run back and forth, run in circles, or sometimes stop-run-stop-run. I failed a mission a few times because my allies weren’t moving with me so they died before I realized they weren’t with me. And in the case of keeping someone from escaping, usually there’s green brackets around their name but sometimes after you knock them down, it disappears. So when fighting hundreds of troops, I’d lose him, then I’d look at the small and cluttered mini-map and he was three-fourths of the way to his exit.

When you’re not forced to focus on the mission objectives, watching bodies fly after executing specials and watching characters move like they do in anime is fun. When I first started playing, I spent about 10 minutes just running guys over with horses. It was hilarious. Unfortunately, any excitement the combat has suffers because of poor optimization.

It seems the game can run at 60 FPS but it’s poorly optimized and I had trouble running it at 30 FPS consistently. I have a computer that meets the recommended settings (i5-3750K, 8GB RAM, GTX 660Ti) but at no point could I get a consistent framerate. At the highest settings, it ran around 20 FPS or lower. Middle settings are anywhere between 23-32 FPS and the low settings can hit 32-54 FPS. It was never 60 FPS except in cutscenes and even that fluctuated. I tried mixing and matching different graphic options but had to settle on the default low settings.

V-Sync has three options labeled 0, 1, and 2. V-Sync 2 combined with the default low settings gave me the most consistent framerate but I still encountered battles that dipped to 11 FPS. One battle stayed between 11-15 FPS the entire time. Cutscenes can also dip into the lower 10’s or 20’s.

Despite the framerate issues, the game looks great. The cel-shade drawings are crisp and lighting and shadows mimic any high quality anime. Cutscenes also look great though sometimes they act more like pictures than FMV’s, but there’s hardly any context lost. It’s just a shame that I had to reduce the graphics in order to have a decent playing experience. So if you can max the graphics without suffering framerate problems, you will be very pleased.

The overall construction of the game is a mess. Button prompts don’t respond at times, especially when trying to climb ladders or mount your horse. You can press a button to call your horse but if you’re still moving, your horse will stop at your last location and won’t actually come to you. Hitboxes are shoddy in places, as well. In-game cutscenes can catch you off guard and interrupt your special move causing you to waste your meter. Some bosses have shields and when you break them, they’re dazed and open for attack, although sometimes they just get their shield back and there’s no logical reason for it. Little things like that start river dancing on your nerves. 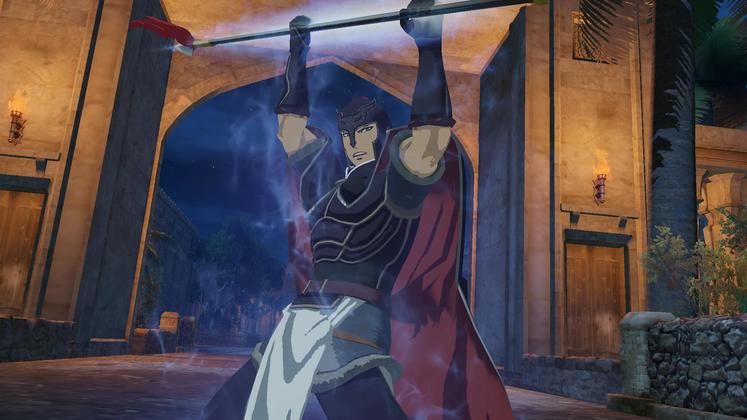 Special moves are easily the highlight of combat

It’s probably good to mention the game has a Free Play mode that lets you play missions with any character and without waiting for cutscenes. Each mission gives a rank on how quickly you finished it – that’s also in the story mode – but you can only compare it with yourself. There’s no leaderboard of any kind. You can also play the story or Free Mode online but the servers weren’t up or they were empty because the game wasn’t out when I played it. But I’d be cautious if you’re excited about playing online. The game’s performance is shoddy, so if the servers turn out to be having a latency party… I can only imagine your reaction.

I don’t think it’s a spoiler to say the game ends on a cliffhanger, but after playing this, I just don’t see any reason to consider playing the next one. If you’re a fan of Arslan and you really, really enjoy Dynasty Warriors, you might find some fun in this. If you just like Dynasty Warriors, the performance issues are a huge turnoff and the story isn’t worth playing through to unlock all the characters. Otherwise, if you’re interested in Arslan, read the novel, mangas, or watch the anime. This game is 12 hours too long to play for the cutscenes.

ARSLAN: THE WARRIORS OF LEGEND VERDICT

There’s no making up for a lackluster story that clearly pads the game length, unimaginative missions, or a weak combo structure, but Arslan: The Warriors of Legend could have been a much better experience had it not been marred with inexcusable framerate problems and sullied with glitches.

Watching a bunch of enemies get sucked in by Daryun’s attack and them bursting like a fireworks display on the final blow.

Arslan: The Warriors of Legend Essentials 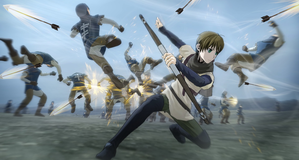