Neither Assassin nor Creed 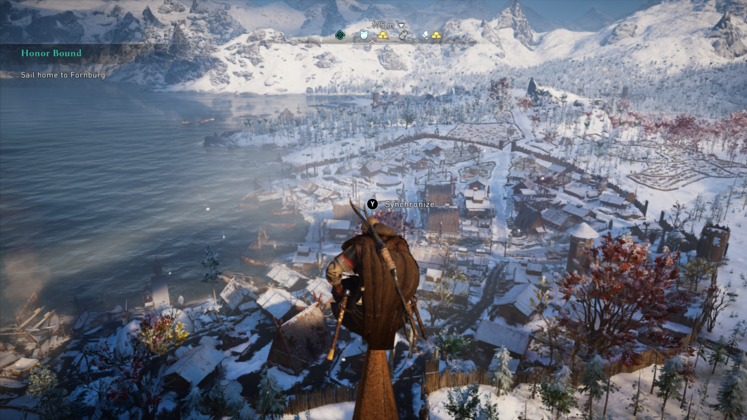 Assassin’s Creed: Valhalla takes place in 873 AD, as King Harald Fairhair – a person that historians currently debate if did or did not exist – starts the process of uniting the various Viking tribes into what will eventually become Norway. You play as Eivor – a male or female Viking warrior whose tribe was slaughtered by a rival warlord years past and now serve Styrbjorn, Raven Clan’s tribal king who took you in as a child. 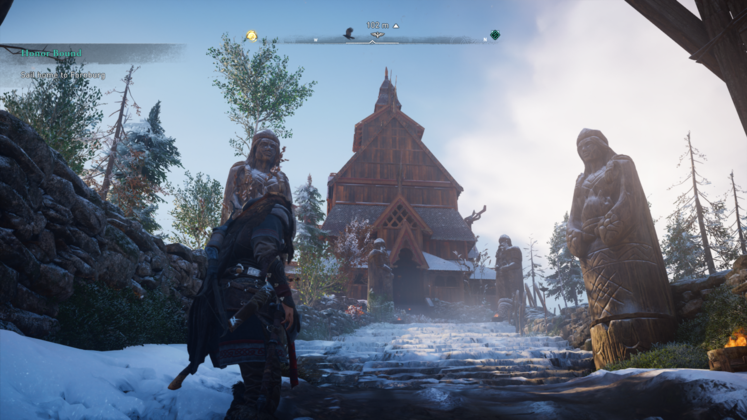 Eivor is angry and seeks revenge, which they eventually find by murdering the warlord that killed their parents, but is held in check by Styrbjorn, whose son Sigurd also desires combat and honour above anything else. When Styrbjorn pledges allegiance to King Harald, Sigurd throws a tantrum over losing his position as a prince and takes off with half the village (and Eivor) to raid England.

Hence Assassin’s Creed: Valhalla begins, with a 4 to 10 hour prologue set in Norway. Once the Raven Clan sets camp in Central England to the south of Leicestershire, you immediately jump on a longboat and proceed to raid monasteries and attack villages and Anglo-Saxon settlements to steal resources to build your new home, Ravensthorpe. From there you proceed to murder people and follow Eivor’s story of blind devotion to Sigurd, until it ends around 30 hours later in a frankly disappointing and nonsensical “plot twist” conclusion. 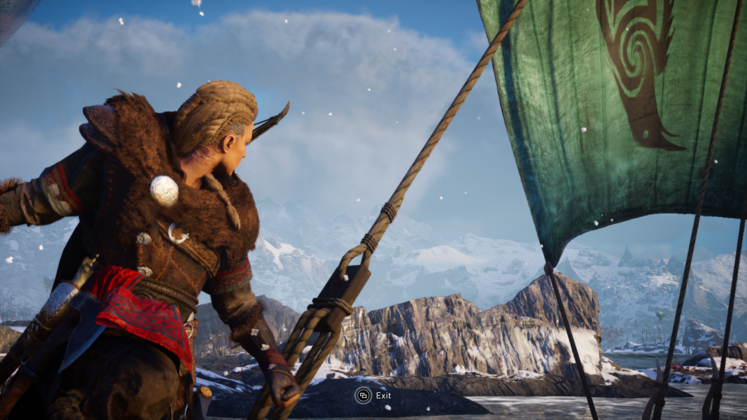 Those 30 hours are about the main missions, since the game itself is huge. Both Norway and England maps are giant, full of places to raid, little buildings to loot, and mountains to climb. The distances are also significant, which pad the runtime considerably by making you sail, horse ride, or sprint your way for several minutes between quest markers. Together with the side quests and side activities like a fight club, puzzles, and even the nerdy (and boring) equivalent of a Viking rap duel, the game easily reaches hundreds of hours of content.

As you may have noticed by now, all activities mentioned are intrinsically Norse in nature, and there’s very little mention of the Assassin’s Order. That’s because Valhalla is very much a Viking game, whose connection to the franchise as a whole is tenuous aside from the underlying Animus tech and the “Gods as Those Who Came Before” bit. While the latter was meant as a single-time revelation to further the current day plot, it instead morphed into a dead horse that keeps getting beat in all the new games – and Valhalla is no different. 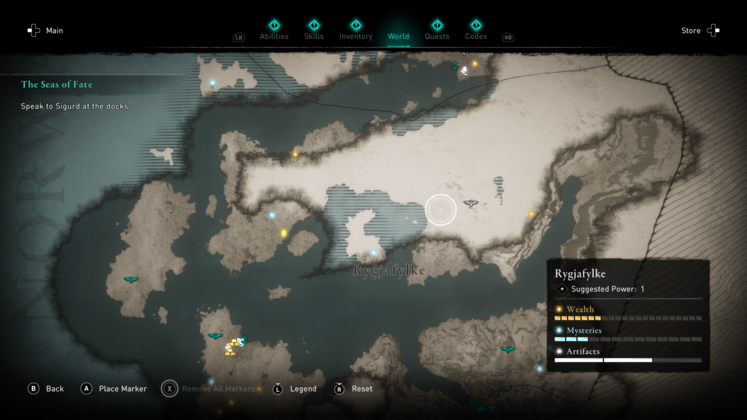 In fact, the only two real connections to the Assassin’s Order come from the presence of two random Assassins in the prologue, and then the continued presence of one of them in Ravensthorpe as you start to open Assassin’s Bureaus around the country. In essence, the main core plotline of the Assassin’s Creed series – hunting Templars and achieving peace in all things – is reduced to a B-plot, sidelined by the very non-Assassin’s Creed focus on raiding and pillaging and turning a peaceful countryside into a battleground by invading a foreign country.

I should be used to this by now, honestly. Assassin’s Creed hasn’t been Assassin’s Creed for some time – ever since Brotherhood, in fact – but there’s something about Valhalla’s complete disregard for the soul of the franchise that angers me to my core. As someone who loved the grey shades of morality and the deep wisdom at the heart of the journeys of Altair and Ezio, this new mindless, shallow “historical Witcher RPG meets God of War” take the series has devolved into is deeply disheartening. It is popular, certainly, and it attracts a bunch of demographics, but that’s because it is generic and ordinary – a game that pleases everyone simply never makes any point worth making. 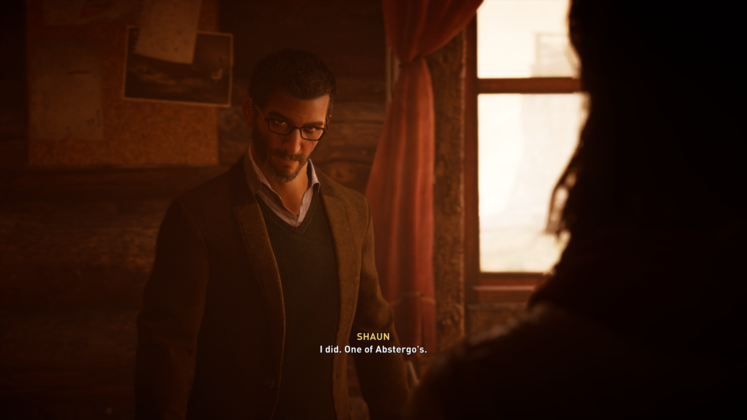 However, in terms of gameplay and solely gameplay alone, Valhalla is really interesting. The ability to climb almost anything is very similar to Breath of the Wild, and while a bit inconsistent, is good when navigating the less urban environments of Valhalla. I still dislike how the new games lack a proper city, instead focusing on wilderness – London was a major port after 680 AD and should by all means be sizeable as it steadily grew until it became the largest town in England in the XI century, but if you believe Valhalla’s depiction, it was little more than a small village during Anglo-Saxon times (it wasn’t).

Combat itself is a mixed bag, especially since the terrible Power system of level gating returns. I must admit I am much more favourable of the attack/counter-attack rhythmic gameplay of earlier Assassin’s Creed and the Batman: Arkham games, which manage to mix fantastic animations and flow with an almost musical like pacing. Valhalla continues the Witcher-like random combat of Origins and Odyssey, full of blocks and dodges and disgusting health bars, so the battles often are a mix of short and unsatisfactory to long and boring. At least you can assassinate people with one hit by changing one option in the settings. 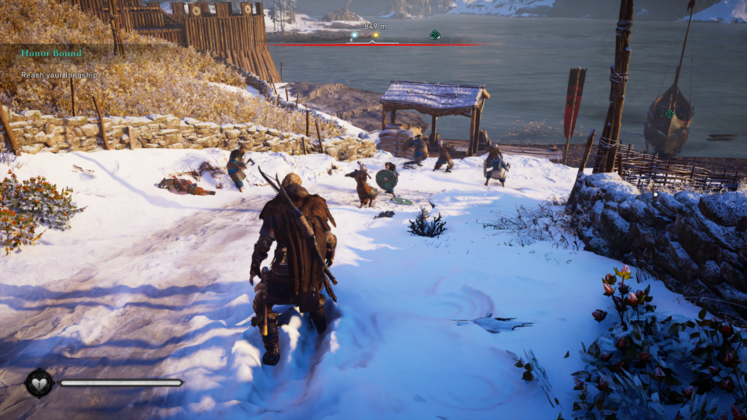 One good thing is the amount of customisation available, with armor, cloaks, helmets, bracers, and boots all able to be changed. You can even dual-wield weapons and shields, giving you some flexibility to favour your own playstyle. The bow and bird also make their return from previous games, giving you a way to survey terrains and engage enemies from a distance.

Stealth can play an important part in Valhalla, as you can either sneak into places by crouching or hide in crowds with your hood up – an alternative to the “run and gun” approach of going in swinging axes at enemies. The system is rather binary, meaning one enemy seeing you often triggers the whole area into alert, and you also can’t walk among crowds and push them out of the way like Altair did almost 15 years ago. 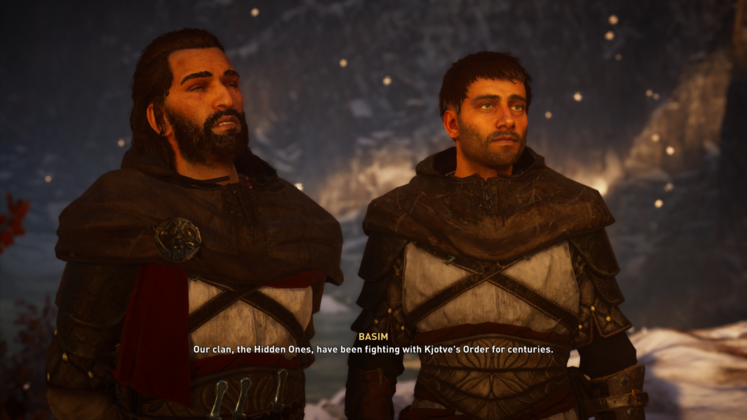 Performance and graphics are a mixed bag, ranging from good to terrible on both accounts. Voice acting is also shoot and miss, with especially the female Eivor sounding gruff and annoyingly hoarse in the exact same way that every single male protagonist of the early 2000’s did. Shaun and Rebecca are also back but completely devoid of their personalities, and Shaun in special is painful to watch – not because he magically morphed from Danny Wallace into an old Arabic guy, but also because he’s annoying-yet-endearing passive aggressive sarcastic personality is completely and utterly gone.

The music, however, is amazing, thanks to the return of Jesper Kyd to the franchise after almost a decade. The brilliant composer works with Sarah Schachner and Einar Selvik to create a gorgeous soundtrack which generates a fantastic landscape to the game. Unfortunately, even they couldn’t stop the studio’s egregious appropriation of Ezio’s leitmotif as a new faux-theme song – a composition that neither fits the bill nor carries any meaning in Valhalla. Every single note and chord of the original orchestration by Kyd back in ACII conveyed Ezio’s tragic journey from a child in a loving Italian family to the epitome of a Master Assassin, – but now, that same theme is just a bunch of notes that every game replicates ad infinitum, throwing it in at random moments as unashamed fan service like Odyssey did when using it as a pause menu track. 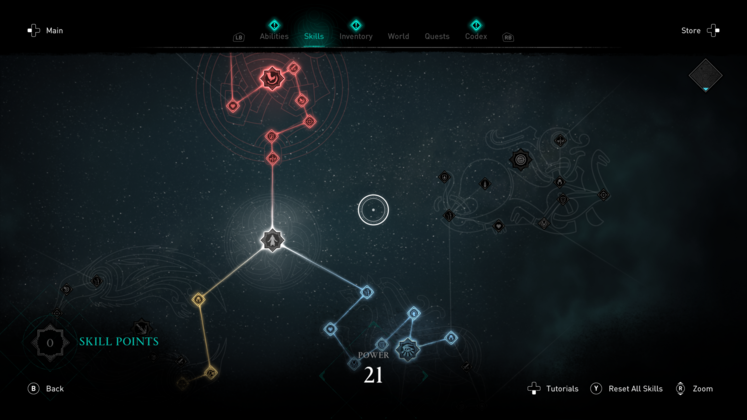 The reason why I am so adamant about Assassin’s Creed as a franchise is because that’s a topic ignored by all other reviewers, which is a huge slap in the fact of anyone that liked the original games and the message behind them. If you read any other review of Valhalla, you will see lots of praise about being a Viking or having a woman as a protagonist, but very little information about the fact that this game about Assassins doesn’t actually have that many assassinations in it. The franchise as a whole has long ignored both the “Assassin” and the “Creed” part of its name, and I constantly feel a huge swath of the playerbase – those that liked what the series originally stand for – is constantly overlooked by players who don’t care about any of that and just want an excuse to play as a Spartan or a Viking in an open world setting.

Assassin’s Creed was always about beliefs and morality, light against darkness, peace versus war. The very duality of the Assassins – that they take lives to save lives – was built into the eponymous creed and even onto Altair’s Codex. The first Tenet of the Assassin’s Order is “stay your blade from the flesh of an innocent”, but the very first thing you do after getting a hidden blade in Valhalla is going to raid an innocent village and attack a monastery an hour later. Brotherhood involves you building a community by inspiring the hearts and minds of the citizens of Rome, while Valhalla involves you building a community by stealing from innocent people and raiding priests in monasteries. 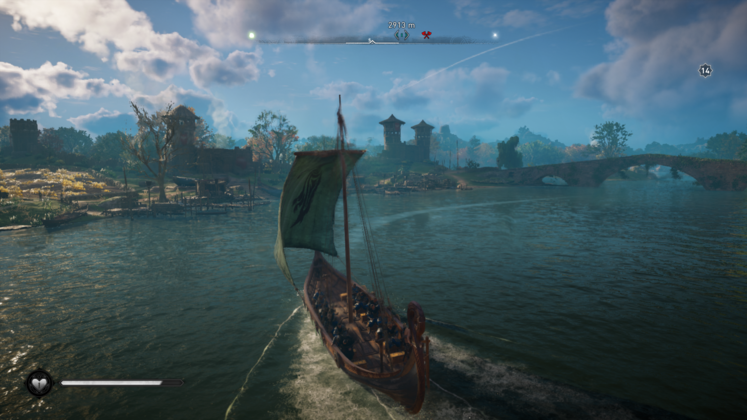 The truth is Valhalla is not an Assassin’s Creed game – it’s a Viking game. Like Black Flag was about pirates instead of Assassins, Valhalla also uses the Order as little more than window dressing, and the Assassins in the game impart their most guarded secrets and even a hidden blade to a random Viking man/woman with nary an explanation save a throwaway excuse later in the plot. Ever since Derby McTavitt replaced the fantastic Corey May as the lead writer of the franchise, the Assassin’s Creed series lost its heart and soul and became meaningless, and things like the very nature of Those Who Came Before became irreparably damaged thanks to Valhalla’s “reincarnation” idea and some twists later in the game I won’t spoil.

The original Assassin’s Creed – and the franchise as a whole – came at a time where games dared to be art. They grappled with difficult topics, like morality, religion, and the nature of wars themselves, and Patrice Désilets’ series in specific tackled the paradoxical fact that peace could be brought to the world by killing plague-bringers and war-makers – people whose very existence and activities prolonged conflict and caused the murders of millions. After Brotherhood, the series lost that heart, that compass – it became a senseless mix-match of ideas which all but abandoned the eponymous creed, and morphed into a senseless GTA/RPG set in the past. 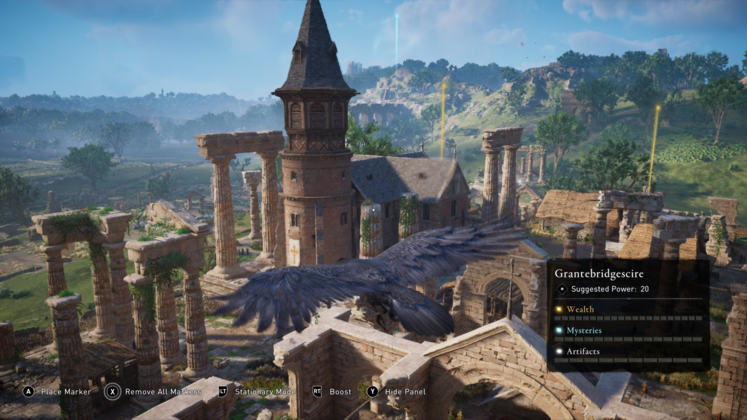 This is the final nail in the coffin of a gruesome transformation that started a decade ago with Revelations, and there’s no going back: the real Assassin’s Creed is dead, replaced by a festering bloated corpse that eschews philosophy and history for meaningless, Witcher-like knock-off romps through gamey environments. If you just want a game where you can play as a Viking, Valhalla is 100% the game for you – and it’s really good at it. However, if you want a true Assassin’s Creed game, I recommend you skip this one and reinstall the ones made by Patrice Désilets.

A great Viking game, but as far from a true Assassin’s Creed game as there could ever be.

Finally unlocking the leap of faith after 15 hours into the game.