Ugh! Scientists! You can always rely on them to screw things up. Like when they’re telling us that drinking alcohol or not drinking alcohol is good/bad/indifferent for you. That’s how Axiom Verge starts when our hero, Trace, gets all Gordon Freeman with a test chamber and sort of kills himself. Or doesn’t. Not too sure.

As you’ll be able to tell from the screenshots this is a Metroidvania game, reminiscent of, well, Metroid on the NES, where you advance in a linear fashion but gain abilities and weapons that allow you to do more exploration and reach areas you were unable to in the past.

It’s all simple, clean wholesome fun but the first few areas are deceptively easy to complete along with their boss battles. Barely an hour into Axiom Verge and you’ll start coming across enemies that require deft fingers to defeat - especially as Trace is only able to take a few hits in the beginning. Regeneration sends you back to a manual save point which is eerily reminiscent of the eggs in Alien, with all enemies respawned. 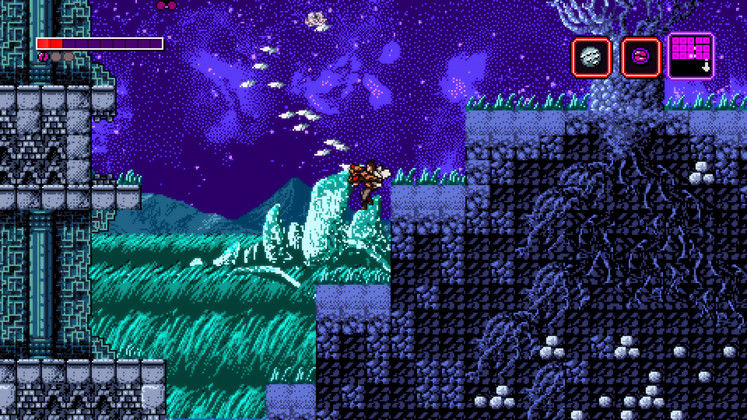 The pipes that connect each room aren’t the only form of travel and pretty soon you acquire a laser drill enabling you to delve through rock to reach more rooms and hidden places. This is just the start and the constant challenges and new toys to play with ensure it’s time well spent.

This means it won’t be to everyone’s taste but if you loved the challenge and style of those older Metroid, Another World-like games then Axiom Verge should bring you right back home.

You gain a basic weapon right at the start soon to be followed by one that can has a shot that can be detonated. This immediately leads to new areas only unlockable by using this weapon - a short, easy introduction to how the rest of the game and its map plays out.

Weapon upgrades are plentiful, increasing power and size alongside new weapons and items. To its credit Axiom Verge doesn’t put all its eggs in one combat basket as there is a fair amount of exploration to do as well. You can comb over each room you’re in to try and reveal its secrets or try and blaze as far ahead as possible to gain new weapons and upgrades. Most of the time it’s a case of balancing both as you’ll need new tools to unlock older puzzles.

The platforming controls are robust and responsive although combat isn’t quite up to the same standard. Some of my issues come down to the awkward nature of diagonally aiming - something that can only be done while also moving. In fact the whole dynamic of jumping and shooting feels awkward at times and when you’re facing a complex boss that you have to memorise firing patterns for, it can be very frustrating. Sure, a lot of that may be my own ineptitude but it feels like the controls aren’t doing what I want in these instances rather than me. 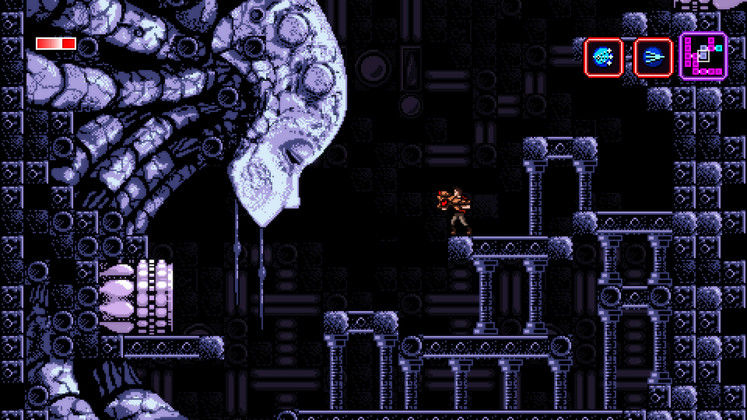 The voice that revives you, who or what is she?

Released on the PS4 in March this PC version has a few additions like Steam trading cards, achievements and cloud saves. On the gameplay side you can add a marker on the map - useful if you see an area inaccessible and want to return when you have the ability needed. Aside from the minor combat issue, Axiom Verge is a treat to play, joining the likes of Spelunky and the Binding of Isaac as the game I keep in one corner of my screen when I really should be working.

A homage to retro classics is one thing but having gameplay that’s both challenging and fun makes Axiom Verge special. If you grew up in that era, you’d be a fool to miss out on this and if you’re new to the genre, I can’t think of a better entry.

The shattering explosion at the end of every boss fight. 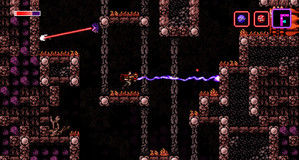