Back to the Future: The Game

Back to the Future: The Game Review

Strategy Informer sends you back to the... well, you know

Telltale Games has made a habit of getting licensed properties and spinning them into gold, as seen by such games as Wallace & Gromit's Grand Adventures and Strong Bad's Cool Game for Attractive People, as well as resurrecting old adventure games such as Sam & Max and Monkey Island. This is why Universal Studios approached them to make games out of their hibernating film properties Back to the Future and Jurassic Park.

Back to the Future: The Game has finally had all five episodes released, and the entire series is one huge love letter to fans of the series. There are multitudes of tiny touches that refer to the original trilogy, with Christopher Lloyd returning as Doc Brown. Claudia Black also returns as Jennifer, but while Michael J. Fox was unable to play Marty McFly, he does make an extended cameo in the final episode. Marty himself is done by a remarkably accurate performance by A.J. Locasio.

In the first episode, "It's About Time", in the year 1986 (a year after the events of the trilogy), Marty finds himself trying to stop a sale by the bank of Doc's possessions, as the inventor has mysteriously disappeared. When the time travelling DeLorean appears with only Doc's dog Einstein in the seat, and a frantic message from Doc, Marty has to hunt for the one person who seems to be involved with the situation, an elderly Edna Strickland.

From there, Marty finds adventure in 1931 in episode as he faces off against a notorious mobster in "Get Kid Tannen", then gets embroiled in an Orwellian Hill Valley in episode "Citizen Brown" as Doc Brown has turned into a Big Brother-like dictator. In "Double Visions", Marty has to escape the totalitarian nightmare and prevent Doc from marrying a woman who will ruin his life, and finally, in "Outatime", all of the plot threads are tied up, with plenty of sequel hooks to go around.

As a cinematic experience, Telltale Games has wisely gone with a cartoonish representation of the film series, which still allows for some genuinely frightening and tearjerking moments. The music just screams Alan Silvestri, while the writing is crisp and intelligent. The game is also genuinely funny; while most of the humor is chuckle inducing, there are a few laugh-out-loud moments. Much of the humor comes from knowing the series, so there are some jokes that will get a giggle from fans while fly over newcomers' heads.


The acting is also first rate as well, as Locasio gets all of the comedic beats of Fox down right, while Lloyd, whose voice is a little more haggard (what can you expect 20 years since the last film?), still has some energy to it. James Arnold Taylor steals the show, however, as an energetic, sarcastic and often times hangdog teenage Emmett Brown. Meanwhile Shannon Nicholson gets a thankless job of portraying the younger Edna Strickland, who is required to be a strident, shrill crusader, but still gets to convey some depth to the character.

As far as the puzzles, they range the gamut from simple to frustratingly complex. Telltale's hint system, however, will allow players to hum through the series fairly quickly. Each episode is roughly 2 hours long, so in total, the game lasts around 10-12 when played in successive order. The general mildness of the puzzle solving acknowledges that this is more interactive fiction than an actual game, though fans won't complain.

Telltale Games is selling the entire series as a bundle or individually from their official site. As an experience, especially for fans of the series, Back to the Future: The Game is a must-buy, as it allows them to indulge in Marty's world once more time - and enjoy a chaotic mind-screw of a series finale in Episode 5. For gamers, it's an amusing adventure game with few challenges but plenty of humor and well-acted characters.


BACK TO THE FUTURE: THE GAME VERDICT

You can purchase the series from Telltale Games here.

The final scene of Episode 5, followed by “Back in Time” by Huey Lewis and the News. It’s just amazing.

Back to the Future: The Game Essentials 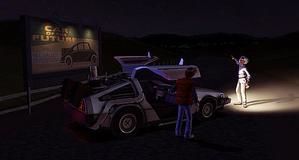