All form, no substance

Donning a semi-fantasy medieval cloth, Bannermen wears its inspirations on its sleeve, looking towards golden standards of the RTS genre such as Age of Empires and Warcraft III. But while old school sensibilities are what it attempts to capture by mixing base building with powerful hero units and magic spells, it fails in just about every way. While the form is definitely there, the essence that differentiates its inspirations from soulless imitators is thoroughly missing.

Bannermen greets players with dated visuals, muddy textures and ugly character models. Stiff animations turn battles into brief, robotic engagements, while its music, although half decent, repeats to the point of exasperation. By far, the most aggravating thing in terms of repetition, however, are its character lines. I despised hearing Lord Berrian jarringly answer “Yea” when issued an order by the third mission; and there are twenty-three of them to look forward to. With the exception of the narrator, who does a decent job, the terrible, cliché voice acting makes caricatures out of the game’s characters. 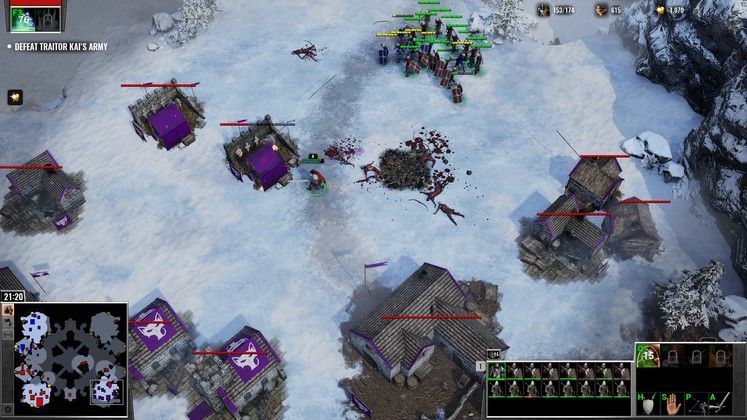 Bannermen’s sole playable faction is filled with generic medieval units from footmen and archers to armored knights and convicts that blow themselves up, taking other units with them. It’s a woefully thin roster and, worse yet, the campaign gives you little reason to use the more interesting units. I relied solely on footmen, archers, spearmen and knights –which make up around half of the available units– and breezed through it on normal difficulty. Not only that, but after a few upgrades, Berrian could take on defense towers by himself and even decimate bases if repeatedly thrown at the enemy.

If having just one faction wasn’t disappointing enough, none of Bannermen’s units have any real personality. A knight is just a bulkier footman that hits harder. Sure, it wields a hammer instead of a sword, but when you right click on an enemy, that expected satisfying feedback from steel hitting armor or soft flesh is missing. Although short, the twenty three campaign missions overstay their welcome well before the half point, only saving progress when completed. Not backed by an engaging gameplay loop, repeatedly destroying bases or moving your heroes to specific points on the map quickly turns into an unwelcome exercise in boredom. 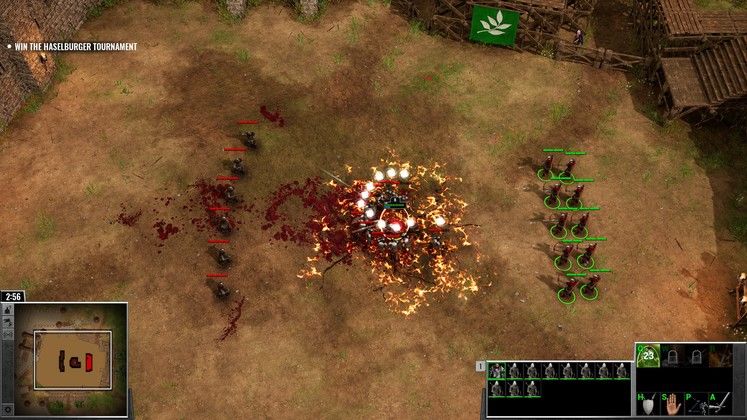 Bannermen tries to veer off this path by focusing on bits where you only control your hero and, occasionally, another unit or two, but the execution here is also rather poor. Enemies patrol and guard locations in packs small enough to make dispatching them extremely easy. The bigger focus on using abilities does manage to showcase your hero growing in strength, as you spend points on his four skills. It’s a pity that all of them, even an earthshattering slam, feel limp due to aforementioned animation woes and lackluster sound effects. On the flipside, I looked forward to the breaks they provided in between missions that included base building, simply because they took less time to complete.

From start to finish, Bannermen’s campaign pits you against extremely basic AI that just sends handfuls of troops your way at fixed intervals. Throughout it, I encountered no variation in its behavior. Bannermen doesn’t even try to hide the simple processes that run under its hood, which shatter any hopes of immersion. The worst offender is a tournament-style mission that literally teleports units back to the starting point at the beginning of each round without even attempting to disguise it. The scarcity that plagues the roster leads to very few options in terms of tactics and strategy. The most straightforward and effective approach I found was getting a small troop of knights, spearmen and footmen to follow Berrian. His shield ability would aggro and soak damage, while they wreaked havoc on the enemy base. 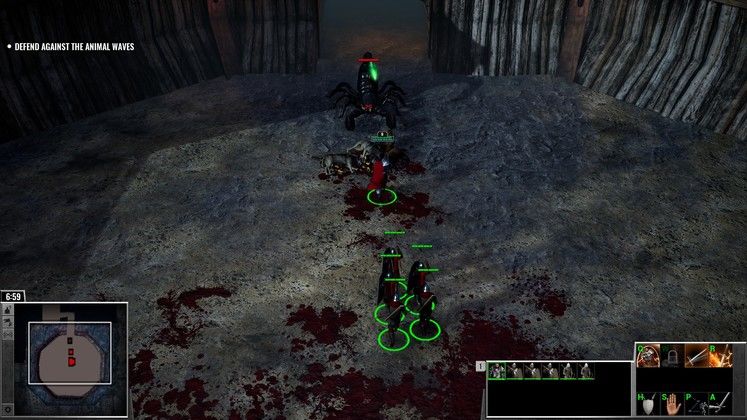 Bannermen touts its nature powers as magic abilities that can change the course of battles and, although that’s accurate enough, using them feels as underwhelming as using any other ability. Unleashing a cold attack upon enemies quickly drains their HP but there’s no satisfying visual or aural feedback to suggest that you’re harnessing a fraction of an unstoppable force. Units just fall to an ugly blue glow; yellow if the map gives you a holy power instead. Unlocking nature powers requires building Temples at fixed points on the map, which the AI completely ignores if not on its one or two pre-determined paths.

Temples represent a higher stake in Bannermen’s multiplayer, where human opponents aren’t limited to one or two orders. It’s where you’ll also want to start using defensive towers and playing more carefully. With both ranked, unranked and versus AI modes on show, alongside seven maps supporting between two and eight players, PvP matches can tide you over for a while. However, the single playable faction makes it so that perpetual mirror matches become tiring after a short while, even if it allows you to recruit one of three heroes, including the campaign’s big bad. 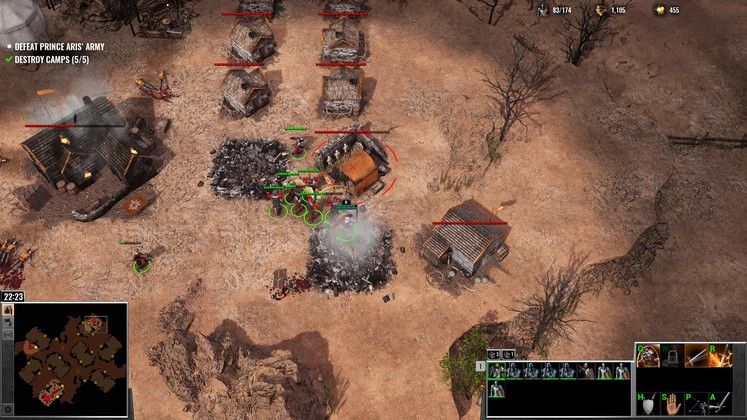 Bannermen’s story is a hodgepodge of events forcefully tied together with virtual duct tape. Its highest point lies with the intro cutscene which depicts the desperate battle that sets Lord Berrian’s quest in motion. Afterwards, it’s a downwards spiral of stereotypical main characters that lack any semblance of character development, alongside secondary characters who get suddenly introduced, only to disappear shortly afterwards. The action also jumps around from frozen plain to desert and forest in what feels like an instant, rather than a lengthy march across an entire kingdom.

Bannermen only crashed a couple of times during my 15+ hours with it. However, units had a tendency to block each other off, even in open fields, resulting in footmen slowly pushing into bowmen firing at enemies, instead of going around. They’re also fond of occasionally getting stuck on terrain or forgetting orders. The HUD itself is a little simplistic, lacking tooltips describing buildings and an easy means of quickly selecting the hero. Luckily, control groups and switching between units are quite snappy.

Bannermen’s appreciation of genre greats can be easily seen through the cracks in its shoddy construction. However, in between a single faction with a small, uninspired roster, bland story and writing, and very few options in terms of tactics and strategy, it’s tough to recommend. As rooted as it is in the genre’s past, it’s nowhere close to mastering what made RTS titles of yore great, ultimately being just a flimsy, soulless imitator.

Watching the intro cinematic that sets the stage for Lord Berrian’s journey throughout the campaign.