BattleBlock Theatre performs its Steam premiere, but are we throwing roses or tomatoes onto the stage?

BattleBlock Theatre is batshit crazy. It was when it released last year on Xbox Live Arcade, and it is now as it releases on Steam. But that is definitely a good thing.

Hatty Hattington, glorious leader and “best friend to one and all”, leads a crew of mates with humourously-shaped heads aboard the SS Friendship. That’s right - a ship, filled with friends. Friendship. Even after this very first, very blunt joke, it becomes almost unsurprisingly obvious that Castle Crashers masterminds The Behemoth are behind 2D puzzle-platformer BattleBlock Theatre, as they serve up some familiar slapstick-cum-tongue-in-cheek banter the way they know best: via garish and whimsical characters, button bashing brilliance, and diarrhea-infused humour.

After a tumultuous voyage across the ocean, the SS Friendship runs aground on a mysterious uncharted island run by evil cats. Brought to life by the amazing narration of Will Stamper, we learn that the peninsula is controlled by a colony of nasty prison-keeping cats, hellbent on abducting the ship’s remaining crew, and pitting them against a series of twisted challenges for their amusement within a makeshift theatre. Placing their trust in Hatty to save the day, the crew are amazed to discover he has flipped allegiances, but do become inherently suspicious of the evil-looking, yet entirely stylish, glowing red tophat he has forcibly acquired since crash landing on the island.


And so it is then up to the player to traverse each level, of which BattleBlock Theatre boasts more than 80, collecting a series of green gems which our customisable puppet-like protagonist must obtain before unlocking an exit in the quest to save Hatty and escape this wretched island. A minimum of three gems is required to beat each stage, but surplus gems not only increase the player’s chance of securing the coveted A++ rank for each zone, but can also be used to rescue prisoners at specified locations on the world map screen. Balls of yarn can also be snapped up and used to unlock bonuses and power-ups in the prison’s fairly extensive black market, and golden top hats offer multiple gems if safely delivered to the exit whilst avoiding death. Players can get by without hitting the A++ mark, however the appeal of exploring what each stage has to offer often results in inadvertently scavenging each level’s batch of goodies en route, not to mention facilitating obvious replay value.

BattleBlock Theatre controls like a dream, and the game’s exquisite level design is by far its defining feature. From springboarding blocks, to manually drawing boats nearer by generating waves; from jetpack propulsion, to landing that inch-perfect jump onto a vanishing platform, BattleBlock’s levels rarely repeat themselves. Even on the few occasions where they do, these tricks never seem to lose their appeal as the seven to eight hour campaign keeps on giving and giving.

Earlier levels introduce challenges individually, but a beautifully subtle and gradual learning curve eventually sees the player overcoming several obstacles at once, building upon the skills and knowledge the game has imparted previously. Besting these gauntlets, then, becomes that bit sweeter with each successful bout, as the player feels a genuine sense of achievement after each obstacle is beaten in turn.


With such masterful level structure, which combines standard platfomer spike pits and water pool practice with intricate puzzling, it seems a shame that BattleBlock Theatre’s combat is easily its weakest aspect - particularly considering how well forerunner Castle Crashers handled this area. The majority of foes BattleBlock throws at the player feel out of place at best, and utterly disjointed at worst, as more often than not the high-speed platforming in which the game so excels is what suffers first at the hands of clunky set-tos.

The Steam version introduces weapon switching which certainly makes things a little easier, but, particularly in the game’s latter stages, I was left more confused than challenged with the ridiculous amount of explosions and deranged cats plaguing the screen at once. Although clearly playing to its idiosyncratic humour, had The Behemoth cut back on this burgeoning level of action - or perhaps even offered more ways to get around these forced confrontations - BattleBlock could have better maintained the excellent precedent set by the puzzlery in its first two-thirds.

Although the game’s single player story mode is BattleBlock at its best, various co-op and multiplayer modes are also on offer, adding even more replayability value for those tenacious perfect score hunting obsessives. The polish here noticeably suffers, but there is still plenty of fun to be had in co-op, pushing, pulling and throwing your partner across the range of maps. Zipping camerawork allows the pace of the dual endeavours to run as smooth as it possibly can, however the same overcrowding afflictions suffered at times in story mode make co-op good, instead of great; again, a shame as BattleBlock’s predecessor did so well in partner play.


A versus mode has players faceoff against each other and the clock, and a myriad of single and co-op challenges will keep those looking for bite-sized chunks of play time happy. Assuming BattleBlock Theatre can attract similar levels of attention as its Xbox Live iteration last year, multiplayer on Steam also remains a very exciting prospect, not to mention the possibilities the game’s easy-to-learn level editor promises via Steam Workshop.

In essence, BattleBlock Theatre is not without its frustrating moments, but such is the nature of all puzzle platformers. Any negatives noted here exist, but are slight and surely nothing more than minor blips in what is a very rewarding, very well presented, and very enjoyable and hilariously funny puzzle platformer. As the landscape of these types of games becomes increasingly bigger, it’s nice to see a game strive so hard for innovation. And in doing so can make the player feel like the cat who got the cream. Perhaps I should leave the jokes to The Behemoth experts.

In essence, BattleBlock Theatre is not without its frustrating moments, but such is the nature of all puzzle platformers. Any negatives noted here exist, but are slight and surely nothing more than minor blips in what is a very rewarding, very well presented, and very enjoyable and hilariously funny puzzle platformer. As the landscape of these types of games becomes increasingly bigger, it’s nice to see a game strive so hard for innovation. And in doing so can make the player feel like the cat who got the cream. Perhaps I should leave the jokes to The Behemoth experts. 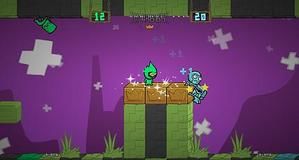