If you want blood, you got it

The sun on your face, the wind in your hair and elven blood on your boots. The fantasy ultraviolent sport of Blood Bowl returns for a second helping. It is a digital interpretation of the Games Workshop boardgame that sees fantasy creatures such as Elves, Orcs and Ogres go toe to toe in a game of fantasy American football. Both teams line up on opposite sides of the pitch and will punch, kick, stab, pass and run their way to as many touchdowns as possible. Whoever scores the most touchdowns wins.

If you want blood, you got it.

With it being a digital boardgame, that means there is a lot of rolling dice, and this is going to split a lot of you. Some of you will hate the fact that your best laid plans can come undone on the luck of a dice roll, while others will relish it and laugh at both you and your opponents misfortune. And that really is the spirit of Blood Bowl.That and bribing the referee so you can get away with stamping on a Goblin’s throat.

Matches are turn based, you’ll allocate actions to your players such as blocking opponents, and attempting passes etc. Attempting is the key word as dice are your adversary at every turn. It is all part of the humour and nature of the game though that’s what makes Blood Bowl a hell of a lot of fun. But, if you can’t laugh when your star Human catcher receives the ball, dodges his way through a Troll’s tackle zone only to slip on the edge of the end zone and break his neck, then maybe this isn’t the game for you.

A faithful digital interpretation of the Games Workshop board game

The main strength of Blood Bowl is of course the playable races. Each race plays in a different way, the Dwarfs for example are slow and immobile but are so heavily armoured it’s impossibel to get them off the pitch. The Skaven are lighting fast and can dodge enemy attacks, but are incredibly fragile. And then we have the Orcs. As we all know Orcs make the best Blood Bowl players, they offer a nice balance between speed and power and once they’ve dismembered the opposition they’re not bad with the ball either. Can you tell I really like the Orcs? There’s just something incredibly satisfying about securing the ball, forming a cage and then carving a bloody path to the end zone. And then of course we have the posing High Elves and their cowardly passing game, but the less said about those girls the better.

When playing in league play, your players will earn experience from completing actions such as injuring opponents, completing passes and scoring touchdowns. As your players level up you can unlock new skills that help to mitigate the dice element in the game by essentially giving you re-rolls for certain actions or giving you bonuses. It’s incredibly satisfying watching your team grow from fresh meat for the grinder to hardened Blood Bowl stars. Conversely it’s also devestating when your star thrower suffers a horrific injury or even worse dies on the field of play. Although to be fair, there is nothing funnier than murdering your opponent’s best player. Yes, I am a bad person.

One of the new additions to Blood Bowl 2 is a story driven campaign mode, which is unfortunately dreadful. It is essentially a 10 hour tutorial and aside from having a few amusing moment from the commentators it won’t provie you with a challenge or anything of value. In fact I completed the campaign with only conceding one touch down. You can also form leagues and cup competitions with AI teams to play through, but the computer controlled teams will never give you as good a game as a human opponent and multiplayer is where Blood Bowl shines the most. 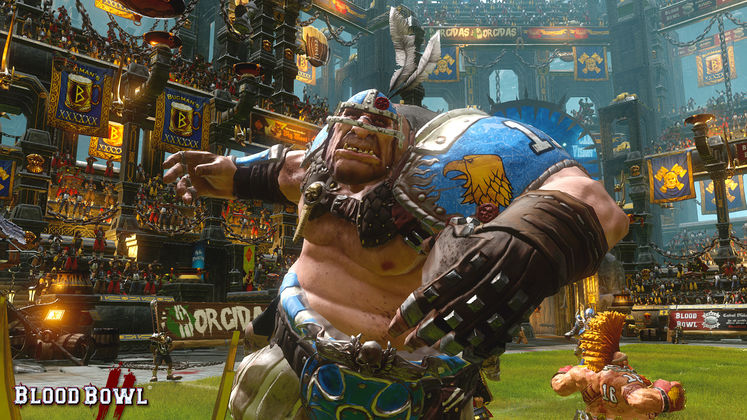 Ogres are tough, but unreliable

There are options to create a vast amount of leagues with your friends or you can delve into any of the many, many public leagues and do battle with strangers. You will learn more about the game and prioritising your turn order, team composition etc by playing against good human players than you ever will playing against the quite frankly awful AI.

Cyanide have beefed up the visuals and the player models are, for the most part, extremely well detailed and inkeeping with the traditional look and feel of the Warhammer universe. New animations have been added, the UI has been neatened up conisderably form previous versions.

But, the swanky new animations that the game is so keen to show off every time you make a block and the re-winding every time you use a re-roll just slows the game down. And it plays at a… relaxed pace as it is. There are also plenty of clipping issues too, especially with the Skaven attack animations.

Bizarrely, lots of other touches and polish seems to be lacking here that were present in previous versions, such as all of the spectators being human and having the exact same face, all of the cheerleaders are human now nomatter which teams are playing on the field. Where are my Orc drummers? 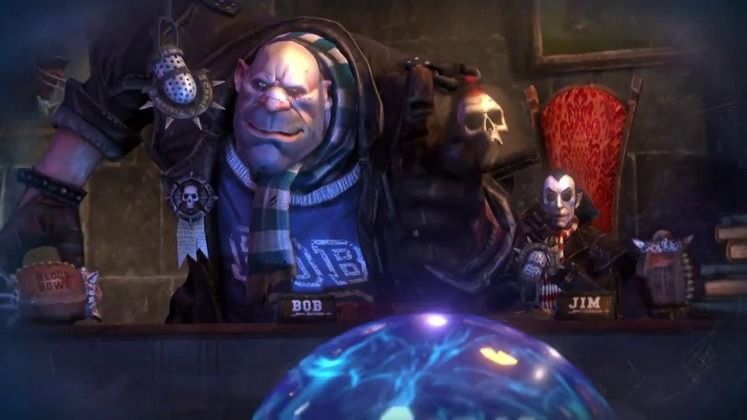 The commentary team are amusing, but the repetitive lines start to grate

One severe irritation is the formation set up before a match. You have the option to place your players how you want and then save the formation for use in later games. The problem however is that this system is completely unfit for purpose. Players literally stroll, one at a time, to the position you select for them making it infuriatingly slow to tinker with your formations. And then when you load your saved formations all of your players are in random positions, meaning that you have to manually set it up all over again. How this got passed QA testing I’ll never know.

And now we come to the biggest bugbear I have with the game and that is the amount of races available, 8 in total. Considering the previous version of Blood Bowl had around 23 playable races and catered for everybody, including a mere 8 is a bit of a slap in the face for fans. Particularly long term fans of the boardgame. Some people will have been playing as Undead, or Wood Elves or Chaos Dwarves for decades and will have to stump up for the base game and DLC in the future to play their favourite teams. It does leave a nasty taste in the mouth as the sheer volume of incredible fantasy races to play as are what makes Blood Bowl great and sadly this smacks of greed rather than limitations.

Blood Bowl 2 is a faithful recreation of the board game with improved visuals and a cleaner UI than previous installments. The AI is as poor as ever but multiplayer is really where Blood Bowl 2 shines. The inclusion of only 8 races is extremely disappointing though as is the lack of overall polish the game has. If you already own Blood Bowl Chaos Edition, sadly Blood Bowl 2 doesn’t really do enough to justify owning both unless the multiplayer community decides to migrate. It’s still a lot of fun though, especially in multiplayer.

Surrounding a High Elf thrower and pounding the pointy-eared poser in to dust.