So here we are comparing World of Warcraft’s Arena PVP to Funcom’s latest online title, Bloodline Champions. Bar the obvious similarity between the two - both focus on arena based combat - that’s where it ends. That’s really all you need to think about when considering the two games – after all, one is cog in a gigantic MMO wheel while the other, Bloodline Champions, is an accessible, competitive RPG based around strategic teamplay.

With the inevitable comparison out of the way we can now focus entirely on what is essentially gladiatorial combat with a fantasy overlay. Following a helpful tutorial, you’re thrust into the world of Bloodline Champions – one of buddy combat that has you constantly attempting to out manoeuvre the enemy team.


The majority of your time is spent in the glorified server browser. Funcom doesn’t do padding and Bloodline Champions is split into two parts. First is the hub, a fancy UI where you prep for matches, learn about the game and handle mundane account details. Think of it as a fleshed out, internet enabled version of the Mortal Kombat character screens.

The second component is much more simple; combat.

But before we get to that it’s necessary to explore the administrative part of the game. You see, being a free download game supported by microtransactions is often an excuse to be lazy and while we say there’s no padding, that doesn’t mean you’ll be staring at a spreadsheet and a web browser.

Bloodlines has a wonderfully simple UI that’s consistent with the art style of the live combat. From the home page you’re able to enter ladder based combat (1v1, 2v2, 3v3, 4v4, 5v5), check detailed statistics of your career, jump into open, non ranked games or simply chat to the busy community.

One of the most important things for a PVP game is the ability to find someone to play with. With Bloodline it’s easy to search for a game that suits your skill level while filtering for any other requirements that you desire.

If you’re without an immediate match, asking around for people is quick and painless. The chat channel is always filled with players asking for healers, tanks, DPS (Damage-Per-Second) support. What this does mean is that if you’re a fan of less common classes, you’ll find your services often requested – something that’s nice for those who specialise in support service.


However, if finding human compatriots proves too difficult, there is a Single Player component that’s perfect for learning a class’ abilities and acclimatising to the speed of the game. It is essentially the option to train against bots.

It’s obviously less challenging than the multiplayer, but what it does allow you to do is learn your chosen bloodline without being continually crushed. Also it’s worth noting that the Single Player is hardly the lifeless ‘hit-a-dummy’ event we’ve come to expect with other games. The CPU happily throws geeky taunts in your direction - like “hahaha pwned,” etc - as they play, mimicking the real life atmosphere of a competitive match.

Friends lists, character development, item and weapon upgrades, achievements – it’s all there. For a free game, it’s a fantastic piece of work, especially when you consider the amount of classes available for play.

Each with their distinct character, play style, equipment and appearance, there are twenty to choose from. While they follow the established fantasy archetypes that dictate the genre, Funcom have injected a fair amount of creativity into their design to ensure the player never feels as if they’re fighting an army of clones.

You’ve got five of each play types -healing, ranged, tank and melee (DPS) – to choose from and everything varies from character to character. Their run speed, height, attacks, finishing moves – it all depends on who you choose. The more faithful you are to a character, the better they get. There’s no grinding for abilities with Bloodline – you’re ready to go out of the box.

Following your character choice, you’ll jump into combat. What follows is around two or three minutes of mayhem as everyone attempts to destroy each other. Healers heal, tanks bundle ranged players and melee classes dish out the damage. If you come across a good team, one that’s supported with VoIP, your team of random recruits will fail every time. Bloodline Champions really shines when you’re partaking in coordinated play especially in the rank ladder matches which have full team support and customization.


The controls are perfectly laid out and the lack of mana (Bloodline Champions prefers to rely on time-cooldown abilities) means after a bit of practice you’ll be bounding around the beautiful environments crushing your foes at ease. Learning the different arenas helps for positioning and once you start thinking about how you’re playing; more enjoyment can be gotten from it.

Instantly accessible, free for the base game, an active community that’s happy to accommodate new players and a combat system that’s got plenty of room to grow, Funcom have whacked this one out of the park. It’s good to see something come out of the promise that was shown in Age of Conan.

Instantly accessible, free for the base game, an active community that’s happy to accommodate new players and a combat system that’s got plenty of room to grow, Funcom have whacked this one out of the park. It’s good to see something come out of the promise that was shown in Age of Conan.

Literally crushing an opponent into the ground with an aerial attack. 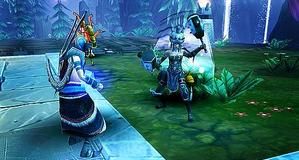