A potential diamond buried under far too much rough

Ceres is a space strategy tactical RPG simulation… thing. That’s a mouthful, and Ceres is a pretty complicated game. You begin with a single ship, to which you can issue strategic commands for attacks and movement. Your ship has a captain which will gain experience, level up, and get new skills and perks along the way. You’ll take on missions and explore the solar system in pretty much any way you want, since there’s no limitation on your progression beyond the capabilities of your ship and the danger of the enemies you find along the way.

A potential diamond buried under far too much rough.

It all sounds great, in theory, and for a certain type of player, Ceres is going to be an incredibly deep, rewarding experience. Your ship–and, eventually, your fleet–is fully customizable, down to the choice between fixed and rotating turret emplacements. You’ve got to watch power consumption, understand the effect your captain’s skills has on the performance of the ship and crew, and figure out how to manage your cargo space between ammunition, repair materials, and trade goods. In combat, you’ll have to keep track of your facing and armor damage across different parts of your ship, keep track of your ammunition, manage a dozen different types of attack drones that can be individually launched by every ship in your fleet, and understand when to focus your lasers on attacking enemy ships or shooting down enemy missiles. Imagine a space sim–maybe a Privateer or Elite: Dangerous–with all the complicated considerations of managing your ship’s systems, then imagine needing to do all of that across a squadron of a half-dozen ships.

About five hours in, I felt like I was just barely beginning to understand the game. I was exploring the starting zone with my lone ship, searching for missions and mining opportunities. I docked at a remote space station and accepted a mission to settle a mining dispute some distance away, and went to trade at the station’s stores before heading out. Suddenly, the station was under assault from an entire fleet of pirate vessels. Thankfully, the station was well defended, so the battle was going in our favour. It was going so well, in fact, that I decided to explore a new game mechanic–capturing enemy vessels. I knew this was possible, since various tooltips had alluded to it, but the actual process for capture had never been explained to me. So I took my best guess, and hacked the enemy frigate to temporarily disable it and launched my boarding drones. And, after several minutes without feedback, as other vessels exploded all around me, I got a notice that the ship was captured and now in my fleet. Awesome! I finally had an additional vessel to command–but it didn’t really seem like it could move or attack well. Maybe because it was damaged in the battle? Whatever, I’d figure it out after the battle, so I moved the new ship a safe distance away. 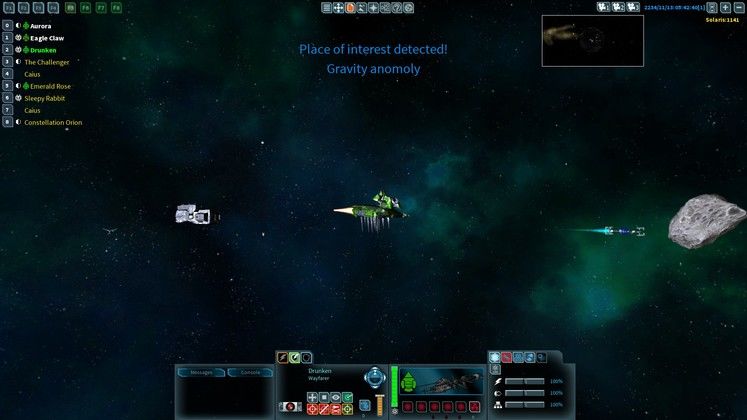 The squad is ready to roll

In the meantime, multiple giant capital ships had arrived, and while they would have certainly been able to destroy my little frigate, the station was taking them down with ease. Suddenly, the fight’s over. I returned to the station to refit and repair both my ships and sort through the salvage from the battle, a process that took about ten minutes. When I left the station, though, I realized that the enemy capital ships were still there, floating in space, but seemingly functional. Could I capture them? I tried launching boarding drones like I had before, but it didn’t work. Then I realized I could select the ship directly and launch drones through there. But the second I did, every single turret on the station turned hostile and blew me out of space. I lost half an hour’s progress through fiddly inventory management and arcane combat maneuvers. It turns out that those had been friendly ships all along–they just happened to have the exact same name and design as the enemy ships I’d just been fighting.

That experience more or less sums up my time with Ceres. It’s got a ton of depth, and so much potential for strategic planning and for interesting things to dynamically emerge from the game systems, but it does a terrible job of explaining itself. There’s so much depth and complexity but it’s all obfuscated in completely unintuitive ways, and that goes from high level game mechanics all the way down to basic controls and commands. When I started the game, I spent 45 minutes in the tutorial, then a couple of hours playing, then another 45 minutes in the tutorial and I still felt like I had only the most tenuous grasp on the basic mechanics. I’ve laughed at games that take a number of hours to get good, but Ceres is a game that takes an astounding time investment just to be understandable. 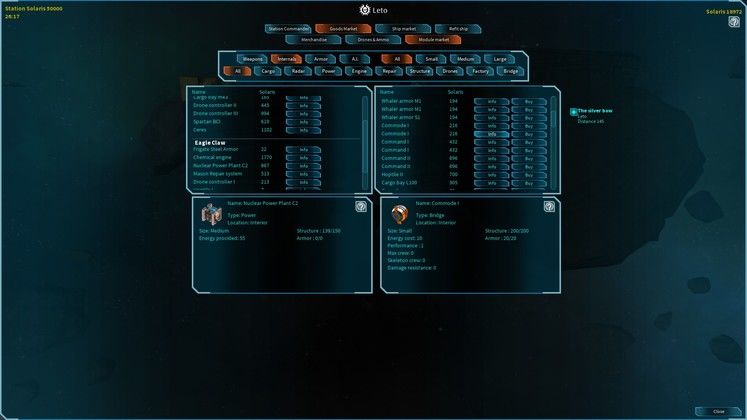 Forget pirate fleets, this menu will be your greatest enemy in Ceres

And even when you’re pretty sure about how the game’s supposed to work, there are quirks. It’s damn near impossible to tell at a glance which ships you have selected, and good luck ever trying to pick out and issue orders to individual drones. Giving specific movement commands to your ships is an insane, arcane process that requires you to slowly, carefully manage both the X and Y coordinates of your cursor before issuing the order. You can give a more general “move in that direction” command, but it’s difficult to tell where and how your ship will maneuver to get there, which is critical to carefully manage during combat. The amount of granularity with which damage is tracked on specific ship parts means that you’ll want to maneuver your vessels in very specific ways to take advantage of that damaged armor, but there’s no way to control your ships that carefully.

Then there are the menus, which are a special kind of nightmare. Replacing parts on your ship will require you to go to a refit menu, figure out the size of your empty slots, go to a shop menu, compare and contrast the abilities of different items, and return to the refit menu to update and customize your ship. Then you get to do that up to five more times for each ship in your fleet. The map always seems to open on an obscure, distant edge of the area, and places aren’t labeled to give you any indication as to what those points actually are. Is “Nestos” a station or a ship or an alien death whale or…? 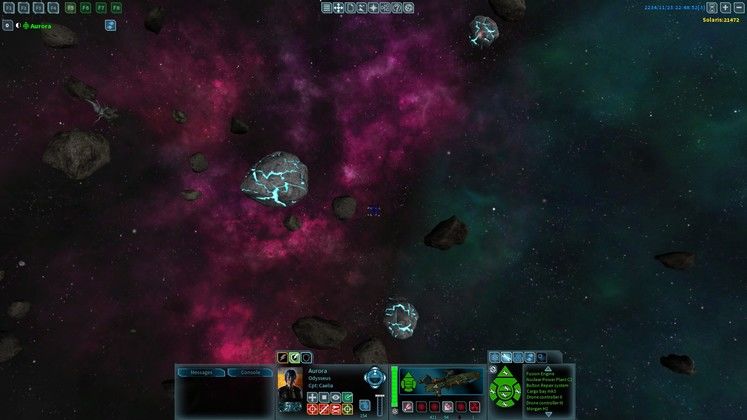 Time to get into some hot water mining action!

Then sometimes it just breaks. I’ve had my ship occasionally just refuse to move. Issuing movement orders to your entire squad will send each ship careening off in different directions. Sometimes the model representing your ship will get stuck in the solar system map, rendering you unable to move between locations. When you try hack a ship a meter will show your progress, but if you select anything else while the hack is going, there doesn’t seem to be any way to bring it back or see when the hack is complete. The developer has been implementing lots of patches and updates, but there are so many technical and interface issues that it seems nearly insurmountable.

Ceres is trying for so many interesting, exciting things, and it’s offering them through a game with an old-school devotion to freedom and non-linearity. It’s a wonderfully complex, deep experience that allows tons of customization and an incredible amount of freedom in how you explore… I think. But it’s so difficult to access that depth behind the poor tutorials, terrible interface and lack of feedback. You’ve got to work for hours upon hours to reach anything approaching competence, and it’s tough to recommend that investment to any but the most hardcore of space strategy tactical RPG simulation enthusiasts.

Finally figuring out enough of the mechanics to finish any mission after the first. 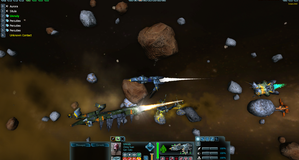