Smash from the past

With its spritely J-rock music and top down, twin stick shooter stylings, Circuit Breakers is as heady a retro trip as you will likely ever experience this side of Capcom’s Megaman Legacy Collection. Like all the best arcade shooters from yesteryear, Circuit Breakers dispenses with the all non-essential stuff, such as a story, to provide a lean, yet fundamentally sound shooter experience that we just simply don’t see enough of on PC these days.

As you might well guess, the principle of Circuit Breakers is wonderfully simple. You and up to four mates must enter a room, destroy as many robots as you can and then move onto the next before doing the exact same thing again. Clearly, it’s the sort of affair which gets exhaustive if played for extended periods of time but as per its arcade roots, Circuit Breakers is best enjoyed in small bursts and with a bunch of friends on hand to take part in the carnage. 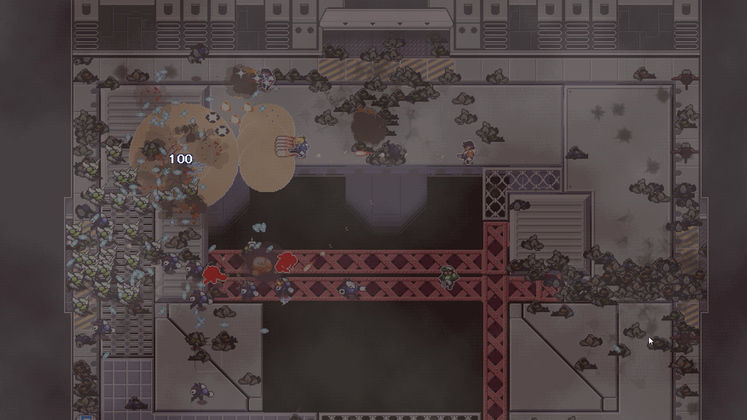 Part of the charm of these games has traditionally been the ease at which someone can pick up and play them with precious little prior experience and this is something that the developer behind Circuit Breakers has ostensibly embraced, crafting an arcade shooter which is easy to get into but predictably difficult to master. Compounding these fundamentals are four very different characters to choose from, with each possessing a different weapon that in turn accommodates a variety of playstyles as a result.

Aldo and his machine gun are perhaps closest to the twin stick archetype that we all know and love; allowing the player to effortlessly strafe and shoot enemies with a constant barrage of lead; he is arguably the best choice for beginners starting off. Samson also proves to be a good choice for twin-stick shooter rookies too, since his single shot rocket launcher can cause massive splash damage while demanding little accuracy against larger groups of enemies.

Next up is Tay, who proves to be an especially interesting prospect since her laser doesn’t function in the manner that you might expect. Rather than allowing the player to strafe and rotate a beam of death, Tay’s laser instead fires a column of light which sustains itself for a split-second beginning at the location it was fired from rather than the current location of the player. Finally, the shotgun toting Shelby is perhaps best suited to more experienced genre stalwarts with a short range and modest spread, this character does most of his work far closer to the enemy than his comrades and thus incurs the most risk as a result.

While the quartet of robot-busting heroes that you can choose from adds variety to the proceedings, it comes as a welcome surprise to discover that Circuit Breakers has an assortment of deeper elements lurking underneath its hood, resulting in the creation of something that feels original, yet still welcomingly familiar. Chief among these is the novel method that Circuit Breakers possesses for powering up your chosen hero.

Rather than just scooping up power-ups, it’s based on a meter which is filled by collecting crystal shards but is depleted by firing your weapon. Once the meter has been filled, you effectively ‘level up’ and your weapon becomes more powerful, although this also increases the amount of shards that are required to level up next time. Additionally, the meter can also be used to provide your character with a robot shredding shield for a short period of time too, meaning that there is a fair bit of tactical awareness intrinsic in its use while encouraging players to consider accurate fire in the sort of game that would normally advise against it. 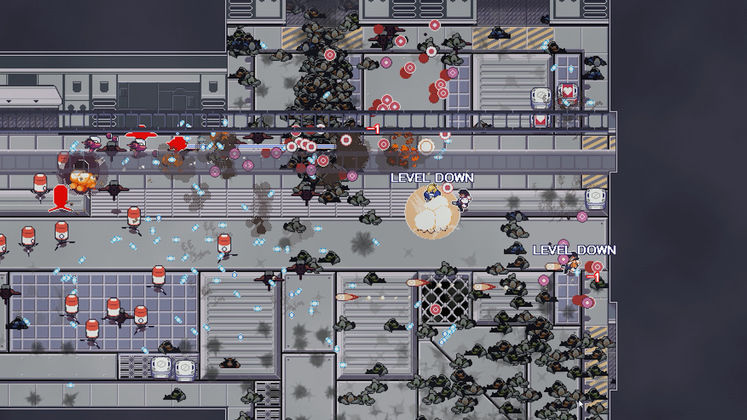 A screen rammed to the brim with robots, bullets and corpses is pretty much the norm for Circuit Breakers

Speaking of tactics, Circuit Breakers turns out to be even deeper still the more you play. For example, health replenishing hearts are locked within containers that must be blasted several times. The thing is you don’t want to be doing that when surrounded by bad guys so it pays off to destroy the crates during a quiet spell so that you can scoop up the health later on with little fuss. It’s this sort of pre-emptive planning that later in the game especially, meaningfully separates Circuit Breakers from the twin-stick blasters of old.

Where Circuit Bracers especially wears its classic inspirations on its sleeve, is through its embrace of that oldest of gaming incentives – the high score. With an endless arcade mode, an unlockable boss rush mode, time attack, challenges and more besides, Circuit Breakers provides no shortage of game modes for players to perfect their craft while online leaderboards keep folks in the know regarding the top players which need to be beaten. A special mention must also be given to the bosses themselves – a collection of bizarrely proportioned mechanical behemoths with screen-filling attacks, these enemies are as challenging and fun to tackle as they are bewildering to behold.

Like any arcade shooter worth its salt, Circuit Breakers supports multiplayer and is arguably the best way to experience its delectable retro delights. It’s certainly a shame then that while local multiplayer is present and is consistently entertaining, its online counterpart sadly doesn’t currently exist in a working fashion (the included online beta is predictably very buggy and prone to crashing right now). As such, here’s hoping that remedial action will arrive for this sooner rather than later.

Unfortunately, Circuit Breakers stumbles aren’t limited to the omission of online multiplayer functionality. Level design is disappointingly threadbare and would have benefited from a number of hazards and additional features to keep things lively and varied, especially as the room layouts themselves are recycled often and remain generally unflattering when juxtaposed against Circuit Breakers otherwise lively 16-bit aesthetic. 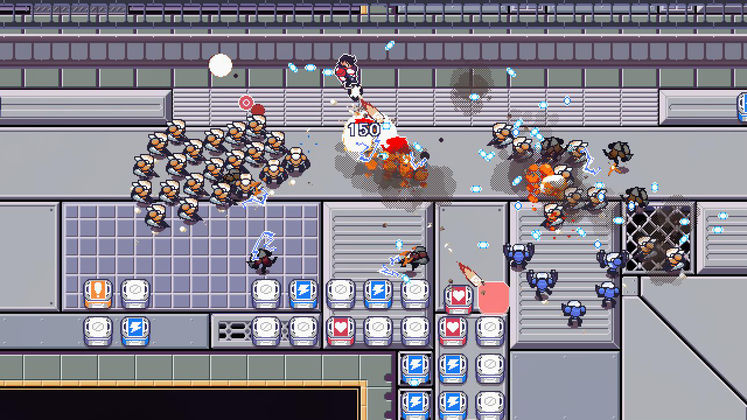 Destroying health-stuffed crates, thus exposing their pick-ups within can save you a lot of grief later on

Elsewhere, Circuit Breakers also suffers from a lack of transparency in regards to a number of its game elements. While twin-stick shooters should, almost by virtue of their inferred simplicity, require little explaining, the additional wrinkles that the developer has wrought into Circuit Breakers require detailing and this is something that just doesn’t happen. Whether it’s the weapon powering up system, or the initially mysterious core system that allows you to customise your robot-shredding heroes, none of it is explained and so the user has to use their own powers of deduction in order to ascertain how these somewhat opaque systems function. Indeed, this becomes particularly baffling when viewed in light of the strides towards the pick up and play mentality that the game makes everywhere else.

While the 16-bit retro audiovisual presentation duly impresses, a small collection of bugs soon become an erstwhile source of frustration. Take for example this situation; after clearing Room Ten in arcade mode with Samson and then laying waste to the shuffling wall of cannons and brick that posed as a boss, the game didn’t acknowledge that I had completed this challenge, as stipulated in challenge mode, even though I had. Clearly then, Circuit Breakers could do with more polish.

Still, a handful of flaws aside and in light of its highly modest price tag, Circuit Breakers still reliably offers a lot of entertainment. It’s clearly not perfect, but in a world increasingly dominated by time-consuming, social-life ruining games, it can sometimes be a lot of fun to hop back in time with a tight, ultra-responsive twin-stick shooter whose humble charms magnify in the presence of friends.

Shooting a rocket into an explosive crate which then ricochets into a group of robots, blasting them to pieces. 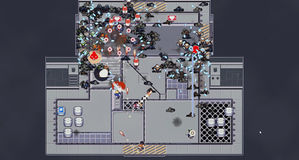