Commander: Conquest of the Americas

Commander: Conquest of the Americas Review

From India to the Americas, Strategy Informer goes in depth with Paradox's latest trading simulator. Can you conquer the Americas?

The true test of any studio's worth comes from the way they treat their fans, their community. Do they tolerate them? Ignore them? Include them in a limited fashion? Open up the floor to them? Look back through the history of games and gaming and you will see varied and differing attitudes on the subject, between developers, genres and even platforms. Don't get me wrong - every developer in some way cares about their fans, appreciates their support, and hopes they never leave. I feel the same way about my mum - but that doesn't mean I want her telling me how to run my life.


Nitro games however is more than open to new ideas - their previous game, East India Company, tried to provide a deep and in-depth trading simulator set against the back-drop of the colonisation of India and the rise of the East India Companies. It wasn't perfect, but it was a nice concept and could be quite addictive and satisfying, without requiring you to think too hard. But Nitro knew their creation could have been better, but instead of pushing on forward doing what they thought the solution was, they opened it up the fans.

Through hard work, extensive player feedback, and the culmination of un-realised hopes and dreams for East India Company, Nitro have developed another maritime trading game in the form of Commander: Conquest of the Americas. Instead of India, the game world is set in 16th Century America, before the first real wave of colonisation began. As the player, you once again take the reins of one of the seven major European powers, and armed with only a small fleet and some smelly peasants, you set out to bring civilisation to the New World.

It's easy to make comparisons with Sid Meier's Colonization game, both original and the remake he did for Civ IV. Not to say that there wasn't an influence - there probably was, but just as East India Company was inexplicably linked to Empire: Total War, the linking of this game to Colonization seems a bit obvious, not to mention unnecessary. If you're looking for any game to compare it too, compare it to its predecessor East India Company. Whilst not a direct sequel, Nitro have freely admitted it's the spiritual successor, and even includes some features that they had hoped to include in EIC, but never did.

In many ways, little has changed since East India Company, and whilst it's tempting to think of that as a bad thing, one has to remember that this is part of the same concept as EIC, if not the same series. How has the game play changed between Starcraft and Starcraft 2? Hearts of Iron II to Hearts of Iron III? Granted, those games have taken larger leaps and made greater innovations than this game seems to have - but that doesn't mean it's not any good.

When approaching the development of Commander, Nitro set out to do a number of key things - streamline the interface, improve the trading system's various mechanics, and add longevity and depth, especially towards the endgame. In the one sense, they've succeeded in every one of those key areas, but in another, it may still not be quite enough.


Commander differs from EIC in several key areas. For one, there are no fixed 'ports' any more for you to conquer and manage. Instead, there are 'colony spots' - randomised locations spread out along the American east cost as well as South America. This already adds longevity to the game, as you will never start a campaign the same way (unless you choose to, of course), and each time you load a new session the colony spots are randomly generated, as well as the resources attached to them. There are only a finite number of spots however, which is designed to promote competition towards the middle and end parts of the game.

Every faction founds one colony to start with, and then after that it's pretty much a race to see who can develop fastest, expand quickest, earn the most profit etc. The early game is mainly about setting yourself up and earning some money, and here is where the improved trade mechanics come into play. Resources now have more depth to them - most (although strangely not all) of the base resources can be upgraded into a more valuable form. Auto-trading has also been vastly improved and streamlined so that it actually works, and even the basics have been streamlined out. For example, if you owned several resources in EIC, you wouldn't be able to trade with all of them all the time because they would eventually get devalued. In this game however it's less of an issue, and so there's one less thing for you to worry about - although it's never a good idea just to have one resource.

Colony management is similar to port management, but the interface has been streamlined and that extra 'mode' of gameplay from EIC has been stripped out altogether. There'smore buildings to build, whether it be garrisons, forts, theatres or production buildings (there's even a palace) but they all have a purpose. Morale is a key factor in colonies now - without it, your goods won't be harvested or constructed as fast, and new colonists from Europe will be few and far between, hampering your growth.

There's still no land-combat in the game, although since this is the Americas it is less noticeable. Naval combat, as always, is the name of the game. Little has changed in that regard either, apart from the standard tweaking and simplifying of the interface. There are some subtle changes that can take some getting used to, but other than that it's still as good as it was in East India Company. There are plenty of other little additions and elements that have been added to the game, but we wouldn't want to spoil it  would we?


COMMANDER: CONQUEST OF THE AMERICAS VERDICT

Commander is definitely an improvement over East India Company - it took onboard as much feedback as it could, made improvements where it counted most, and even the change of setting means that the necessary abstractions it’s had to make are less noticeable. That said, there’s still that slight nagging sense of repetition, that slow down where all you can do is wait and maybe fiddle for a little. It’s not necessarily the game’s fault, it’s just what it is. This is a must have for both fans and newcomers a like, but don’t expect the second coming. This is a solid and improved version of East India Company, nothing more.

Strategically placing your colonies so you can strangle enemy supply lines is always very rewarding.

Commander: Conquest of the Americas Essentials 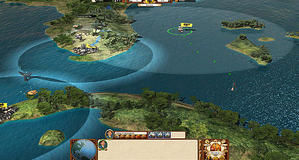