Trick or treat, smell my feet, give us a better battle system to eat

The original Costume Quest is one of my favourite Double Fine games, just after Psychonauts. You just have to describe it to get me interested: Double Fine, the makers of quirky well-written games with great characters, doing a Halloween trick-or-treating RPG inspired by Earthbound. Frankly that sounds like my ultimate game, so why is it still slightly obscure? It was only a short downloadable title, the story was very simple, and the gameplay got a little tedious by the end. There was a cliffhanger in the Grubbins On Ice DLC that seemed like it would never be resolved, so I was very relieved and happy when Costume Quest 2 got announced. If it can fix the flaws with the first game it could be another gold star to Double Fine’s yearbook.

First I want to say that if you haven’t played Costume Quest and DLC pack Grubbins On Ice (which is free with the PC version of the game) do so before playing Costume Quest 2. Rather frustratingly the new game starts straight after the cliffhanger and there is no recap or explanation whatsoever. So let me do so. In the first game you set out to save your sibling (you could play as either sister Wren or brother Reynold) and Halloween itself from the witch Dorsilla and the goblin-like candy-loving Repugnians. Grubbins On Ice ended with the siblings and their two friends Everett and Lucy stuck in a time vortex. Costume Quest 2 starts with them finding their way back to the closest Halloween, and are caught up in time-travel shenanigans as an evil dentist wants to conquer the world and rid it of Trick-Or-Treating. This will not stand, even if it means Wren and Reynold travelling through time to get it. 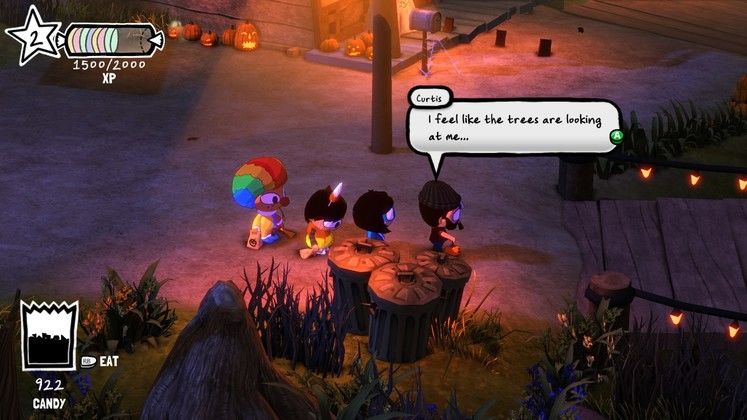 The story is much better this time around, with a few neat twists along the way. Costume Quest had great characters and dialogue but the plot was kept quite simple, but it’s certainly more fun now even if you do need to know the world from the first game to truly get it. Writing remains Double Fine’s biggest feather in their cap as the dialogue in Costume Quest 2 is just wonderful, it’s certainly the main reason you’d want to play it. You’ll want to talk to everyone just to find the weird and wonderful lines they come out with. I especially loved looking out for the nods to other Double Fine games. There’s even a kid dressed up like Manny from Grim Fandango.

Quests have also been given a brush-up, with many more things to occupy your attention and even several hidden ones that you have to use specific costume powers (Thomas Jefferson’s “Diplomatic” power and the Wizard’s blacklight staff for example) to solve. One favourite of mine involved following strange scratches and paw marks around the future before confronting the strange beast that made them. There are hidden costumes, “Creepy Treat” cards (more on them shortly) and even kids playing hide-and-seek to find. There’s even a few adventure game-style puzzles, some of which require crossing time periods in a way that reminded me of Tim Schafer’s classic Day of the Tentacle. While definitely a short game (it took me 6 hours to beat, and I did a lot of the side stuff) you’ll still want to do everything in it because it’s so much fun to explore. 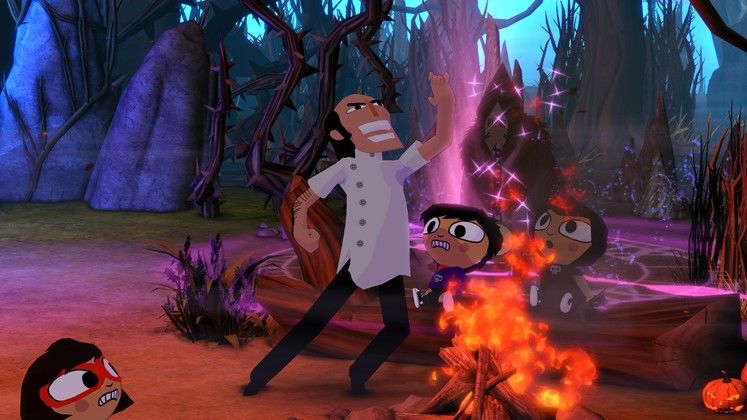 Orel White. What a megalomaniacal party-pooper

Which is mostly down to the world of Auburn Pines being so fun. It’s like a Charlie Brown cartoon, all colourful and friendly, and now there’s the twist that you have three different time periods to play about in. The past, which is New Orleans Bayou-style swampland filled with (friendly) alligators and jazz musicians. Present, which you actually spend the least time in. And finally Dystopian Future where megalomaniac dentist Orel White has conquered the world and made candy and costumes illegal, and an oppressive unfriendly city is squeezing the life out of friendly little Auburn Pines (SATIRE!). Much like Earthbound though no matter how grim things can seem Costume Quest 2 still remains colourful, sweet, and lovely all the way through. More games like this please.

There is a big “but” coming unfortunately. I’ve been very positive about Costume Quest 2 so far but I haven’t talked about the biggest part of the game, and unfortunately it drags my love for the game down. It’s the battles. I don’t know why Western developers can’t get JRPG-style turn-based battles right, but despite some tweaks Double Fine still haven’t. While the conceit that the kids become “real” versions of their costumes to fight monsters is still cool, the actual fighting got tedious towards the end of Costume Quest and has barely changed here. You press a button to attack, press the same button again to make it harder, press the same button to block an attack, and can occasionally use a special ability which you have no input in at all. Compare the battles of Costume Quest to Nintendo’s Mario & Luigi or even basic stuff like Chrono Trigger or classic Final Fantasy titles and it comes up short immediately. 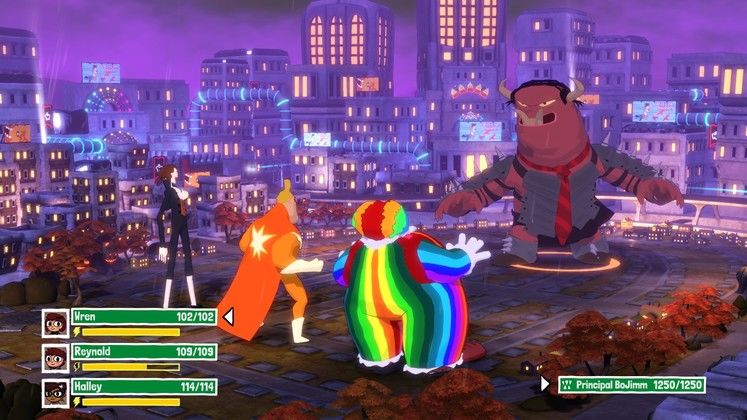 Live the dream - beat up your Principal. And yes, of course he's a monster

The tedium of battles is especially present at the start of the game, where you don’t have upgraded powers and one of your party is forced into a useless Candy Corn costume - for comical effect, which soon lost its appeal. The fact that Trick-Or-Treating plays such a major role in the game means that every knock on a door is a potential battle, so a row of houses with the lights on actually creates depression rather than the intended elation. Things improve at least as you pick up better abilities, costumes, and Creepy Treat cards that you can deal in battles to do things like activate various debuffs, heal, make enemies hurt themselves instead of your party, and even immediately kill off minions. The battles though never really get enjoyable, as enemies all kind of play the same. It doesn’t even matter if they set you on fire since there’s nothing you can do about it.

It’s part of really the big problem Costume Quest 2 has in general, which is that it hasn’t really improved from the last game. There are tweaks such as the ability to “sprint” with roller-shoes at all times (instead of previously just with the Robot costume) and some slight improvements to the battle system like the later ability to counter attacks, but it all still feels, looks, and plays the same. It’s still stupidly got a loading screen before the short “get candy” animation, and another after. It even hangs on the ‘Load Game’ screen.

All Costume Quest needed was a more interesting battle system, better quests and a longer more involving story to be a great game. Costume Quest 2 has better quests and a more interesting story, and a better designed world. It’s still got the excellent writing, sound, and music that’ll keep most people happy, but it was the battle system that needed an overhaul most and it hasn’t had it. Consequently fights are painfully tedious at the start and only get slightly more interesting over the entire game, which as a result stops Costume Quest 2 from being that great must-play game it should be. If you enjoyed Costume Quest and want more but don’t mind if it’s not too much improved then Costume Quest 2 is a must play. Everyone else: play the first one then make up your minds. I personally enjoyed everything but the battles, which I gritted my teeth through, and the wonderful world of Auburn Pines kept me personally happy for the six hours it took to complete. And after playing Alien Isolation and The Evil Within I needed a happier Halloween game.

Using the Thomas Jefferson costume’s “Diplomacy” power to argue your way past stubborn people. Because that’s how diplomacy works, kids! 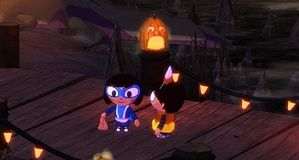