With his otherworldly perception, keen intellect, smug charisma and intriguing idiosyncrasies, it’s fair to say that the appeal of playing as Sherlock Holmes, the world’s greatest fictional detective, is a compelling one. Happily then, Buoyed by years of experience in crafting games that focus on the exploits of the legendary detective, Crimes and Punishments resolutely stands as the most accomplished and polished take on the Baker Street sleuth that developer Frogwares has created so far. Minor niggles aside, Crimes and Punishments captures the thrill and excitement of playing Baker Street’s finest better than any other game on the market.

Supported by the ageing, yet still capable Unreal Engine 3, the Ukrainian outfit's latest jaunt into the pages of Sir Arthur Conan Doyle’s detective fiction is visually formidable. Holmes’ iconic Baker Street abode is rendered in vivid detail, with posh embroidered tablecloths set atop ornate antique furniture while sprawling bookshelves stuffed with dusty tomes line the walls and rain-streaked windows provide a semi-distorted glimpse into the lives of fellow Baker Street denizens. It's a level of detail which is replicated throughout the game too, with train stations, opium dens and more all realised in equally loving amounts of detail.


Character models look better than they ever have in previous games too, with pockmarked faces, stressed eyes and tiny scars being just a selection of the anatomical detail being brought to the forefront with astounding clarity. Aside from some occasionally repetitive dialogue and odd lip-synch at times, this is a very polished game indeed.

Simply, Crimes and Punishments presentation stands as a quantum leap beyond what Frogwares has achieved before.

After a chuckle-worthy introduction that brilliantly showcases Sherlock’s eccentric nature (and Watson’s seemingly eternal sufferance of it), the game begins in earnest with the charismatic sleuth taking on the first case at his Baker Street address.

Adopting a third-person view that can be toggled with a first-person perspective for a more intimate experience, Sherlock’s first route into most of these cases is to visit the scene of the crime and start his investigation from there. Navigating your way around the various locations can feel a little clunky at first; the detective’s response to your actions feeling a touch sluggish, yet over time such teething pains become less of an issue as the investigations ensnare your attention and events start kicking off properly.

From murders and assaults to spectacular thefts and frame-jobs, players are required to combine their own wits with Sherlock’s expansive tool-set of investigative methods to get to the truth across the game’s six cases. Each case never feels small in scale as they whisk you from Baker Street to Whitechapel, Scotland Yard and everywhere in between with a whole host of characters, clues and other details to be noted in each location.

These aren't throwaway mysteries that can be solved in an hour.

Good old fashioned interrogation is perhaps the most direct way to make headway in a case. Instead of a selection of different questions that preclude one another, Sherlock gets to choose from a list of questions which are pertinent to the case, with each one shedding a little more light on the circumstances and motivations of a particular suspect. Beyond such probing queries however, lurks a more clandestine form of interrogation as the action can be paused, allowing Sherlock to freeze time as he takes notice of the personal details of his quarry.

With time stopped, Sherlock can pick out incidental details of a suspect that might betray them in the clothes that they wear, items they carry or points of interest on their person in general. As well as evoking that brilliantly familiar flourish seen in the recent Sherlock and Elementary television shows, such additional perception also brings with it extra choices that can be used to support further avenues of questioning. A suspect saying that they weren't at a garden, for instance, but yet have mud and dirt crammed in under their fingernails is clearly spewing fallacy and as such, can be called out on it promptly.

Elsewhere, Sherlock is able to notice details that others cannot in the environment as well. The dust outline of where a box used to exist on a shelf, light footprints in newly disturbed ground or a small piece of paper stuck in between rickety floorboards are all examples of his almost superhuman levels of perception at work.


Conversely, some cases require Sherlock to be in disguise to subvert some suspects in order to gain valuable clues and insight in a case. A veritable array of costumes, toupees, stick-on facial hair and more awaits as pretending to be a completely different individual proves to be quite an entertaining prospect and provides further variety to the investigative methodologies on offer.

Simply, Sherlock isn't like other detectives and that's what's given him such an endurable allure all these years. He can see things, interpret events and pick up on details of such nuance that us regular mortals cannot and it's these abilities that Crimes and Punishments captures so well; making the player feel like Sherlock and doing so with remarkable style.

As much as the game likes to embellish the more fantastical qualities of Holmes' detective work though, Crimes and Punishments also provides ample amounts of more down to earth sleuthing activities as well.

Each case will require Sherlock to consult his archives, refer to old newspapers, pick locks, undertake chemical based forensics, concoct experiments to replicate an event and even use his sense of smell to identify clues which pertain to an investigation. In most cases, these activities are accomplished through a mixed bag of mini-games which encompass everything from sticking a pig with a spear, to arm-wrestling, sniffing cigars and mixing chemicals to create an ink-erasing solution.

For the most part, these mini-games bring a welcome change of pace to the proceedings, but sometimes, they can border on the frustrating (the measuring of disturbed mud in the second case being one such example). Luckily, the option to skip these activities is available and stands as a much welcome concession for those would-be detectives who have little interest in such distractions.

If all this clue collecting, motive unravelling and dialogue sounds a little overwrought and difficult to keep track of, then it comes as some relief that the developer has made great strides to make everything easily traceable. When an area has been fully searched it'll be coloured in a green hue, while areas that still have clues to give up will be white. Furthermore, an on-going casebook helpfully collates everything of note to date; a useful tool if one returns to the game after a period away given the non-linear approach to each case that the game encourages. As befits the work ethic of any great detective, Crimes and Punishments asks that players consider all the evidence and motivations of those involved, before proceeding with a prime suspect and this is where the deduction view comes in. A visual representation of motives and evidence with tendrils that stretch out in various directions depending on the nature of the latter and the former, the deduction view fills up with more interconnecting strands as and when the player makes a link between a pair of motives or evidence based statements.

It’s a testament to the quality of the game’s writing the characters contained within it are often hard to get definitive impression of; something that plays directly into the game’s investigations and makes the process of effective deduction that much more challenging.

While the game does let the player know as to where they should go and what task they should be doing, the actual act of deduction and comparing evidence is very much left up to the player as is the order in which these tasks and locations can be tackled. As such, it becomes easy to miss out on a piece of evidence, a conversation point or even the smallest clue which might otherwise drive the investigation in a totally different direction. There is a proper, tangible thrill then to making a breakthrough in a case and it’s that thrill which both satisfies and provides the impetus to press on.


Once the deduction process has concluded, evidence and motives can either substantiate accusations of guilt or prove the innocence of each of the five potential suspects that each case offers up. Crimes and Punishments gives players sufficient latitude to even free the guilty or persecute the innocence and with multiple endings to each case and the ability to absolve or condemn those that you find guilty, Crimes and Punishments potential for repeat play is clearly considerable indeed.

Sherlock Holmes: Crimes and Punishments is more than just an excellent detective adventure, it also absolutely nails the essence of being the pride of Baker Street and in doing so provides an exciting roadmap for where Ukrainian developer Frogwares will take the series next.

Profiling a suspect from tip to toe mid-conversation and then using those details to prove your allegations in brilliantly smug Sherlock fashion. 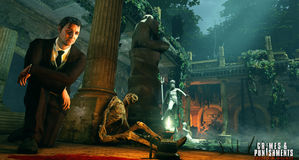