The best way to introduce Cthulhu Saves The World is for me to step aside and allow it to introduce itself. After lurking silently in Earth’s oceans since before the dawn of human civilisation, H.P. Lovecraft’s most famous creation rises from the ancient, oceanic city of R’lyeh with the intention of destroying the world. However, at the last moment a wizard appears from nowhere, strips Cthulhu of all his powers and casts his now puny form on a desolate shoreline.

The only way Cthulhu can regain his former glory and destroy the world is to become a true hero and save it first. So begins a unique and enthralling RPG that punches so far above its weight there are other RPGs which haven’t been conceived yet that are currently massaging their future-jaws.


Having already been lingering around Xbox LIVE for eighteen months, I had pre-emptively formed a few expectations of Zeyboyd’s bizarre game, such as its abundant humour. It certainly is funny, but what I didn’t expect was the sheer amount of Lovecraftian lore that the developers have so deftly weaved into the game.

This is by no means a run-of-the-mill JRPG with Cthulhu plonked in as the main character. I’ve read a fair amount of Lovecraft and Cthulhu Saves The World oozes with references to the horror master’s work. Cities such as Dunwitch and Lovecraft’s hometown Providence feature extensively in the game, and major characters like Nyarlathotep act as boss enemies. Best of all, one of your party members is a Cat of Ulthar called Paws.

Of course, this is a distorted, parody version of the Cthulhu mythos (more distorted than usual, in any case). Nyarlathotep believes he is more powerful than Cthulhu because he has a longer name, and fearsome extraterrestrial Paws is extremely sensitive about his adorable feline appearance. What is particularly pleasing is that beneath the exuberant, light-hearted humour is a cast of genuinely interesting and likeable characters.

Cthulhu’s dilemma of saving the world in order to destroy it really shines through in his character. The further he goes in his quest, the more he begins to believe his own role as a hero. At the same time, however, he is persistently adamant about his former role as a harbinger of the apocalypse.

The result is that a squat cluster of sprites representing a bat-octopus-monster-god-thing is more human and relatable than the majority of videogame characters. Cthulhu’s humanity is further brought out by his initial companion Umi, whose fluffy anime cuteness and boundless warmth makes the perfect foil for Cthulhu’s innate malevolence.

It isn’t just Lovecraft’s work that is ripe for mockery here. This being an RPG, the conventions of the genre are also very much in the satirical firing line. Early in the game, Cthulhu encounters the Heroes of Goodly Justice. After defeating them, Cthulhu remarks that “they’re heroes. They’ve probably already respawned in the nearest Church.” Another early quest involves Cthulhu rescuing a dog. The fallen god glumly accepts, commenting that “I guess it’s the sort of thing a hero would do.”


However, such snickering at RPG conventions would seem hypocritical if the game was no fun to play, and unlike a certain other game released recently, Cthulhu Saves The World backs up its jokes and jibes by being a competent game in its own right. Combat particularly surprised me with both its depth and capacity to entertain.

It’s a turn-based Final Fantasy affair, and each part member has their own raft of standard attacks, special techniques and magic. What makes it interesting is that although health regenerates fully at the end of a fight, mana is only replenished by a small amount, which varies depending on how long it took you to complete the fight. This makes combat a delicate balancing act between finishing a fight as quickly as possible and not expelling too much mana in order to do so.

This system is not entirely without its problems. In the first few hours I found my mana points to be depleting fairly quickly, with little opportunity to replenish them. Once I’d filled out my party the system balanced itself out, and I found a nice rhythm where I could win most battles in a couple of turns.

In addition, levelling and looting are implemented simply but effectively. Levelling up a character involves a straightforward binary choice. This can be between a pair of differing stat upgrades or a choice between two new abilities. Yet because each level has its own branch, characters can diversify enormously within a few levels. Loot is also boiled down to weapon and armour upgrades, potions and 1-ups, all of which are spread through the world in little red and gold chests. The chests are almost perfectly spaced out, neither occurring in abundance nor being so sparse that the game becomes dull. Yet while they’re easy to find, they can often be a pain to get to.

This is where another problem rears its head. The level design is exceptionally mazy, too much so for my taste. Navigating Dunwitch’s corridors of zombies was particularly painful and felt more arbitrary than the joke at the end of this sentence. The game even begins to make sarcastic comments about its own backtracking after a while, which sadly doesn’t make it any more fun. Also it uses a random battle system, which combined with the labyrinthine levels can sometimes make progression feel sluggish and stuttering.

Fortunately, after a set number of fights in a particular area, the game stops throwing random encounters at you (although you can opt to do more in the menu if you’re so masochistically inclined) and the misjudged backtracking jokes are a rare example of the humour falling flat. In fairness, the world is absolutely crammed with gags. Every enemy you face comes with a witty one-liner description. The tentacle, for example is “yet to have its day” , whereas the Witch Doctor apparently “accepts most insurance plans”. The number of unique monsters is staggering. Each new area has its own unique and twisted cast of Cthulhu-fodder, and consequently a bucketful of new jokes.


In fact, the humour is often the driving force of the game. Each individual bookcase and chest of drawers provides a completely unique joke or snippet of humour. Many are mock book titles such as “Pop Goes The Hamster: A Cautionary Tale” while others make references to gaming clichés like “You try pulling out various books, but no secret passage appears.” They’re often a bigger incentive to move forward than the promise of a new item or ability. The player becomes a looter of laughs, a prospector of puns. They also serve to make this weird, wonderful world richer, and further intertwines the acts of telling a story and playing a game.

One final item of note is the price. Cthulhu Saves the World is only purchasable in a double-pack with Zeboyd’s other RPG Breath of Death VII. The price of this pack on Steam is £1.99. Hence this sprawling, deep, funny and frequently touching RPG essentially costs less than a pound. Often it is complained that games are overpriced, but Cthulhu Saves The World is significantly under priced. Regardless of cost, this is a quality game, but at that absurdly low price there’s really no excuse to deny yourself of it.

One final item of note is the price. Cthulhu Saves the World is only purchasable in a double-pack with Zeboyd’s other RPG Breath of Death VII. The price of this pack on Steam is £1.99. Hence this sprawling, deep, funny and frequently touching RPG essentially costs less than a pound. Often it is complained that games are overpriced, but Cthulhu Saves The World is significantly under priced. Regardless of cost, this is a quality game, but at that absurdly low price there’s really no excuse to deny yourself of it.

Arriving in a new town, because you know there are dozens of jokes just waiting to be unearthed. 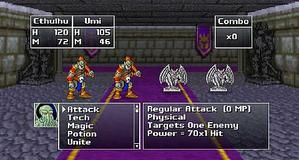