A mixed bag of meh, that was awesome, and shoulda-woulda-couldas

Black-ops and secret mission-based games usually involve a good amount of sneaking around and intelligence gathering, as well as cool gadgets and a variable amount of killing. Digital Extreme’s Dark Sector doesn’t mess with the formula much, but does offer a bit of a different take in the gadgets’ department. The game has undergone a big transformation from what was seen in its debut trailer from a couple of years back, with the final project more terrestrial than its space-based original concept. What we’re left with is a fairly safe game with a lot of shine, and a possible franchise that has more potential than what has been conceived for this first effort.

Like Snake infiltrating Zanzibar, or Sam Fisher sneaking into some foreign enemy base, Dark Sector’s Hayden Tenno stealthily makes his way unto the shores of the fictitious, ex-Soviet, Eastern Bloc country of Lasria. Tenno’s past is a mysterious one, with some amount of conflict, and he is charged with the task of bringing down his former mentor who has gone rogue after being sent into the country years earlier to follow-through on a secret government mission. Before he has a chance to complete his mission, Tenno is infected with a disease that has given him the ability to perform superhuman abilities.


The game’s story doesn’t deviate from the oft-familiar theme of other games, as the main character struggles with a troubled past while executing a mission in a hostile environment. Here, Lasria was a once utopian-like city that has been ravaged by the same infection that Tenno now hosts; for the operative, he fights against both the ravenous infected, and the Russian army sent in to ‘clean up’ the mess (i.e. kill all of the infected).

Unfortunately, the story falls flat through its execution. Save for the comic book (sold separately), which offers an unmeaningful backstory, there’s little explanation of the virus and even less character development. There are a few cutscenes which try to give some understanding to the characters and mission, but the dialogue is incredibly weak and suffers from poor clichés, voice-acting and overall irrelevant, unexplained information. The story boils down to a game weakly tied together in-order to incorporate fun bits of action.

And that’s exactly what Dark Sector is all about: bits of fun. Once you look past the shoddy narrative and horrible dialogue, there is a fairly fun game in front of you. The experience really isn’t unique, but there are bright moments.

While the level design is somewhat repetitive and dark, the entire game looks gorgeous. There’s a shine throughout the game that makes the environments compelling with a fluid ocean and empty streets when you’re outside, and, while underground or in buildings, surroundings are convincingly dingy and desolate.

On par with the environment visuals are the character models and objects as well. While Hayden may be the least convincing hero, with a fishbowl head and emo hairdo, his motions and look, along with all of the other characters and weapons, look great with stubble, reflective hazmat suits, respirators and barrel carvings. Also, depending on what kind of weapons you have equipped, cutscenes will incorporate them accordingly (minus the occasional two-handed chain gun).

The main draw to the game is the Glaive: Hayden’s organic, tri-blade Frisbee. Spawned from his infection and ever-returning, Hayden has the ability to dismember enemies by throwing the weapon. Although he acquires additional abilities in the later stages of the game (invisibility and a shield), the weapon is the focus of gameplay, and while it works well, there are missed opportunities in it’s implementation that make it less convincing: enemies aren’t always hurt in its return path; it will fly through objects in its return; it takes a couple of passes to kill weak enemies; and there’s no ability to ricochet the weapon for a kill. While it’s exciting to see developers actually integrate area-specific body damage into gameplay, the weapon itself ultimately feels less powerful and useful than it should be.

What the Glaive does do, however, is make for some interesting boss battles that require a bit of wit and some aim. Instead of simply attacking enemies, battles entail using the death-disc in a specific manner to weaken the boss and then take them down. These encounters are well done and are a highlight when juxtaposed against grinding sections with an onslaught of otherwise dimwitted enemies. Unfortunately, for a game that incorporates exciting boss battles, the general AI is fairly simplistic and rather boring.

Aside from looking great and implementing some fun gameplay elements, the game suffers from a few technical problems and a poor amount of variance throughout. While too many enemies on screen will cause the game to chug at times, animation glitches with characters skating around the ground and uninterruptible reloads detract from the total immersion. Also, there will be times when characters will tear through objects from Finishing animations (visceral, melee moves), or ammunition itself will pass through walls and doors that will either kill you or your enemies.

Along with technical problems is the lack of variability and customizability. The game is completely linear, progressing straight from one stage to the next. While only one or two sections of backtracking is a nice change, there’s not much incentive to replay the story once it’s all said and done since it will be the same experience the second time through.

Continuing to kill replayability is the inability to buy and customize upgradeable weaponry. Through a black-market system, accessed via manhole, you have the opportunity to buy new weapons and augment them with upgrades found during your mission. However, money is scarce, so applying those upgrades and accumulating an array of weaponry is impossible, especially when your inventory doesn’t transfer from a previous game to a new one.

Finally, while there is a multiplayer mode, it too suffers from a lack of variance. In both the single-player game, and online, there are only a few different, generic models for all sides involved in the conflict. While the infected look like a metallic knockoff of Halo’s Flood in story play, both the Lasrian army and Agency operatives only have a single model for both shotgun and machinegun-type characters; even Hayden himself comes in two different models.


These characters are automatically switched out for the player between deaths when playing in the game’s two online modes, amongst a handful of mirrored arenas. Whether it’s all-on-one in Infection, or the team-based Epidemic with Haydens on each side, both 10-player games suffer from inaccurate, weak weaponry and lag. While it’s exciting to be the Hayden character, complete with Glaive and full abilities (including invisibility), games turn into short matches with frustrating Finishes being employed from a cloaked enemy. However, with only two different characters (three including Hayden), two game types, a handful of maps, and fair amount of lag, online matches can be exciting—it’s just usually when you’re the Hayden character and there’s only four people playing.

Overall, Dark Sector is a passable first try. For a new action title, it has the potential to pick up a franchise. There are many subtleties to the game which make it an immersive experience; be it the exclusion of any HUD in a 3rd person perspective and a great graphical prowess, or markers on your character’s arm telling you when your powers are available for use. However, the lack of depth in both story and gameplay elements make for a game that won’t last long in your disk drive, but it remains one that is certainly worth a play-through.

Slicing an enemy’s torso in half and having the top part fly by me on the Glaive’s return-path: gruesomely awesome. 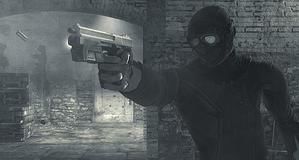