When Darksiders first released in 2010, its blend of Zelda-style exploration and violent, over-the-top character action proved to be a winning combination. Its 2012 sequel expanded the combat system and built the whole thing around a cycle of loot and equipment upgrades. While it wasn’t quite the–ahem–”revelation” that the first game was, it stepped back from the original’s apocalyptic storytelling to smartly expand on the series’ core combat.

You might remember that Darksiders was a THQ franchise, and that THQ no longer exists. A Swedish publisher called Nordic Games picked up the rights to many THQ games, and now they’ve chosen to release Darksiders II: Deathinitive Edition, a remaster of the 2012 original, for PCs and modern consoles.

The sequel casts you as Death, one of the Four Horsemen, as you try to rescue War, the original game’s protagonist, from the heavy charges of unleashing the apocalypse and destroying humanity. Darksiders II is much less bombastic than the original, and its events feel more like a side story than a true sequel. The game’s failure to deliver on the original’s terrific, exciting cliffhanger is just as disappointing today as it was years ago, and while the story still has some interesting characters and cool moments, it ultimately feels inconsequential to the series as a whole. 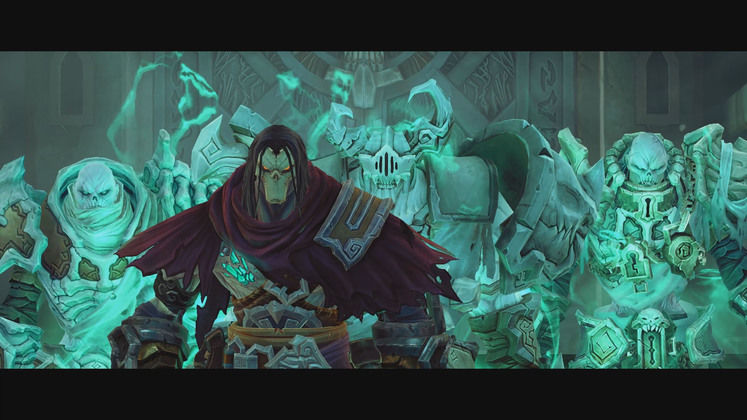 Death is on a quest to save lives. Wait, what?

But while the story may be disappointing, the combat is incredibly satisfying. There’s real weight to Death’s moves, but they still feel fast and fluid. You can cancel out of nearly any attack into a quick evade move, and you can effortlessly chain combos between your basic attacks, secondary weapons, and sub-abilities. The combat’s made even more exciting by the constant promise of better weapons and more loot. The economy fell out-of-balance about halfway through the game for me, leaving me with far more gold than I could possibly use, but the constant drip of new gear with new abilities still made every treasure chest exciting. “Oh man, you mean this axe has health steal? Sweet!”

The exploration and puzzle-solving are also mostly excellent. There’s a solid progression of difficulty throughout the game, and you never stop getting new abilities and finding new types of puzzles and problems to solve. The final ability unlocks only a few hours from the end of the game, in fact.

Darksiders II is also a fairly lengthy adventure, perhaps a bit longer than it needs to be. If you forgo most of the side content, you might finish it in as little as 15 hours, but you’ll more reasonably find it in to 20-30 hour range. With the game’s general reduction of storytelling, parts of that time can feel a little monotonous–segments of the game sometimes simply go on longer than they need to. A series of three dungeons in the middle of the game has you solving the same types of puzzles in the same types of environments to accomplish the same overall story goal, and this and a few other moments can feel a bit tedious.

Despite the lackluster storytelling, the game does a great job of setting tone and atmosphere thanks to its terrific art design. It’s a comic book take on Western mythology, with muscular paladin angels and hulking demons stroking their nefarious tusk-beards. You’ll find yourself in forests, mines, the underworld, and even heaven and hell, and each location has its own unique look and flavor. Certain boss fights also provide a great sense of scale and danger. 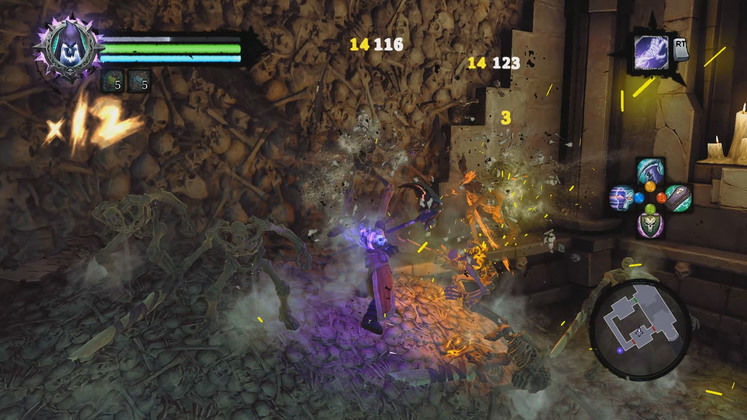 Combat moves fast and has a ton of impact

So Darksiders II is pretty good. But is this actually the “Deathinitive” version of the game? The game boasts improved visuals over its original release, but the Steam store’s note that it’s “running in native 1080p resolution” is not exactly a breathtaking feature on PC. There are other visual improvements, though. Textures are at a higher resolution, and this is a noticeable improvement over the sometimes blurry original.

The supposedly improved lighting and shadows are a bit more of a mixed result. There are definitely moments when both look really cool and add to the atmosphere, but there are tons of little issues throughout. Shadows on characters often look like a pixelated mess, and sometimes the light does things that light ought not do. Essentially, there are moments where light sources seem to be attached to the camera rather than the environment, so spinning the camera around will cause the light to spin, leaving a result that looks like a time-lapse photo. These things aren’t deal-breakers, obviously, but they’re pretty disappointing when the update is being sold partly on the merit of visual upgrades.

You might also need to turn those settings down a bit to get the performance you want. The original ran at a solid 60 FPS on my fairly modest PC, but I had to turn down the options just a bit to get the same performance with Deathinitive Edition. Those settings, by the way, consist of only two options–anti-aliasing and shadow quality. If you want to play with a mouse and keyboard, you’ll also probably need to hit the key binding options, because the default controls are full of questionable decisions. The default aim sensitivity especially is a lightning speed nightmare. The PC version was clearly not the priority here. I had a great time with it once I knocked the settings down a bit and plugged a controller in, but it’s definitely lacking many features PC players have come to expect.

I also crashed to desktop a couple of times. Once seemed totally at random, but another was a repeatable crash at the end of a story-critical cutscene that completely blocked my progress. Completing a seemingly random sidequest fixed the bug, for whatever reason. These issues in particular were frustrating, but the developers have been extremely communicative and quick to issue hotfixes and patches. 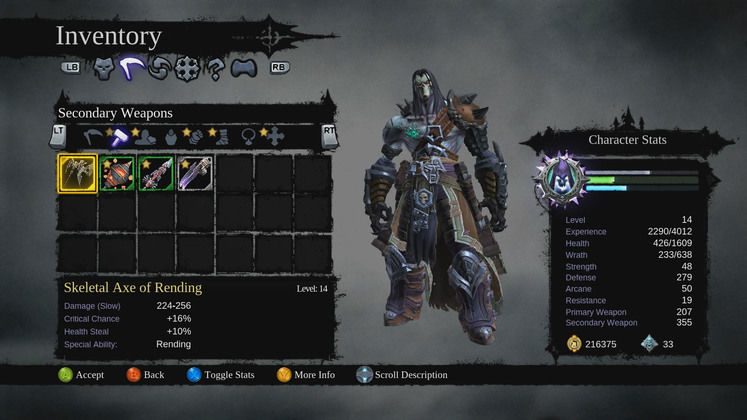 Deathinitive Edition’s gameplay improvements - a rebalanced loot system and a new, harder difficulty - are likely only going to be noticed by the most hardcore of fans. All the previously released DLC is included, though, which is nice, and they can be accessed after reaching certain points in the main story.

GameWatcher first reviewed Darksiders II upon its original release in 2012, and we said then that it was a great game with a mediocre PC port. The same holds true with this enhanced version, but it’s a lot tougher to forgive these issues three years later. I had a great time playing Darksiders II, but there’s nothing definitive–or even Deathinitive–about this edition on PC.

Darksiders II has satisfying combat, a terrific variety of puzzles, and great, consistent art design. It starts to wear out its welcome deep into its lengthy runtime, and its story fails to deliver on the original game’s promises, but it’s still an exciting adventure well worth embarking on. Unfortunately, this edition on PC is full of minor technical issues that prevent it from realizing its full potential. Darksiders II is worth playing, but Deathinitive Edition is not worth the upgrade.

The first boss fight, against a massive creature in a wide-open field. There’s a terrific sense of scale, reminiscent of Shadow of the Colossus. 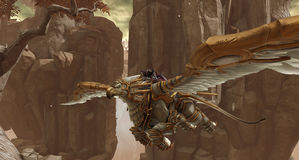