So, my other option was to use a gamepad. That didn’t work because the code for the controller is messed up and the character automatically drifts left, and I would open the menus and then it would slide right all the time. Great, so this isn’t going well is it? Thankfully I had the Steam Controller.

I don’t know why the developers released a build to the press that was faulty. In an email, they say there’s bugs to work out, and I understand that, but give me a good copy or wait until the bugs are out. The ability to change the controls are important. They affect how you experience the game. It’s a red flag that Freshly Squeezed was willing to send us a copy like that. They say the bugs will be out by the time you’re playing this. I hope they are. 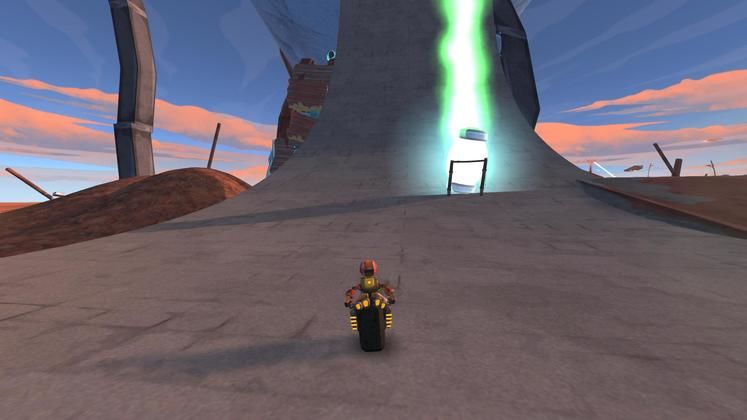 Defunct has a great sense of speed!

Freshly Squeezed calls Defunct an adventure game. I think it’s more accurate to call it an adventure-racing game. When I first turned it on, I didn’t know what to do. I’m rolling along, moving through each level collecting something here and there, but the ultimate goal is get back to your ship you fell out of. You have to roll over hills and valleys, and roll through tunnels and forests; you’re bouncing off of big jump pads and sliding on rails. All to get back to your ship.

You have the ability to control gravity so you can make yourself heavier and you can stick to surfaces, which helps you stay on them. Let’s say you’re on a surface that’s upside down, you can use one of the gravity functions to stick to that surface so you don’t fall off. Or let’s say you want to go downhill faster. You can use the other gravity function that pulls you down and makes you slide down the hill faster, but if you start going uphill it will slow you down a lot.

You’re on the planet Earth but now it’s inhabited by robots of similar kind. You have a body and one wheel, which at first is kind of cute. Freshly Squeezed tries to create an emotional connection between you and the character with animations that aren’t amazing, but convey enough so you can tell what he’s feeling. His engine is always making noises and he’s constantly pounding it to make it work, but after a while, it goes from cute to slightly annoying. You wonder why they gave him a broken engine when he can go at phenomenal speeds. And he has a light on his back indicating when he’s struggling uphill, but there’s no consequence for making the engine work harder. I like that they put in these type of design points but they’re points that ultimately don’t add up to anything.

While you’re rolling through the world, if you don’t want to just go from level to level, then you can take your time and collect things. These gold coin-looking objects don’t have names, but when you collect them, you can unlock different colors and tricks for your robot. 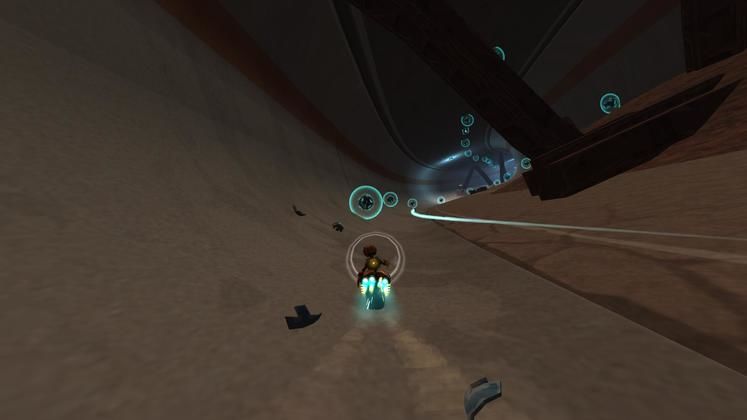 I’m not a fan of that way of time trialing because I like to figure out how to get from point A to point B without having to focus on collecting items. You can take time to figure out the best route to collect the green balls and speed boosts scattered throughout the map. That’s the point, but my preference is to focus only on the level. That’s just my style. If that sounds appealing to you, you’ll definitely enjoy it. 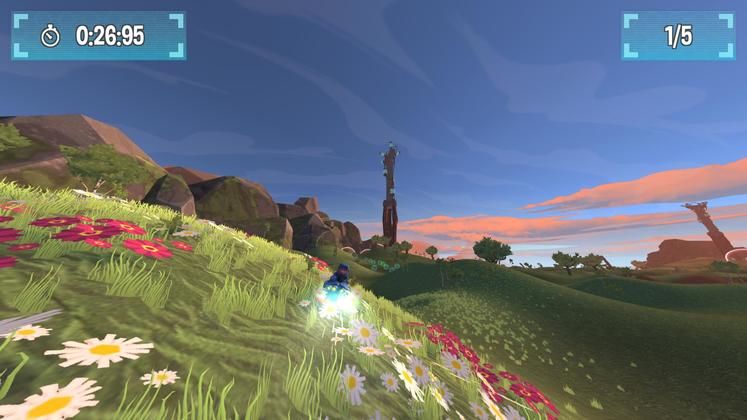 Some worlds are extremely vibrant

I like Defunct. The game lasts a little over an hour if you race through it but including collecting everything and time trials, you can squeeze a good ten hours out of this game. The collectibles are hidden well and the time trials are challenging. There are some design choices that could’ve been scrapped or refined but other than the robot constantly hitting his broken engine, it’s fine. I don’t know how much this game costs by the time you read this, but if you like going really fast, you’ll want to check out this game.

Freshly Squeezed needs to fix the key binding and gamepad situation by the time you read this. I am trusting they will, but consider yourself warned.

UPDATE #1: As of Wednesday, January 27, Freshly Squeezed updated the game and fixed the key binding problem, but now the secondary key bindings can’t be changed. The gamepad controls, however, are not fixed. Everything still works with a Steam Controller. I’m not sure what you may get by the time you read this, so be sure to check back for any updates.

Defunct combines speed and exploration in a package that’s simplistic but engaging. The gravity functions lack a variety of uses but they’re necessary in nearly every situation, and there’s so many ways to engage with the game the way you want. It doesn’t have all of its screws tightened, but what’s there is packed with replay value. 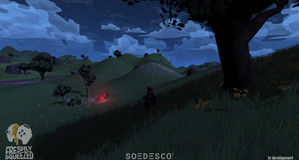