If only we had a less detestable hero

Rufus was a jerk and I didn’t like him. He’s the hero of the Deponia series, though I should maybe put “hero” in quotation marks, given how much of this game’s opening hours he spends being a selfish, antisocial schmuck. He insults homeless kids, constructs an elaborate set of lies to manipulate his girlfriend, and accidentally murders a local with his wanton carelessness.

If only we had a less detestable hero.

He’s meant to bear more than a passing resemblance to Monkey Island protagonist Guybrush Threepwood, but where Guybrush’s messes were the result of naivete and hapless pratfalls, Rufus’ combined idiocy and selfishness takes the comic adventure to some far darker places.

Those dark places start with nuclear winter and the annihilation of an entire planet. At the end of the original Deponia trilogy–spoiler warning–Rufus sacrificed himself to save the world, but the opening of Deponia Doomsday sees both those outcomes somehow reversed. The planet’s surface is an icy, monster-infested ruin, and old man Rufus (voiced by a delightfully-chosen guest actor) seeks out the big red button that will blow it all up once and for all. 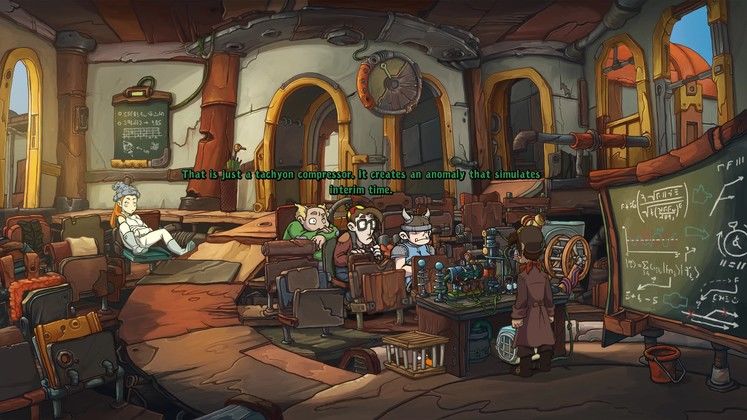 Time travel is such a complicated mess, maaan...

That’s it. The end. Roll credits.

Okay, fine, not the end. There are time travel shenanigans afoot, and Rufus, fresh from a time just before his original adventures, partners up with temporal expert Dr. McChronicle to prevent the apocalypse that our “hero” has apparently set in motion. Or to at least get as far away from it as he possibly can.

Doomsday is, if you’ll pardon the expression, an adventure-game-ass-adventure-game. You’ll pick every object that’s not glued down and use your grasp on the world’s cartoon logic to figure out how to combine those items and use them to progress. (Failing that, you’ll try using everything on everything.) If you’ve played an adventure game before, you know what to expect. That goes double if you’ve played LucasArts adventures and triple if you’ve played the Curse of Monkey Island, from which Deponia takes no small amount of inspiration.

The puzzles are generally well-put-together, with nothing that stands out as particularly devilish. The challenging, but not out of line with old-school adventures. Over the course of the game’s roughly 15 hours of playtime, I only got hung up on three or four puzzles for any significant stretch. Your inventory resets at the start of each of the eight chapters, meaning that your options are limited to more immediately useful options, and you’re not carrying around red herrings (or rubber chickens with pulleys in the middle) for large stretches of the game. A few of those chapters have time travel components that require you to occasionally reset your progress to the chapter’s start once you gather a specific piece of information, but it’s usually clear exactly when the reset is necessary, which keeps the repetition from getting frustrating. 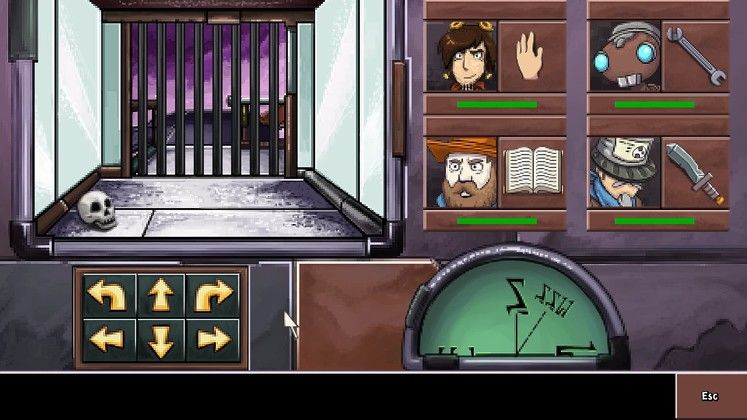 Some occasional minigames break up the action with mostly fun diversions

Solid, old-school puzzle design means that your enjoyment of Doomsday is going to come down to how much you care about its world and characters. If you’re a fan of previous Deponia games then totally, go out and play it if you haven’t already–though if you’re hoping complaints about Goodbye Deponia’s ending will be addressed, well, you probably won’t be happy about it.

But if you, like me, were previously unfamiliar with the series, then here’s the scoop. Like I said at the top of this review, I initially found Rufus a nearly insufferable scumbag. I’ve played and enjoyed lots of games with less-than-likable protagonists, but comic adventure games are all about clicking on every item and hearing the funny quips that your character has to say about them, and I rarely found Rufus’ mean-spirited gibes to be particularly entertaining. For about half the game’s runtime, I found myself wondering how much longer I could take his jokes about fat mothers-in-law and how emotional his girlfriends could be. 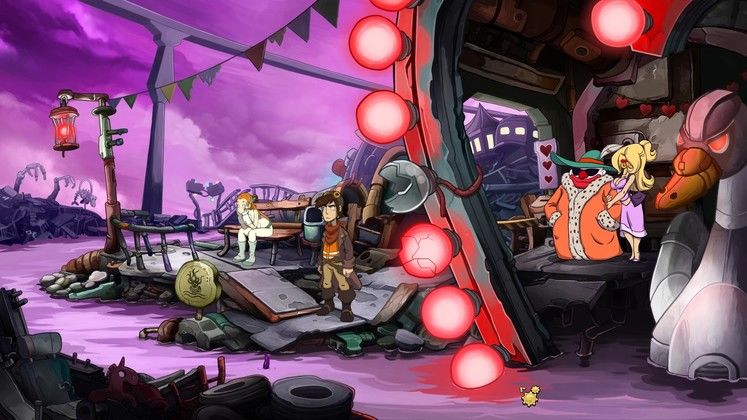 Can you spot the classic adventure game reference?

But about halfway through the game, the stakes got raised and the focus started moving toward the supporting cast. The time travel mechanics were becoming increasingly fun and convoluted, and the mess this was making of the characters’ lives was causing me to care about them in a way I previously hadn’t. So much so that, by the end, I wanted to go back to the original games and see what brought them to this point. I’m still not in love with Rufus as a protagonist, but Doomsday’s ability to make me care about him and his friends is the mark of solid storytelling. Which is exactly what I’m looking for out of an adventure game.

I can’t give Deponia Doomsday an unequivocal recommendation. Its protagonist is a major drag and a lot of its humor is straight-up lame. But by the same token, I can’t deny that it drew me in and made me care by the end. It’s a totally solid adventure game, and if you prefer a little extra bite in your old-school adventures, then it will be right up your alley.

The A-Team. You’ll know it when you see it. It’s a totally cool moment, done in a style that I’ve never seen before. And it’s the moment I realized I’d started to care about the characters. 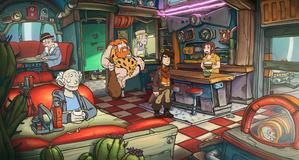