Did Chris Capel fall, or was he pushed?

There was excitement aplenty back in June last year when rumours starting building that Square Enix were getting ready to announce a new title in the excellent Deus Ex franchise, titled "The Fall". Then the first trailer came! It was real! It starred the protagonist of Human Revolution's tie-in novel Icarus Effect! It was... on iPad. And then the internet rolled its collective eyes, muttered "for f***'s sake Square", and trundled off to complain about there not being a jump button in Thief. I like many others said at the time "if this comes out on PC with proper controls I'll get it, otherwise I don't care". Now nine months later it's time to put our money where our mouth is, as Deus Ex: The Fall finally does indeed come to PC. Hopefully it's still worth buying.

The events of The Fall take place immediately before and during the Exciting Adventures of Adam Jensen, although it doesn't really tie in to Human Revolution except that it features a few recurring characters. As mentioned earlier it's a sequel to the Deus Ex: Icarus Effect novel by James Swallow, which I rather liked but you fortunately do not need to have read to understand The Fall's plot. Here the main player character is Ben Saxon, a British mercenary formerly of the sinister Tyrants (the much-hated bosses of Human Revolution) now on the run alongside ex-journalist Anna Kelso - whose own story is a little bit sidelined here admittedly. Holed up in Panama, they unwittingly get involved in a black market conspiracy to introduce a toxic alternative Augmentation medication to the masses.


The story is, on the whole, not at all bad and certainly kept my attention. The Tyrants return, and in particular their leader Jaron Namir gets a bit more fleshed out as he was a bit of a one-note villain in Human Revolution. Fans of the original Deus Ex will be particularly delighted that Bob Page returns in a significant role, even if it's only his voice (by the same actor), although N-Fusion miss an opportunity to also bring back loveable German orange-lover Gunther Hermann since he was in Icarus Effect (although his absence is referenced). The only real negatives for the story is that the voice acting isn't that good (although not Game of Thrones: The Game level bad) and that it ends in a cliffhanger that may or may not be resolved - and if it is, it might not end up on PC.

Let's not beat around the bush here, Deus Ex: The Fall looks, acts, smells and feels like a touchscreen tablet game thrown on to PC. A certain amount has been done by developer N-Fusion to make it a little more PC-palatable, most notably controls and no microtransactions (the shop now charges with in-game Credits, and it shocked me how necessary I found buying a number of things), but if you were hoping they were going to keep the same levels but otherwise completely use Human Revolution's controls and menus you'll be sadly mistaken.

So what have N-Fusion added for this PC port? First of all and to my great relief are keyboard shortcuts for weapons and Augs, specifically 1-4 for weapons and F1-F4 for powers. The game still incorporates the drop-down menus for both but this is a much more PC-friendly version. There's also Quick keys to use a Health or Energy item during combat which are helpful. Gamepad support is now in. Item highlighting can be turned off, and some more Anti-Aliasing can be turned on. Oh, and of course the game controls have been mapped to normal keyboard controls, WASD and stuff. And... that's about it. Now let me deluge you with a list of things that haven't been changed.


You can't turn off Waypoints, and sometimes they cover up the crucial radar. You can't redefine keys or any other graphics settings, so if you like FOV sliders and don't like having 'C' as crouch you're right out of luck. The Inventory is still a damn shop, even if you're spending Credits and not real money, and you can't sell anything. Buttons are huge. The UI is still the same cluttered touchscreen-based menu. Enemy bodies vanish quickly even when you've just knocked them out. The tutorials are a pain in the ass. The whole menu system is utterly confusing (seriously, which one's the Options?). The map is awful. Lip-synching is basic. There's not enough stuff to find. Working out how to shoot is actually quite difficult. And remember the kerfuffle I mentioned over Thief's jump button? There isn't one here either. You're lucky there's a couple of ladders.

Furthermore I don't know if it's because this was a quickly produced port, but The Fall is most definitely missing a layer of polish. Bugs abound, like sometimes items can't be picked up and the "see through walls" power often doesn't work, but there are few cases of straight outright design laziness. Characters talking over radio aren't lip-synched even though they're right in front of you, some usable objects aren't highlighted (like drawers or destructible walls), there's only one takedown animation, and at one point I discovered that some level designer had placed urinals in a women's restroom.

Then there's the level design itself, which is a whole 'nother paragraph. Areas are generally small, and I'm sorry to say Deus Ex fans but they're actually closest in feel to Invisible War. Cramped, often only on one level, with a loading screen a stone's throw away. Fortunately loading times are basically nonexistent (at least they were for me) but it's still jarring to know that one is waiting for you alongside a "do you want to go to..." message around every corner. Similarly the more open and often deviously clever design of Deus Ex or even Human Revolution is severely toned down.

It is present however. If you've read all that and haven't run screaming, congratulations, you're now at the good news. Because despite the tablet leanings and slightly shoddy portiness of the experience, once you get out of the tutorial beginning and into the game's setting of Panama City The Fall actually gets good fast and manages to keep the Deus Ex gameplay intact. Basically this means that it offers several variations on play that are all totally viable, from shooting to stealth. For example, getting into the exclusive Nightshades club - you could bribe the guard, talk him into letting you in, knock him out or kill him, hack the lock on the back door to the basement and use vents to get into the main club, or find the key to the lock by exploring then sneak past the guard. That's just to get into one location, and in action moments you get a lot more options - including setting robots on your enemies, just blowing everyone up with a rocket launcher, or unleashing your Augmentations to get by. It's incredibly fun and while slightly toned down from Human Revolution's equivalent it's still good.


Being Deus Ex your Aug powers are central to gameplay, and while a number of Human Revolution's don't feature as they aren't really needed there are plenty of useful ones. Most of them are passive like all the various Hacking skills, and the only ones that need to be activated are Cloak, Armour, Transparency (which as mentioned doesn't always work) and new ability Stealth Dash. Funnily enough Dash works similarly to Thief's 'Swoop' move, although you can Dash further and can manually select (with an arrow point that appears) where Saxon goes to. The Fall can get quite challenging in certain areas and you have the freedom to use your Augs as you want, so in that way the game is perfectly Deus Ex.

Once you get through a lot of the shock that comes with The Fall being a tablet conversion and all the little problems it has, fortunately you’ll find that it’s still a fun new slice of Human Revolution. Get used to the slightly odd un-redefinable controls, the cramped level design, and the silly shop-inventory (where you can only buy, not sell) and you’ll find the special Deus Ex gameplay itself is intact. Through skill and careful Augmentation use you can make your way through the game, discover new facts about Adam Jensen and Ben Saxon’s world, and basically have another 5-7 hour chunk of the Deus Ex experience, and at the end of the day that’s a good thing. Even if that experience is (shudder) Invisible War.

Much like Human Revolution, either punching a wall in with a guard behind it or turning a sentry robot against its masters. 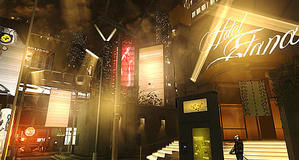