A stylish, badass return to form 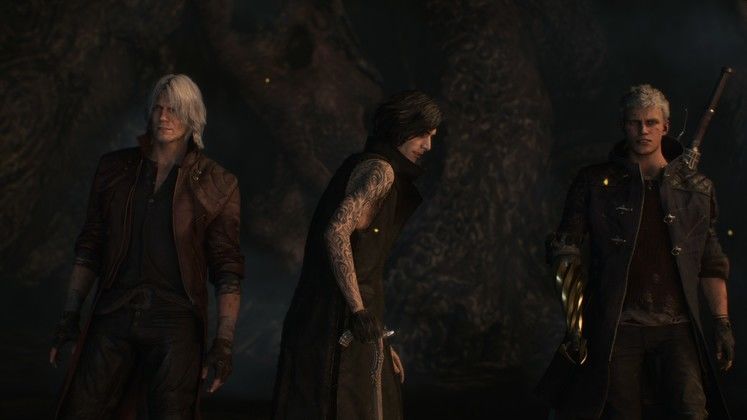 From sicking a demonic golem unto foes to blasting them apart with dual rocket launchers, Devil May Cry 5 makes no concessions when it comes to its over-the-top, bombastic nature. If over a decade ago Nero stepped in as a new protagonist, the crew grows once more with the addition of V and his demonic minions; and all of it makes for an adrenaline-filled package that sucks you into its madness right away and doesn’t let go until the very end.

Series veterans will find a lot that’s familiar in Devil May Cry 5. From linear levels, to the enclosed arenas where most fights take place, there’s a similar structure to that of past games. This time around, the focus falls mainly on combat with virtually no puzzles to speak of and only a handful of platforming sequences, mostly involving the collection of orbs and orb fragments. As in the past, orbs are either used for unlocking new abilities in the store –which pops up both in-between missions and inside them– or for expanding character health and Devil Trigger bars. 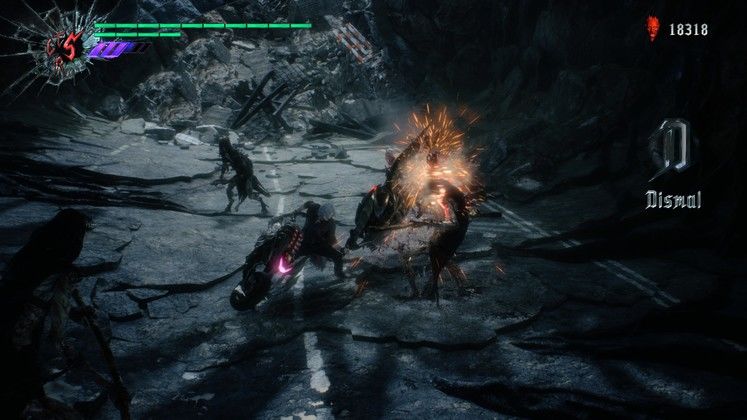 Although the three protagonists use the same control scheme relying on delayed mouse clicks and a handful of other keys to execute combos, their styles have just enough nuance to make them feel like distinct combatants. Nero, the most mobile of the three, wields his Red Queen sword and Blue Ivory revolver alongside the newly added Devil Breakers. These robotic replacements for his demonic arm, allow him to pull enemies to him (or himself to them), while also bringing a variety of different attacks to the mix. From rocket powered fists that repeatedly slam into enemies, to whips and area of effect electrical discharges, they often come in handy. Taking damage while attacking and charging them up unleashes devastating signature attacks that will destroy the equipped Devil Breaker, requiring you to look for pickups in the level or purchase more from Nico by spending red orbs.

V, being the most fragile, has his three demonic companions fighting in his stead. Where Shadow, the big cat, handles melee duties, Griffon deals with ranged damage. When his Devil Trigger bar is filled – by dealing and receiving damage – he can summon Nightmare into the fray. Whether by appearing from underneath, or slamming into the enemies in meteor form from above, Nightmare’s autonomous, powerful attacks absolutely wreck smaller foes and are quite handy against bosses as well. V is only required to swoop in and deliver the killing blow using his cane, showcased in a stylish final animation, staying away from the battle for the most part. 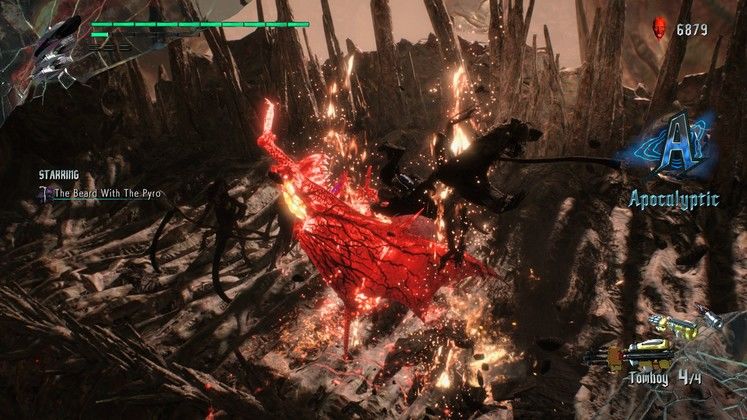 As opposed to the others, V can use both melee and ranged attacks at the same time. However, his battles are most prone to becoming a tad too chaotic. Keeping track of everything on screen does become tough in crowded arenas and accurately executing combos can, sometimes, be quite a challenge. There were times when V went offscreen and I found myself relying entirely on button mashing to get out of fights. V is also quite disadvantaged when dealing with mobile enemies, which can lead to a handful of moments where you feel rather helpless. However, even with these blemishes, his combat style still feels fresh and fun to use.

Dante’s specialty has always been versatility and Devil May Cry 5 capitalizes quite well on it. He’s able to wield an entire arsenal of weapons, including his iconic Rebellion sword and Ebony and Ivory pistols. The four styles, enhancing either movement, defense, ranged or melee damage also make a return, and being able to switch between them instantly adds an extra dimension to fights. Switching between shotguns, nunchucks and demonic fists is extremely satisfying, given how each weapon comes with its own meaty attacks and combos. If there were any doubts regarding Devil May Cry 5’s over-the-top acton, they’re all shoved aside once Dante gets his hands on dual rocket launchers and the Cavaliere motorcycle that he can use to shred enemies to pieces. Although the number of music tracks isn’t all that huge, few things are as badass as melting a demon’s face with burning rubber to the sound of energetic death metal. 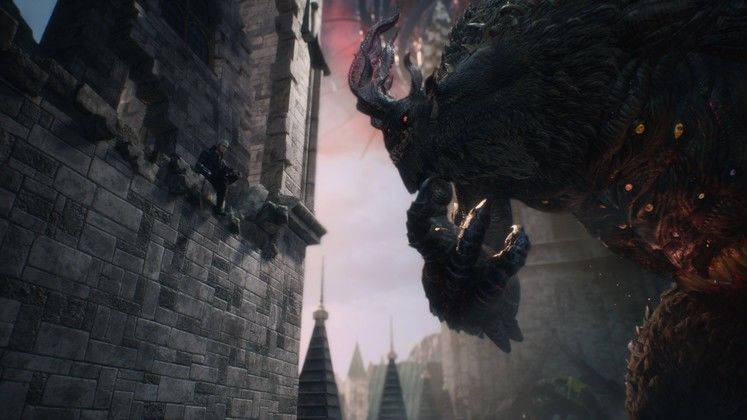 Devil May Cry 5’s fights are intense romps elevated by the title’s monster design and snappy controls. Perfectly playable using a keyboard and mouse, slashing monsters, evading attacks and chaining combos feels as great as it looks. Seeing that SSS rating pop on the right of the screen after several last-minute dodges and chained strikes is exhilarating, as well. The enemy roster trickles new faces in until the latter levels, and dealing with slow bugs requires different approaches to handling skillful armored knights. Then, there are the bosses. Whether lumbering monsters or agile fusions of man and instrument, they’re quite a step up from their lesser peers, being capable to dish out significant amounts of damage as you look for patterns to find their vulnerabilities. Boss fights feel like massive engagements where you almost meetyour match, which only pushes you to reassess how to approach these encounters on the go.

Devil May Cry 5’s story doesn’t beat around the bush, throwing you right in the middle of another demonic crisis. While the subject matter isn’t necessarily deep, it alongside the few twists and moments of character badassery more than fit the bill. It’s also great to see how, despite sharing in their defiance when faced with demonic horrors, each protagonist has a shred of nuance to them. Where V is pensive and mysterious, Nero comes off as young and enthusiastic, if somewhat inexperienced. Dante looks slightly gruffer but manages to have just the right amount of the cheesy, badass charm that’s expected of him. While DMC4’s backtracking is, thankfully, gone, the story does go back to the same moment from different perspectives, which does still somewhat hurt the pacing. 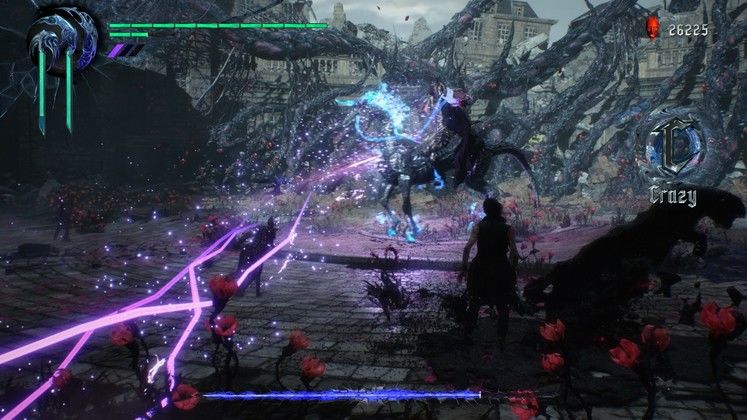 Built on Capcom’s RE engine, Devil May Cry 5 is outright gorgeous, aside from a handful of areas set in a destroyed city that comes off as generic. When stepping into its otherworldly locations, with fleshy veins running across the rough innards of a massive, unnatural, blood-sucking tree, there are lots of eye-catching things. It’s also not just the locations and explosion of color that contribute to the game’s great looks. Fluid combat animations turn fights into a stylish, deadly ballet, while characters display some of the most eerily natural facial animations out there. More than that, seeing someone pant after a tough engagement excellently transmits the effort put in to down a horned behemoth.

Devil May Cry 5 is a stellar return to form for the series, capitalizing on all the elements that make it great. Charismatic characters and stylish, over-the-top fighting mix together into an experience that keeps you hooked to your seat for the initial 15+ hours, and possibly more as you delve into higher difficulties. With very little beating around the bush, and a combat system that’s easy enough to grasp but takes a while to master, the title successfully pushes you to learn its combos, while providing an awesome power trip. Gorgeous and intense, Devil May Cry 5 is an unbridled serving of the purest form of action that few other titles pull off quite as well.

Obtaining the Cavaliere motorcycle and mincing crowds of demons with it. 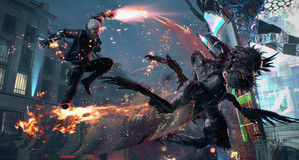