Distant Worlds: Universe is a gigantic 4x game set in space that combines the original Distant Worlds with all three of its expansions. It also marks the début of the game on Steam and hopefully its introduction to a wider audience – this is a real gem of a game that has passed under the radar for far too long.

It's often said that first impressions are everything, that the first moment you set eyes on a game you can tell whether it's going to be for you, from the layout of the UI, to the ease of adapting to the controls and even including the graphics. Fans of space simulations are an easier bunch to satisfy than most in this regard, pre-disposed as they are to more complex systems. Even so, Distant Worlds is a daunting prospect to behold, an act as simple as scrolling the mouse-wheel takes you from the safe embrace of a single star system to a galaxy containing thousands of the buggers. It's a game of huge scale and ambition where you are able to build space empires spanning a hundred stars as you war, trade and negotiate with a dozen other races and contend with powerful pirates and mercenaries.


Perhaps the part of Distant Worlds that truly differentiates it from other 4X space games is automation. Almost any part of the game can be automated, meaning you only perform the tasks that you want to. For instance, every ship in your empire can be custom designed by your own fair hand. From gigantic space behemoths whose weapons can level planets down to the smallest mining ship - you can design the blueprints and manually upgrade them as you unlock new technologies. But if your interest lies instead on diplomacy and big-picture empire management, a simple click of a button will ensure that you need never bother yourself with such menial tasks. This applies to many aspects of your empire including diplomacy, espionage, troop management and exploration - even warfare can be automated if you set up standing orders for your fleets.

Even if you choose the hands on approach, a large portion of your empire will still be made up of ships that you have no direct control over. Each empire is made up of State and Private enterprise. State ships fulfil (among others) the role of construction, exploration and military ships, meaning you'll be building space stations and mining bases, exploring the galaxy, patrolling it and removing threats. The private sector meanwhile is out of your hands - once you've built that mining base, it'll automatically send freighters to collect and trade the valuable minerals, ensuring that your distant outposts have access to the resources they need and keep money flowing freely among your empire. It takes the burden of the mundane right out of your hands, allowing you to focus yourself on the dozens of other more interesting activities that occupy your time in Distant Worlds.

The galaxies of Distant Worlds are busy places and it won't be long before you'll find yourself dealing with powerful Pirate factions who will alternately try and extort you, perform military missions for you and sell you important information. Once you meet other factions, trade will automatically flow between you unless relations turn sour and war approaches. Space Slugs and other vile space creatures can turn up to ruin your day and random or story events ensure that space never feels entirely safe, especially when a Silvermist nano-virus can appear and start to devour your ships and multiply, tearing its way through the galaxy.


Distant Worlds Universe is also extremely generous in allowing you to create the kind of game you want to play. From tailoring the size and shape of the galaxy to curbing the aggression of Pirate factions, you're given options of all shape and sizes to add and remove features as you please. There's even a separate mode dedicated to playing as one of the aforementioned Pirate factions.

Of course no space game is complete without an electric mix of races to inhabit the galaxy and there's a fairly broad array on offer here including space-dinosaurs, rats, cats, amphibians and the now compulsory race of sensuous blue aliens (see Mass Effect/Farscape for further examples). Each race has traits and specialities including different breeding rates, unique technologies and variable victory conditions. Interestingly, you're not limited to your starting race once a game has begun and by assimilating different races into your population you can gain benefits from diversity.

Even criticisms of Distant Worlds: Universe generally involve features you can simply turn off if you feel they're harming your experience. In one of my games for instance I accidentally triggered an end-game story-line that saw an ancient forgotten race rise up and attempt to enslave the galaxy (at which point you can choose to oppose or side with them). Unfortunately I was caught entirely unprepared for all-out war and my colonies swiftly fell as billions of my people were exterminated. Safe to say, that in my next game, I turned this feature off, allowing me to prosper in relative peace.


Pirates can be a real pain too, persistently raiding your territory, preventing outlying colonies from advancing and demanding protection money. Once again it's as simple as move a slider to remove or reduce this nuisance. The only lingering criticism of the game is that graphically it's simplistic and the UI takes some getting used to. I also found that despite running through 8 tutorials prior to my first game, I was extremely ill-prepared for what lay ahead. The best way to learn is to throw yourself in at deep-end and just play the damn thing, no matter how daunting a prospect that might initially seem.

A vast galaxy, a varied tech-tree, and a million and one decisions to make or automate. Distant Worlds: Universe is perhaps the finest 4x Space game in a generation, certainly since Galactic Civilizations 2. It's a challenging and complex game packed with features that allows you to choose just how you want to play it, while accommodating a wide variety of play-styles and strategies.

Wiping out the pirate faction who have raided you and made extortionate demands since the birth of your now glorious empire. 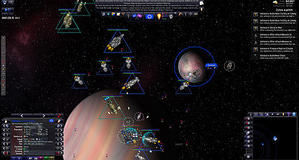 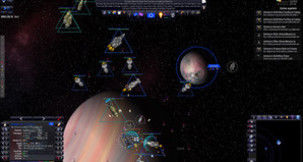