Re-releases are always an odd thing. They don't come around that often and when they do, it's not always clear how to approach them. Whilst Divinity II's own re-launch in an enhanced form is welcome, it is, at the end of the day, the same game we reviewed last year. It seems to be a bit of a theme with Focus Home Interactive lately, as we also recently reviewed Cities XL 2011, which again was merely the last game just slightly improved.

The original release of Divinity II was rather good in concept, but as a 'game' it still had much to be desired. Its problems were mainly technical, with some uninspiring and sometimes buggy mechanics, as well as the odd imbalances that made fighting your way through the game a real slog. Not to mention the ending was a bit of a slap in the face, and it made the whole adventure feel rather... pointless. Granted, the subsequent DLC fixed that story-wise, and Flames of Vengeance was actually quite a satisfying conclusion to the game, and in many ways far more interesting than Ego Draconis' more generic offering.

Now they have released The Dragon Knight Saga, which, essentially, is both Ego Draconis and Flames of Vengeance all rolled into in one package, along with several enhancements. The engine has been overhauled, although to be honest there's more noticeable difference on the console version than on the PC (and the game still does odd things at higher resolutions on my computer), but even before the overhaul, we never really had issues with the engine. Still, if you're going to improve your product, it never hurts to see what else you can squeeze out of the engine.

Extra quests have also been added in here and there, some of which seem to be padding but you could also argue that it helps balance out one of the games major problems - choke points. This was probably the single greatest flaw in the game, and in some instances a gamebreaker. For some reason, enemies that were a higher level than you in Ego Draconis would be more powerful than you than one would normally think considering that we're only talking about a couple of levels here.

Whenever you entered a new area, the enemies would often be a level or two above what you are, and given the games love of trying to overwhelm you with numbers, this would then create 'chokepoints' - sections of the game which were an incredible slog to get through. Eventually, you would manage to scrape enough experience points together to level up and even the playing field, but it was certainly very annoying to say the least. Thankfully, things have been improved dramatically on that score.

You're certainly getting good value for your money - there's supposedly over 60 hours of gameplay and 180 quests for you to sink your teeth into. The fact that both the main game and the expansion are lumped into one means that the sting at the end isn't quite so sharp, and you can jump straight into the expansion with your old character. Alternatively you can create a new one, and you're given skill and attribute points equal to the rank they think you should be by the time you reach the end of the main game.

Other than that though, not a lot has changed. The main story is left the same, the voice-acting is left the same - something I found rather amusing actually , everyone on Aleroth seems to be either upper-class British, or farmers from Devon. Considering it's developed by a studio hailing from Belgium, to a brit like me that's rather funny. Combat is largely the same as well, at least in how it feels. It's a bit old school, you just tap numbers and click until either you or the enemy is dead, and it lacks a certain flair that people like Bioware have managed to inject recently, but never mind.

The Dragon Knight Saga is only really going to appeal to new audiences however. Those who already own Ego Draconis and Flames of Vengeance might as well stick with what they have, as they will find nothing new here. If you don't have the DLC, then possibly get DKS if you can find it cheap, but you should also still be able to buy it separately as well. Still, given the game's inherent lack of tangible choice, and by extension replay value, you should have completed the whole thing by now anyway, so there's no point in worrying about it.

Earning your Dragon form is still very rewarding, and takes gameplay to a whole new level. 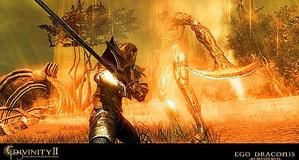