Hell hath no fury like a Doom Slayer pissed off 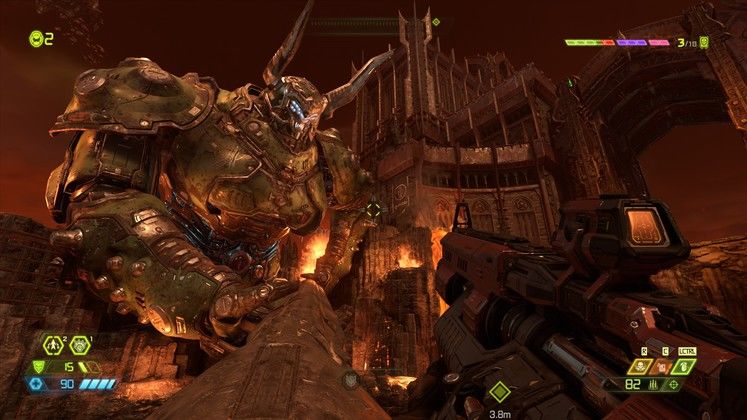 Although it opens with a few relatively sedate moments, Doom Eternal doesn’t take long before it makes it clear that it’s bigger, louder and more intense than its predecessor. “Against all the evil that Hell can conjure, all the wickedness that mankind can produce, we will send unto them only you.”, says a mysterious voice as the campaign begins. At the same time, the Doom Slayer steps through a portal leading to a besieged Earth, prefacing a new odyssey of ripping and tearing Hell’s denizens to bits that pushes the trademark ultraviolence of the first-person shooter series to the next level.

Right off the bat, Doom Eternal boasts grander locations, reflecting the monumental conflict at its core. While “hellscape” remains a defining term for its levels, the areas you’ll visit offer a mixture of crumbling buildings being overtaken by organic overgrowth, high-tech hallways and fantasy-inspired cities. The new locations feed into the story which not only expands on Doom’s lore – establishing a fairly detailed history populated by several factions – but also reveals more about the Doom Slayer himself. The levels feel larger, have quite a few impressive vistas – like colossal remains of demons and battle mechs towering above all else – and are choc-full with collectibles often hidden behind secret routes. 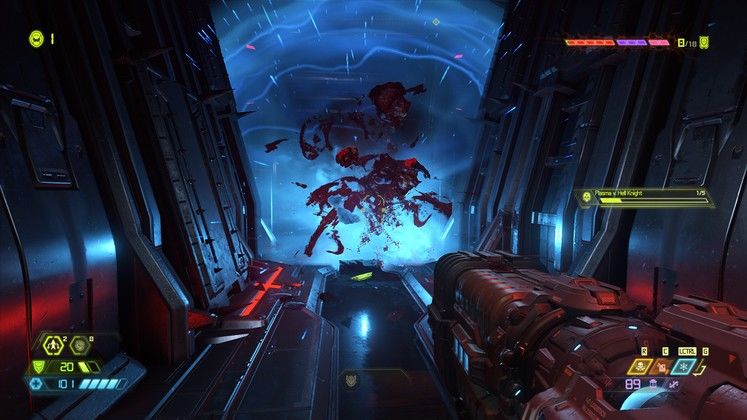 Doom Eternal elevates its predecessor’s combat by adding a broader array of executions and an emphasis on speed, dodging and movement which make for a frenetic, explosive package that effortlessly arrests attention. The pounding drums and downtuned guitars of its soundtrack lock you in with the Doom Slayer’s actions as you dash between foes, unloading bullets, rockets and plasma into the metal and fleshy bits of any demon blocking the way. Glory Kills punctuate the combat’s unrivaled brutality by letting you rip open chest cavities and stick fists down the throats of weakened opponents. Enemy weak points reward quick thinking and fast swapping between weapon mods, eliminating several large demons in a row by disabling them in just the right way being one of the best feelings that video games as a medium have to offer.

The Doom Slayer’s arsenal is comprised of mostly familiar weapons that pack a serious punch. Most support two mods which give them vastly different alternative fire modes. The classic Rocket Launcher lets players fire guided rockets after locking on to foes or detonating rockets mid-flight. The Chaingun can turn into a mobile turret – gaining a few extra barrels in the process – or pop a defensive energy shield that absorbs incoming projectiles. Each mod can be upgraded using weapon points earned through combat, eventually opening up that weapon mod’s mastery which, in turn, tasks you with killing opponents in specific ways for an extra passive infusion of power. 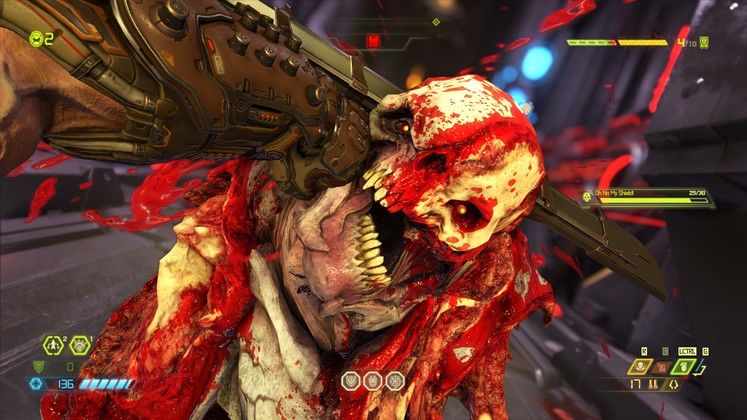 The greater emphasis on weak points really makes different mods shine, requiring you to switch between them on the fly and aim at the right body parts for a damage boost. Cacodemons alone can be weakened in one shot by making them eat the Combat Shotgun’s sticky bomb. Turning your chaingun into a turret and peppering with bullets a charging Hell Knight can easily stop it in its tracks. As battles can easily get crowded, making use of double jumps, portals and jump pads to position yourself and exploit these specific weaknesses quickly becomes a feat of skill that, when pulled off, contributes greatly to the feeling of ultimate badassery that Doom Eternal dishes out on a regular basis.

Doom Eternal continues to weave Glory Kills and chainsaw executions surprisingly well into its richer and more intense fights while bringing some new additions to the table. Just as Glory Kills reward health and chainsaw kills result in a shower of ammo bursting from the sliced corpses of your foes, the Doom Slayer’s Flame Belch sets enemies on fire, making them spawn armor shards when damaged or killed. A shoulder-mounted grenade launcher lets you interrupt demons or temporarily freeze them, while the Blood Punch – charged by Glory Kills – turns everything it touches into a cloud of bloody dust. These new moves complement the Doom Slayer’s existing arsenal, properly using them in the midst of battle requiring not just quick reflexes but also strategic thinking. Killing a pack of demons under the effect of the Flame Belch quickly fills up your armor bar, which can make the difference between emerging triumphant and reloading a checkpoint. 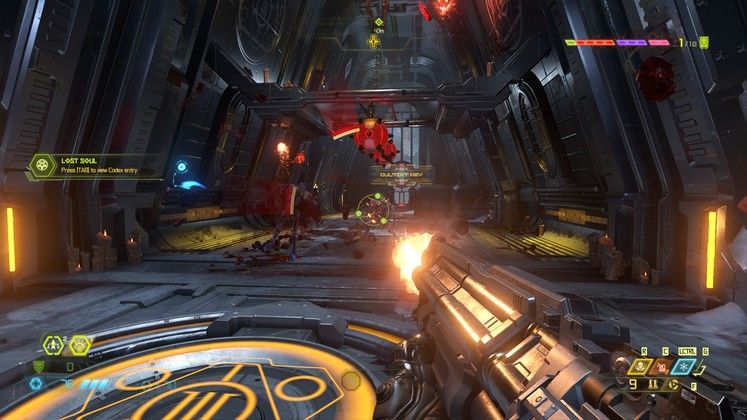 Over the course of its 18+ hour campaign, you’ll encounter a plethora of demons, both familiar and new. The likes of the Cacodemon, Mancubus and Hell Knight return in all their grotesque, malformed glory while returning faces like the Arch-vile summoner and new ones like the Marauder can turn a fight’s intensity up to eleven. The latter especially stands out, requiring you to pay special attention to it and exploit its very brief windows during which you can deal damage. While Doom Eternal thrives when you’re turning scores of demons into helpless viscera, these intimate one-on-one duels against Marauders add a different kind of nuance that further perfects the title’s combat.

Doom Eternal’s upgrade system reaches further than just its weapons. Praetor Suit points can be spent to enhance the Doom Slayer, allowing him to recharge his grenade launcher faster or switch between weapons and mods more quickly. Runes also make a return, letting the Doom Slayer perform actions like initiating Glory Kills from further away or slowing his descent in mid-air, while players can also find Sentinel Crystals which passively increase ammo, armor and health amounts, making for a subtle-yet-tangible sense of progression. 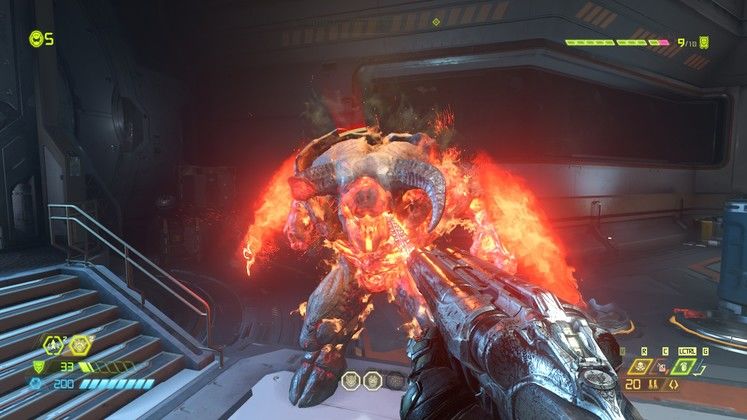 Doom Eternal also expands on its predecessor’s platforming which, for the most part, is a technically sound addition. With the exception of one level towards the end, double jumping, vaulting, swinging on monkey bars and jumping between sticky portions of walls feels responsive. Unfortunately, the relatively high amount of these sequences has a negative effect on the pace of the campaign. As much as they further establish the Doom Slayer’s superhuman strength, platforming leads to too much time spent away from combat and often feels superfluous. The Fortress of Doom – the Slayer’s base – also plays its role in breaking the pace of the game a bit much. You’ll often head back to it in between missions and, while it does let you spar with demons, view collectibles and unlock skins or a few upgrades, it feels like a place more suited for Doom Eternal’s post-game.

In larger combat arenas, however, vaulting and swinging on monkey bars can meld nicely into fights, resulting in plenty of potential for acrobatic kills that see the Doom Slayer launching off a monkey bar to gouge out the eye of a flying demon in mid-air, only to dash back and kill several foes underneath using a rocket, followed by lodging the Super Shotgun’s Meat Hook – which is immensely satisfying to use – in a different demon’s chest and blasting a chunk of it away with a thunderous double-barreled shot, all in a manner of seconds.

Note: This review is based on Doom Eternal’s singleplayer campaign as its Battlemode was not available prior to launch.

Visually, Doom Eternal boasts a number of impressive sights, while Glory Kills and bullet impact translate their intensity past the screen very well. Overall, the title is an improvement over its predecessor, with the exception of a few small portions of levels that greet you with ugly textures which give them an unfinished feeling. Luckily, they were few and far between in what is, otherwise, a glorious, violent visual spectacle.

Doom Eternal’s combat encounters are, quite possibly, the best in the genre. Snappy movement, a varied arsenal and executions, alongside a soundtrack that mixes atmospheric synths with pounding drums and devastating downtuned guitars all feed into the game’s trademark frenetic action. There’s unrivaled euphoria in crushing a demon’s head underfoot before moving on to kill hundreds more of his friends in equally brutal ways. Really, the only thing holding Doom Eternal back from reaching its full potential is its platforming which – although improved – take up too much time that could have been spent doing what Doom Eternal does best: letting you shoot the literal Hell out of scores of demons.