When we posted our top ten picks for Dreamcast games we'd like to see on Xbox Live Arcade, we thought we'd done a pretty good job of covering all bases. This first Dreamcast Collection for the Xbox 360, then, doesn't actually contain a single one of our picks. Ahh... umm. Right.

That's not to say it's not a nice collection, but it's perhaps a little too... safe. The obligatory Sonic Adventure is on there, as is Crazy Taxi - two games that were already available via XBLA. Sega has then thrown in a couple of niche classics, namely Dance Channel 5 Part 2 and Sega Bass Fishing, both of which are coming to XBLA soon.


This fact rears an issue with the value of the collection. Buying each of the games separately on Xbox Live Arcade will cost you only a couple of quid more than if you pick up this retail disc - but then again, if you buy them from XBLA, you're paying that extra money so that you don't have to dig out the game disc every time you want to play. Of course, it also means you don't have to pick up all four if you've already played one of them to death.

In other words, buying the Dreamcast Collection makes no sense whatsoever.

Aaanyway... let's move past this epic downer and talk about the games, shall we? We'll only briefly touch on Sonic Adventure, since it's been proven that every single person in the entire world has (probably) played this particular game by now. Twice. It's Sonic's first 3D outing ported for your 'ah I remember back in the day' pleasure, and in all honesty, it hasn't aged well.

Platforming sections feel godawful, and some of the collection detection is pants. It's incredibly buggy in places, and can be really infuriating. The voice-acting makes us want to jump into the game and punch Sonic and Tails in the face. Yet there's still something so playable about it all, and if you haven't given the game a playthrough before, now is the best time to do so. You know, before it becomes even more unbearable through age.

Crazy Taxi, on the other hand, is still as wonderfully addictive as it always was. It's fantastic how a complete beginner can pick it up, collect a few cab fares and feel like they've had a great time, while more experienced players know all the little tricks to getting a seriously high score.


Again, it's a direct port, although the Xbox version does come with leaderboards for checking out how you face off against the rest of the world. We thought we were pretty good at this game. How wrong we were.

One gripe, however - the music. Where there was once the beautiful sounds of The Offspring and Bad Religion, there's now "Generic Rock Band A" and "Someone Else You've Never Heard Of B". Gamers who have never played Crazy Taxi before won't give it a moment's thought, but those who played the original 2000 Dreamcast will feel like they've been violated.

On to the more kooky inclusions in this collection. You may well have missed Space Channel 5 Part 2 the first time around, with its rhythm button tapping and quirky animations. This is the sort of game that makes you initially wonder 'what the hell am I playing', until it all finally clicks into place, and you spend the rest of the game laughing your head off.

Enemies dance, and you have to get your groove on right back at them, hitting the correct directions and buttons. It's essentially a game of Simon Says to the beat, although the animations and settings make it so much more. A great laugh if you can get a few friends around and crack open the beers, although it does get a little repetitive rather quickly.

Fortunately, just as the repetition is kicking in, 'Space Michael' pops up. Michael Jackson's inclusion in this game is perhaps one of the most strange and amazing moments you will ever witness in a video game, so make sure you savour it. It's hilarious.

Finally, Sega Bass Fishing is simply glorious. We envision that Sega was working on some boring fighting game, and halfway through production through 'you know what, screw this - let's go fishing!' When a fish grabs your hook, the announcer screams 'FISH!' and you then spend the next minute battling against the odds to get that wriggling bastard in your boat.


There isn't as much explanation as we would have hoped, in that you're left to your own devices to work out how you're meant to play, and even then it's not always obvious. Yet there's something so entertaining about the awful very-last-gen graphics and animations, and the simplicity of 'throw lure, coax fish, reel in, repeat'. If only it came with the Dreamcast fishing rod!

The games in the Dreamcast Collection, as separate entities, are each enjoyable in their own right, and all worth playing if you haven’t yet tried them. However, as a whole, this is a package not worth buying. Simply grab them each separately (preferably when they each appear in the inevitable sale), and your life will be a whole lot more fulfilled.

“It’s time to make some craaaazie money, are yer ready?” 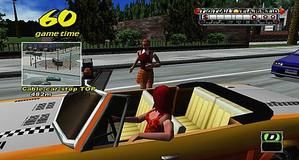