Anyone ever play Hero Quest? It’s a simple Warhammer board game with four characters venturing into a dungeon to loot the place and defeat a boss. No? What about Warhammer Quest, which is much the same except a bit tougher? No again? Oh, right, Games Workshop suck at re-releasing their classic board games. Well, it’s basically Dungeon Rushers: several heroes go into a dungeon that reveals itself as they venture through it, battling skeletons and orcs, avoiding traps and searching for the biggest treasure in the dungeon. We’ve already had the pretty dull iOS Warhammer Quest game so can Dungeon Rushers do any better?

The story doesn’t really matter, but a young boy named Elian dreams of more than serving drinks and heads out for a life raiding dungeons and getting sweet loot. He meets a few friends along the way, including an accountant dwarf and a sneaky minstrel, and they form a band to go on adventures and find more loot. And that’s it. The writing is quite whimsical and occasionally even funny. I particularly like the denizens of the various dungeons who don’t take kindly to being beat up. So expect a light-hearted adventure, but not a particularly deep one.

There are two parts to the gameplay apart from buying and crafting items between missions: exploring the dungeon and fighting in it. The exploring takes place on a top-down “board”. Each room is a single square and every turn your party moves to the next square chosen out of up to four directions (fancy). You reveal the map as you explore but unless you use special powers, like Elian revealing two squares in each direction or Thorgrim identifying a treasure or event spot, you have no idea which way heads to treasure or leads into certain doom.

Every move is a risk, and that’s both stressful and exhilarating. It’s basically exactly what Dark Souls taps into to keep people playing, except Dungeon Rushers does it with a smile while trying to hide that copy of Hero Quest behind the sofa. Traps can be overcome but only if you have the finite resource that is stamina, event locations can either be a blessing or a curse, and there could be enemies waiting on the very next square but you’ll never know until you move. 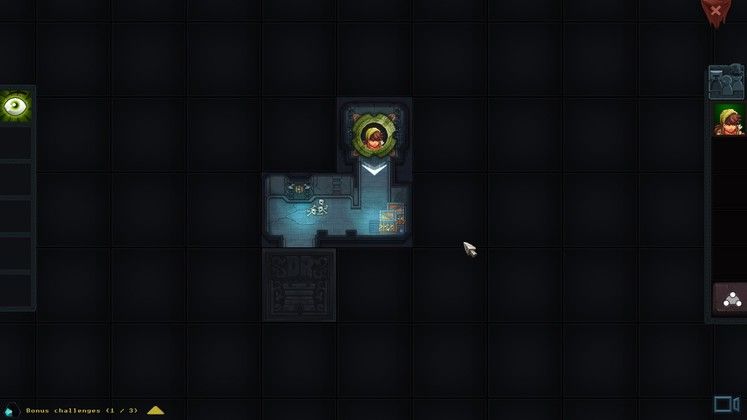 Where it differs from Hero Quest is the combat. It’s very classically turn-based, the order decided by what level a character’s Speed is. Each character takes a go with a straight attack, a special attack that uses Mana, an item, or Guard which I can’t imagine why anyone would ever use. Heroes and Enemies each get two rows, and only ranged weapons or magic attacks can reach the second row until the one in front of the enemy in the back gets defeated.

There is no avoiding getting hit so winning just involves outlasting the enemy. This wouldn’t be so bad except that health potions, like all other items in the game, are finite. You can only buy one from the shop between missions and if you’re lucky you might either be able to craft one or find a healing event in the dungeon, but otherwise you can only face a certain amount of battles in a level before you die and have to play the whole thing again. 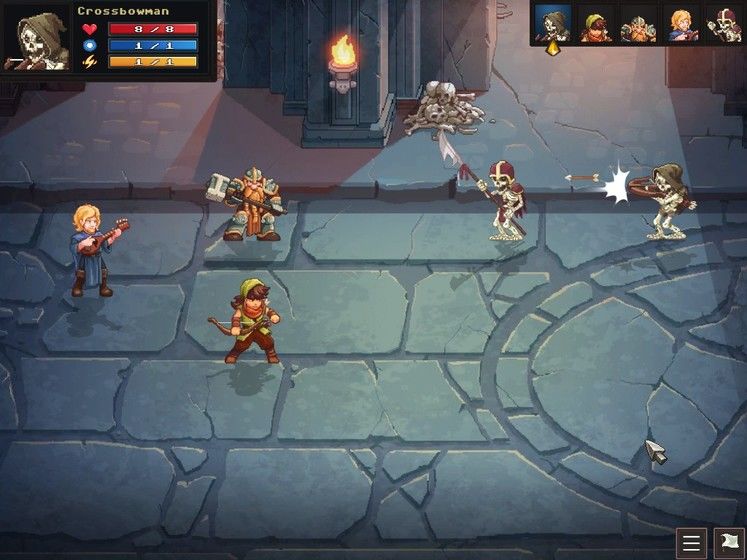 No matter what happens you’ll eventually get to a level you can’t get through and be forced to grind old dungeons to level up, which brings me to my main complaint of Dungeon Rushers: it’s just too repetitive. The humour hides it to a certain extent but once repeating levels is thrown in even that shield can’t be hid behind. While undeniably addictive when everything’s going smoothly the gameplay is puddle-thin, with very little to do other than clicking to move up, down, left or right and then desperately trying to get through a battle with as little damage as possible. Then keep on doing that until you can’t bear it any more and uninstall. There are cute dialogue moments, funny signs, and the odd different dungeon, but I was bored of Dungeon Rushers before I even filled my party up. In fact I was fed up with it the second I couldn’t progress any further and had to grind an old level.

If Dungeon Rushers has one big saving grace it’s the easy-to-use level editor, which is rather neatly built into the main game. After a few levels a short dialogue plays where Thorgrim suggests that building their own dungeon would be a good way to earn some extra coins. I can’t say I ever got any money for my creations, but making a dungeon was strangely addictive. 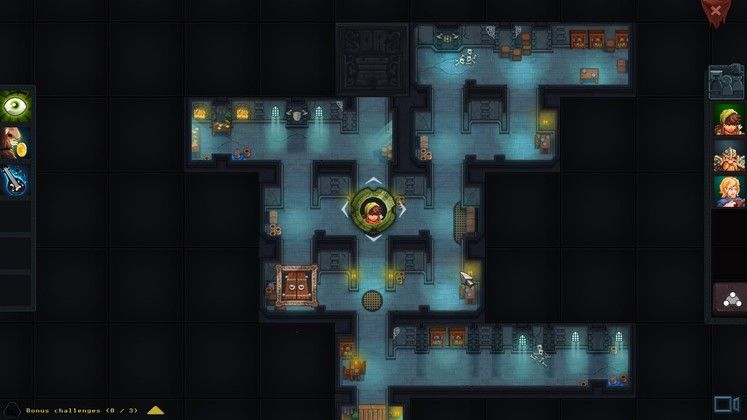 You can add everything, from placing enemies and traps to character dialogue and signs. I had a load of fun just placing comedy signs all over the place as if two sign-makers were having an argument. Secret doors, red herrings, different types of loot, keys, password-encrypted doors, even different types of dead end are available for you to customize. Then, at a click, you can upload it to Steam or easily overwrite it if you tweak it later. I honestly found putting mad funny dungeons together more entertaining than the main game, and I usually don’t have the patience for any sort of game editing. I don’t even like Minecraft.

I’m pretty sure that any computer that can run Baldur’s Gate can run Dungeon Rushers. It’s not a particularly system intensive game nor an attractive one, but it’s not meant to be. It’s meant to be a simple, fun dungeon crawler that you can play a few minutes at a time on, and the worst that’ll happen is that your level might take 12 seconds to update rather than 10. So don’t worry about performance. 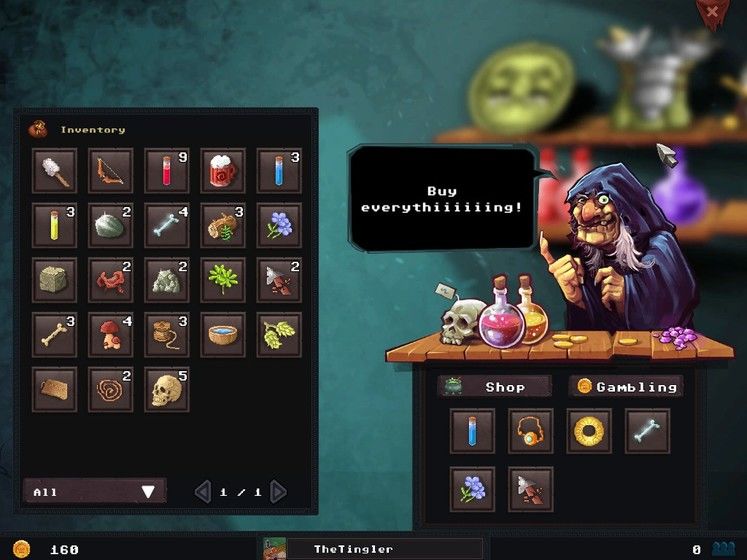 I’m not oblivious to the fact that Dungeon Rushers currently has a “mostly positive” rating on Steam, but then once you get reading them there are actually quite a lot of negative reviews and even the positive ones admit that it’s a pretty linear, repetitive grindfest that would feel more at home on mobile. It can also be addictive, as while defeat can come quickly you’re only ever a few steps from the same point, and the constant feeling of risk and reward scratches a very potent itch.

It’s having to repeat old levels that I take issue with the most. Dungeon Rushers is the type of game where you want to continually press on and find the new exciting thing in the next dungeon, not to mention some more excellent funny conversations. That’s fun. You do not want to make all the right moves then find yourself up against an unbeatable group of foes that make short work of your group and force you to replay several already finished stages just to level up a bit to beat them. That’s boring.

Dungeon Rushers may evoke fond memories of the Hero Quest board game but it doesn’t manage to be anywhere near as involving. Still when things are going right it’s a hugely addictive game, with simple gameplay based around risk and reward and some tremendously entertaining dialogue. Nevertheless the story is non-existent, the gameplay basic and repetitious, and nearly every stage you’ll be forced to replay old dungeons to grind your characters up a level. The level editor is the surprising highlight, and we actually found it more fun to make dungeons than play them.

If you’re in the mood for a simple dungeon crawler to kill a few minutes, Dungeon Rushers is nicely affordable. Anyone else, you might want to upgrade to Hero Quest. You’ve got a few friends right?

That sweet moment when you find the correct loot. 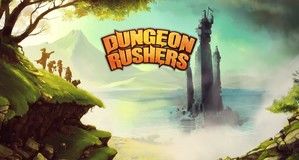