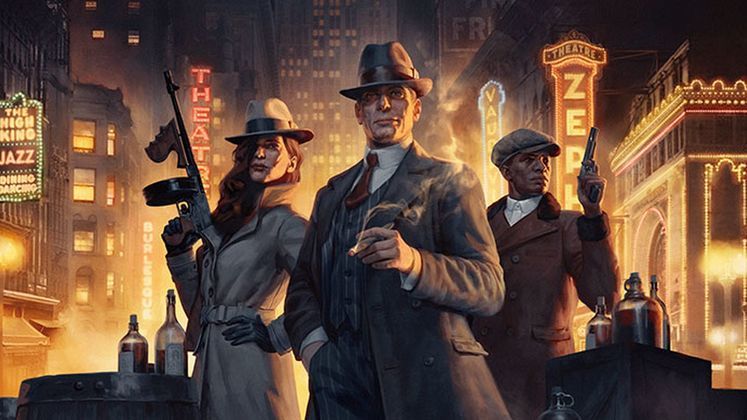 The image of the ‘gangster’ has been romanticised and embedded into a kind of American mythology - one that is expressed through a series of tropes which have been heavily influenced by cinema. Empire of Sin (EoS), by Romero Games, draws upon these tropes, infusing them into the game’s characters, dialogue and aesthetic style. It leans a little too heavily on these stereotypes, coming off as a little clumsy or camp. But this is a stylistic choice and fundamentally a subjective criticism. My main problem with EoS is that the strategic layer of the game (the day to day running of an organised crime family), feels mechanically sparse and consequently, underwhelming. For those wanting a deep strategic or tycoon-based gangster experience, you might want to exercise some caution before purchasing.

With that said, we should probably clear something up from the get-go. EoS is not trying to be a successor to the 1998 classic, Gangsters: Organised Crime (G:OC)—the developers have made this clear, despite the frequent comparison. Instead, EoS plays out like a combination of Jagged Alliance and X-Com, which taken together with Civilization, represents the three games that influenced EoS’s development. I would argue it also draws upon the character interactions and RPG elements of Crusader Kings III. Regardless, it’s important to make this distinction upfront, because if you are expecting EoS to play like G:OC, you’re going to be disappointed. Yet, it is also a helpful comparison because it highlights the key weakness of EoS, namely, its strategic gameplay. 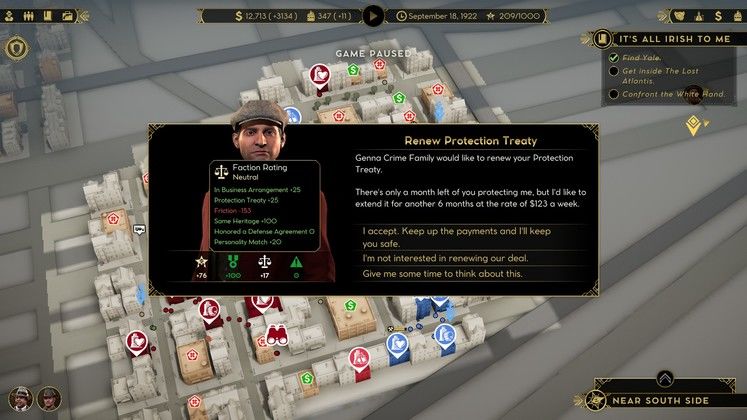 EoS can be broken down into three respective parts. There’s the strategic management layer, the tactical combat layer and the RPG/character layer. Individually, they each work well enough, though frankly, there’s nothing inherently innovative about any of them. With that said, Romero Games has done a good job of integrating these individual parts into a cohesive whole. Got some extra hooch being stored in one of your breweries? Supply it to another faction for a tidy profit and a boost in diplomatic relations. Upgrade the security rating of a speakeasy and you get extra bodies to control during a firefight. Each of the layers feel as though they impact each other on some level.

As for EoS’s combat mechanics, they are solid although they are not innovative. If you have played an X-Com game before, then you know what to expect. Swap a plasma rifle for a Tommy gun and you get the picture. Ultimately, if you are tired of X-Com’s tactical combat, the Prohibition paint job won’t feel inherently unique or fresh. 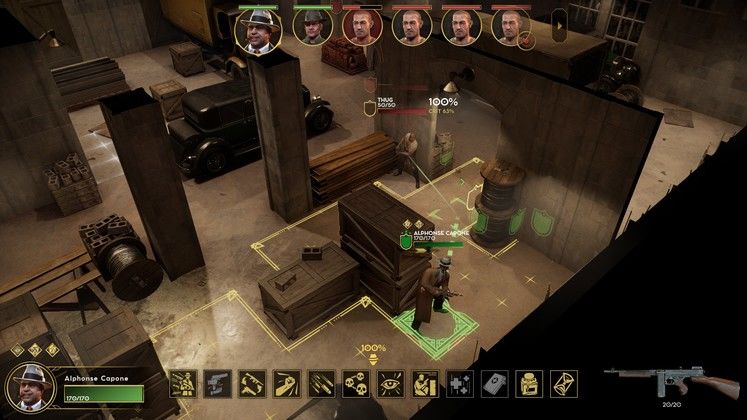 With that said, there are new character classes and new abilities to study. There are also a number of new and interesting traits to explore, which are gained through various RPG interactions. Leave a character in a speakeasy for too long and they might gain the ‘drunk’ trait. Consistently use a shotgun and you will get a bonus to your marksmanship ability. Again, it all ties together well and is interesting, up to a point. After a while, combat becomes a bit too frequent—especially during a gang war. Then, as the game drags on, combat becomes tedious—since there’s no way to auto-resolve combat encounters (at least not in the review build we were playing).

Like the tactical layer, the RPG layer of EoS also feels solid. There are fourteen unique bosses to choose from at the start of the game, some real, some fictional. Each one has a background and story to follow. There is also a pool of fifty-five gangsters that can be hired, with many of them having their own narratives. Whether you choose to pursue these story elements is left to you. The gangsters also have friends, enemies, romantic relations, all of which adds some interesting choices and relationship dynamics to your crew. Story missions offer branching dialogue choices and confer various traits or items based on differing outcomes. They can also have lasting effects. In one mission, a key member of my gang left because I would not let them ‘whack’ a civilian that had wronged them. It certainly adds some personality and background to the characters that inhabit the world. 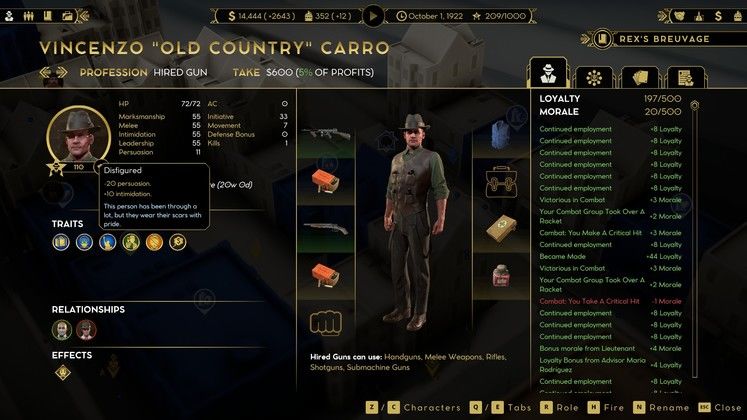 Going into EoS, I was anticipating its strategic layer of gameplay. To its credit, what’s there works well. Unfortunately, it feels a little lite on options. And even though they are different games, I can’t help compare EoS’s strategic layer to that of G:OC. That’s because the latter captures the feeling of running a criminal empire in a way that EoS does not. In G:OC your legal business fronts are just as important as your illegal rackets. You need to show a legitimate income to account for your ill-gotten gains. It’s not enough to extort store owners into paying protection money, you need to send ‘hoods’ to collect payment. EoS strips away all these facets and streamlines everything. You don’t have legitimate businesses, just rackets. What’s worse, is the lack of variety in rackets (speakeasy, brothel and casino). The only other buildings available are a brewery, which makes and stores your moonshine. A hotel, which adds bonuses to your other businesses and a safehouse, which allows you to setup a lieutenant (aka: the AI), in another neighbourhood around Chicago. That’s it! No loan sharks, no illegal lotteries, no insider trading rackets, counterfeit presses or grifters.

The lack of strategic gameplay options means the gameplay loop quickly becomes repetitive. You move your gangsters around a map, build some rackets, a war breaks out and you fight some battles. In G:OC you had a wider set of options with more depth to them. You could leave the life of crime and go straight or run for political office. You could bribe the mayor, the DA, a judge, jurors or witnesses (not just the police). You could extort local businesses or commit arson against an uppity civilian or an enemy’s racket. You could kidnap people or just beat them up. You could own ‘turf’ within a neighbourhood without having to own an individual building or racket. When you start to compare it to G:OC, the strategic layer of EoS feels one dimensional. 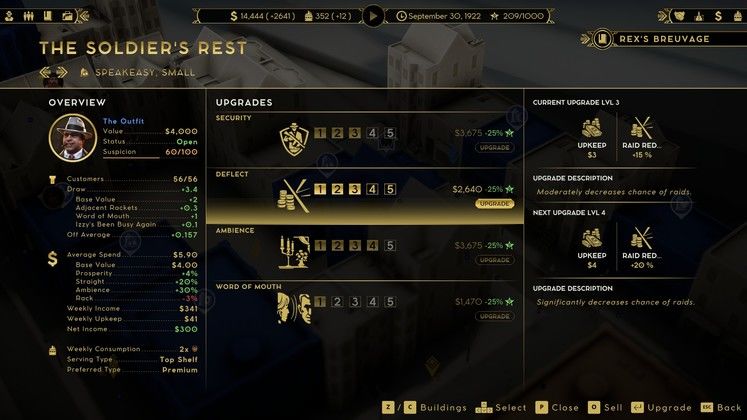 However, I did appreciate the details that were included in EoS. I liked the way you could upgrade various aspects of your rackets. One speakeasy might be a dive, whilst another has been upgraded into a swanky club. Your brewery might start out producing swill but with some time and investment, can be upgraded to produce Whiskey—preferred by wealthier patrons in wealthier neighbourhoods. It does get a little unwieldly however, because you end up owning a large number of the same rackets. It also means that after a while, your rackets all start to blend into each other.

Ultimately, EoS is not a bad game. But the lack of content within its strategic layer holds it back from living up to its full potential. With that said, I think the tactical combat and RPG elements are pretty solid. If you are drawn to lots of X-Com style tactical combat and some over the top Prohibition themed hijinks, you will find some fun within EoS. However, people looking for a deep strategic or tycoon focused experience, will likely be disappointed.

The game has solid tactical combat and RPG elements but is let down by a weak strategic layer.

Using a Tommy gun and the ‘Kill Chain’ ability to string together four consecutive kills in a single turn.