CAN YOU ESCAPE THE DEAD ISLAND?!

“Please Deep Silver, give us a third person cel-shaded Dead Island spin-off!” said no one ever. Yes, I’m starting this review on a mean note. When asked to review Escape Dead Island my first thought was “is that the MOBA?” and my second thought was “hell no”, but I need to eat this month so here I am with very low expectations. Dead Island was fun in co-op and Dead Island 2 is looking great… but anything else in the series I couldn’t care less about, particularly a single-player-only last-gen-only comic book-style survival horror. Which made it all the more surprising that I actually enjoyed myself playing Escape Dead Island. Well, at the start.

Once again introducing a new dead island to Dead Island, here we find ourselves stranded on the sunlit island of Narapela. Our player character Cliff Calo, self-confessed douchebag, and his friends Linda and Devan have sailed here to investigate the clearly-suppressed story of Banoi. Narapela’s actually meant to be clear, but it’s obvious as soon as they land that it’s not. Their boat gets blown up, zombies roam the wilderness, and a strange Chinese woman called Xian Mei (who you may recognise from the main games, if you weren’t playing as her or care) claims to have the answers you’re looking for. But is this really happening or is it in Cliff’s head? 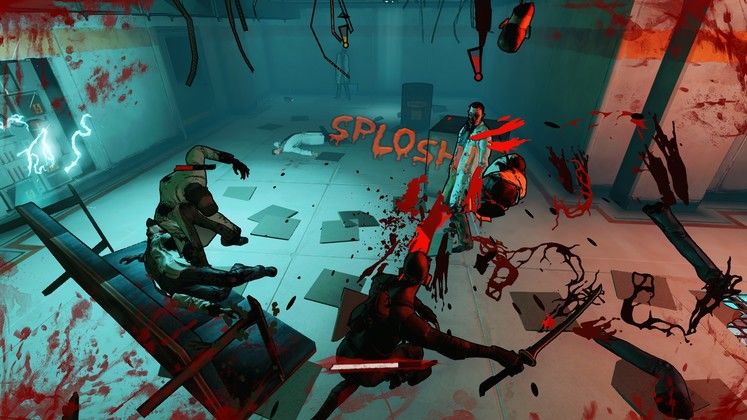 Don't be fooled. The game doesn't stay this awesome

By far the best part about Escape Dead Island is how developer Fatshark messes with your head. The way that they do it works similar to the sanity effects of Eternal Darkness or the Scarecrow sections of Batman: Arkham Asylum. As you progress through the game strange things will happen, like walls closing in on you or being hunted by a train. Even the Checkpoint system is designed to mess with you, as when you die you physically go back in time and Cliff looks about as if he’s just woken up from a dream. I won’t spoil how things go but I loved how you were supposed to second-guess every moment and not trust anything the game tells or shows you.

While this was enough to get me through the game sadly it’s nearly where the praise ends. One last good point before then: I love the comic book-style presentation. It’s not just the cel-shading, there’s also onomatopoeic words that appear alongside many sounds you make (my favourite being “splish splash” when you walk through a puddle of water) and hand-drawn cutscenes. It’s sweet, but slightly at odds with Dead Island’s whole realist schtick and doesn’t really go with the “slowly going mad” thing. If I was being pessimistic I’d say it was just to cover up the very cheap last-gen visuals that have nothing of interest to see at any point. Seriously, if it wasn’t for the cel-shading the whole game would look very drab, and even with that style Narapela is a very dull place to explore. 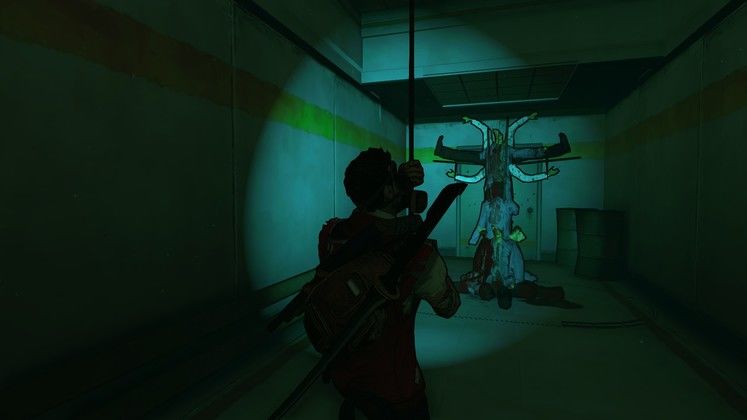 The messing with your head bits are undoubtedly the highlight

Narapela isn’t open world like other Dead Island games. It’s very linear in fact, apart from the occasional room or corner that probably hides a hidden audio log, postcard, health upgrade, or ammo. Areas are quite small, and you’re not going to have swarms of zombies to fight off - four or five at absolute most. You can sneak up behind any zombie, no matter how powerful, and stab it in the neck for a quick takedown, bash/slash your way through with a melee weapon which is generally the most effective, or shoot your way through which isn’t really advisable since ammo is quite limited. Oh, and you can take pictures of certain things too, which isn’t really for any purpose except to satisfy completionists. And that’s basically all the gameplay. Plus just having to face zombies all the time, even ones that can move faster or spit acid at you, and keep taking them down the same way means the whole thing gets very repetitive, very fast.

Which is made far worse by Fatshark deliberately padding gameplay time out by reusing assets or forcing your to retrace yourself several times. They try to con you into thinking you’re playing a Metroidvania, with special areas only accessible with new pieces of equipment, but they’re simply wasting your time. There are a number of really tedious parts in Escape Dead Island that you’re forced to trudge through far too many times, like a very long winding green corridor filled with debris you have to slowly duck under and a very long boring trek up and down a mountain. After making my way down that mountain for the fourth time at the end I was confronted by a pack of strong zombies and a “Butcher” zombie that was a boss character not an hour ago. They killed me, and where did the game put the checkpoint? Yes, right at the top of the mountain. Then when I finally got through that bit I was forced to go through the tutorial area again. F*** you, game. 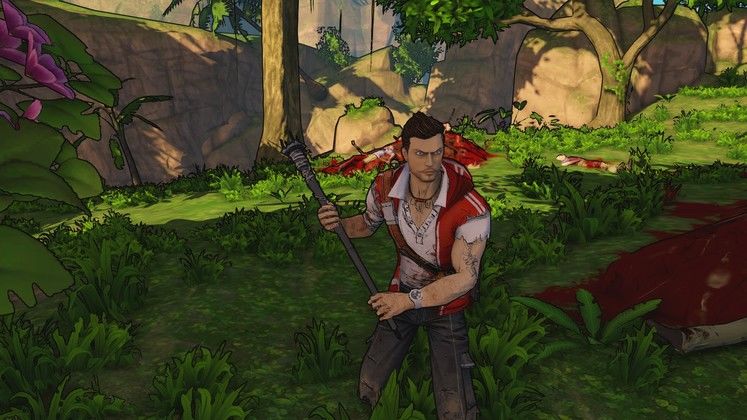 Oh yes, checkpoints can be monumentally badly placed. Before a boss character? Wrong, try several rooms and one of the few unskippable cutscenes earlier! Fancy a laundry list of things that annoyed me? You can’t jump off small ledges. Outdoor sections are small, indoor sections are terribly cramped. It commits the ancient videogame sin of having many identical useless doors and then doesn’t steer you properly towards the ones you can actually open - I once got lost because I hadn’t realised I could open a certain door because I’d already passed ten just like it. Audio log text takes up half the screen, and it’s the middle half so you can’t play the game and listen. There’s a moving elevator combat section, which I’d hoped had died out the same time as the side-scrolling beat-em-up. And so on.

The best word to describe Escape Dead Island is “cheap”. Certainly not cheap to buy, as I see it’s £34.99/$39.99 on Steam, but certainly cheaply and quickly made. The island of Narapela is quite small and painfully linear but the gameplay time is padded out by Fatshark forcing you to run through entire boring sections more than once, with added crappy checkpointing for good measure. It can be enjoyable in a basic, average way, and the “sanity effects” the game throws at you are the best reason to play it. All in all though I can’t think of a single reason you’d want to play Escape Dead Island over a thousand similar, better games on Steam. Most of them have zombies in them anyway.

Being hunted by a train. Seriously. 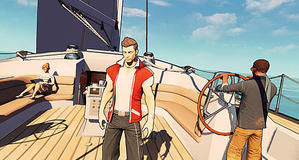