Suffer Not The Infidel To Live

Like most of EUIV’s expansions, Cradle of Civilization focuses most of its content to a region on the world map, instead of bringing a wealth of global features. Some of the content is free for all players of EUIV, such as the new playable nations, however the true meat is only available for those who buy the expansion pack itself. This time around, it’s the Middle East and North-eastern Africa that get the attention, with new government types and various mechanics.

To get the best grasp on the content of Cradle of Civilization, you’ll have to pick one of the focus nations, or you’ll only encounter the new mechanics indirectly and later on in the game. If you’re playing as England, chances are the intricacies of how the various schools of Islam relate to one another won’t be a major concern. Several new nations were added with the expansion, as well as map updates for the sake of historical realism. 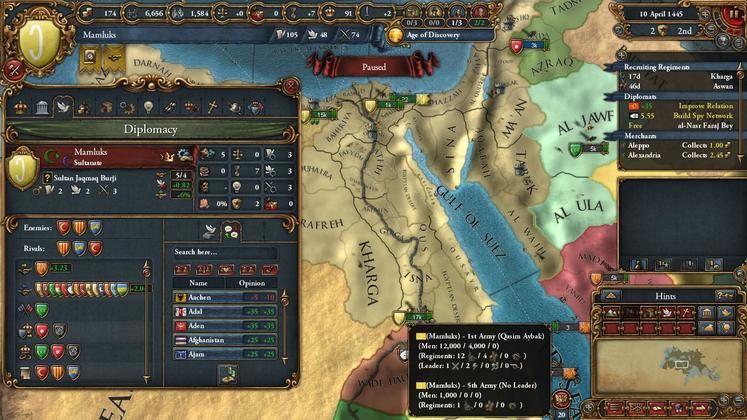 Egypt begins the game with a huge amount of territory.

The Egyptian Mamluks, Persia and the remnants of the Timurids are the three arguably most interesting among the new countries, with Egypt upending the previous balance the most. The Mamluk kingdom starts the game (when playing at the earlies possible date) as the second strongest nation in the world, and offers a serious threat to the Ottomans who were previously considered to be one of the most advantageous nations to play as.

When starting off with a Middle Eastern nation, most if not all of your neighbours will have Islam as their religion, which is where one of the new diplomatic features come into play. Each nation subscribes to a school of Islam, and the many different schools relate to one another differently, affecting the opinion metric of other nations. Sharing school will be a bonus to opinion, but having differing schools doesn’t automatically mean a negative – some schools relate well to one another while others are more hostile.

Conquering a nation, or getting them to be your vassal through other means, will not automatically impose your school of Islam on the region. It will be your task to convert the people of the new area, and this conversion rests on a number of stats, such as how much the two schools differ. You can attempt conversion even if the area in question isn’t under your control, however this makes things more difficult. 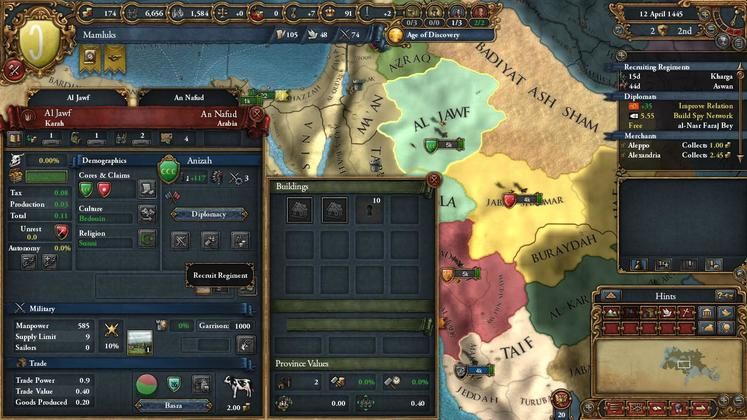 Your given school isn’t just a modifier affecting diplomacy, as each school brings with it its own stat modifiers, providing benefits and drawbacks. These are usually focused around trade, but many different aspects of governance are affected by various schools. You can also call scholars of other schools to your nation for conferences, which also has its perks.

There is a whole lot of diplomatic fluff added to Islam, and the new system also make the decision between Mysticism and Legalism more important, but most of these new mechanics are interwoven and best experienced first-hand. They certainly add several layers of depth, and make playing as a Middle Eastern country a whole lot more interesting, challenging and eventful than it was before, which was the goal of this expansion, after all.

However, one of Cradle of Civilization’s most impactful changes can be found among those very few new features that affect all nations. Two new military mechanics, Army Professionalism and Drilling have been added to further deepen army management. Drilling is a modifier which requires you to keep your soldiers on their toes. If they’ve completed military drills, they will gain certain buffs that decay over time and can be maintained by, you guessed it, more drilling. Drilling also goes towards your Professionalism stat, which can bring some significant buffs and stat changes. 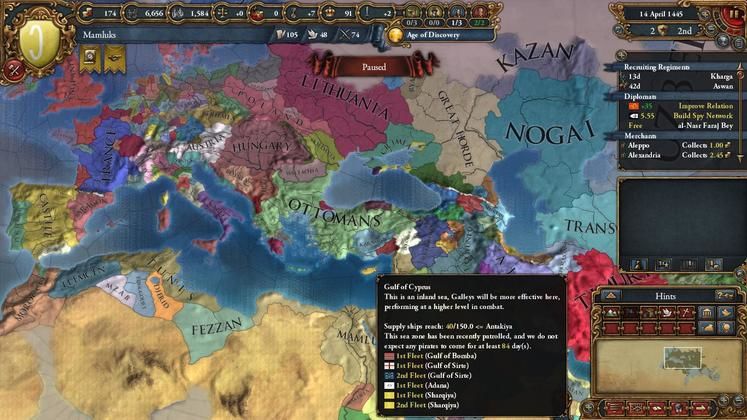 Playing as the Ottomans isn’t the cakewalk it used to be.

As with all expansions, Cradle of Civilization also adds a whole lot of new events and scenarios which randomly trigger during play to break up the monotony somewhat, and in spite of the central theme not all of them are directly tied to religion this time around. Overall, this newest expansion packs enough new content to be worth its price, provided you’re interested in playing as a Muslim nation.

As with all region-focused expansions for Europa Universalis IV, the first question you need to ask is whether you want to play as a nation from said region, because If not, you should look at another expansion instead. However, for those interested in playing as Muslim nations, Cradle of Civilization has plenty of new mechanics, features and events to make it worth your time and money.

After failing horriby at governing Mamlukean Egypt, I restarted and now having gotten used to the new mechanics, was off to a good start. After lengthy planning, northward expansion and constant harassment of the Ottomans and their allies, I was finally ready to unleash my massive army upon my biggest rival. That feeling of “now I have you” surpassed even my eventual (inevitable, if I dare say so myself) victory. 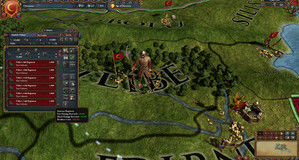