Running with the shadows of the night 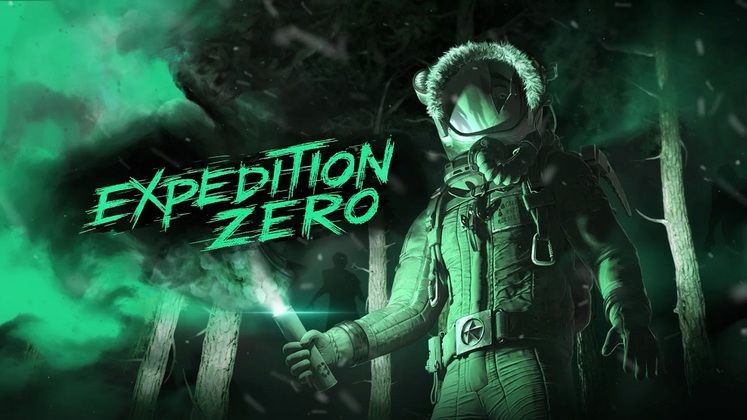 TinyBuild has made a name for itself by giving smaller companies a chance, and it’s easy to appreciate that. It’s possible that games like Kill It With Fire or Not for Broadcast would have faded into obscurity without them. TinyBuild has now published Enigmatic Machine’s Expedition Zero: a survival horror game set in rural Serbia. This might seem familiar if you’re fond of that Eastern European approach to the genre like Pathologic, Chernobylite, and STALKER. Whilst this game has some unique ideas up its sleeves, Expedition Zero’s more frustrating elements get in the way.

The basic story is that you are trapped in an anomaly zone in Serbia as the last survivor of the aforementioned Expedition Zero. A plague has been caused by the strange going-ons and it seems the only way to get out is to try and cure the plague in the walls. Zombies and mutants abound, it’s up to you to collect samples for a mysterious man hidden behind a curtain. Like other horror games, a lot of what’s happening is found out by finding notes in abandoned buildings and the like. Research notes, letters, all that good stuff. It’s not bad, but it’s very easy to ignore. Not so much with your missions.

The main goal is to find samples of the virus throughout the forests, using your locator to track them. While the horror falls flat more often than not, these sample locations add an unnerving surrealism that’s appreciated. Vines tangling under a church, an Elk glowing that’s too hard to kill, what’s left of a human in a vat, it’s where the horror is at its strongest. That horror goes away fast though thanks to the game’s absolute joy in killing you constantly. 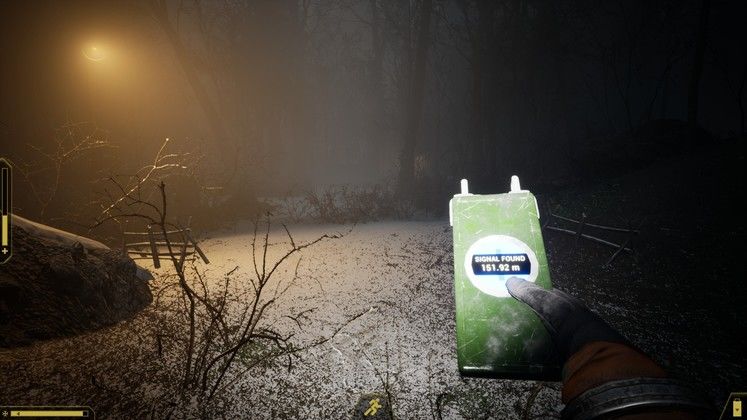 "Man, I sure hope a bunch of monsters don’t eat my face."

One example is at the start of the game, where that man behind the curtain requests for you to meet him by the walls of the anomaly zone. This area is guarded by massive spotlights and getting caught in them gets you shot to death. It’s pretty quick too, two shots and game over. This is in the first 5-10 minutes and it quickly colors the whole experience. Sneaking past them to meet your client isn’t impossible, but it’s not a fun first impression. This is telling you “hey, this is gonna feel unfair. Are you gonna chicken out or will you prove me wrong?”. It’s going to get worse from there.

Like plenty of other games with this style, scavenging for materials is a must. Looking through trash and broken appliances lets you find parts to break down to make new items and modules. You start with a head-mounted flashlight, but this can turn to modules to stay warm, gas masks, and more inventory items. 3D printers are all across the zone, letting you build something when you have the time. Some of these modules take battery power from your suit, requiring you to charge it up to stay alive for longer.

But the biggest issue with these is that each printer has a separate upgrade. For instance, an abandoned church has a blueprint for that upgrade to deal with the cold.This blueprint can’t be taken with you to your shelter, it’ll have to be made there. So if you don’t have the materials for it, better find them and go all the way back to that printer OR hope you find another printer with the same blueprint. It’s a hassle, but it’s a greater tension than when the monsters come out. 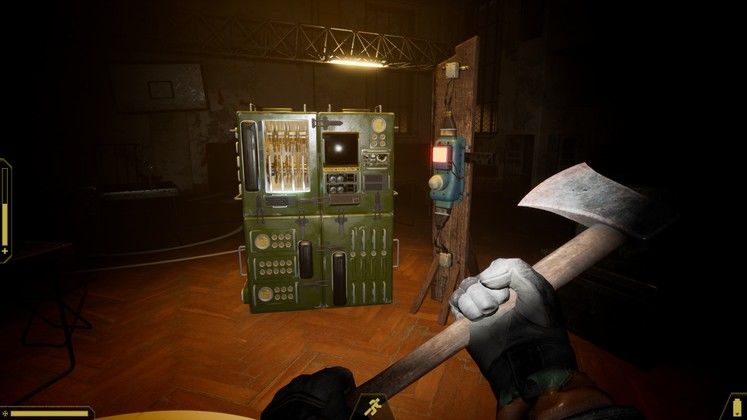 Each printer has a separate upgrade, meaning you can only build things at certain printers.

Before you meet one of these monsters, your biggest foe will be the cold. Survival is the name of the game, and it’s easy to slowly freeze to death. The only way to solve this is by either traveling back to your shelter, going to a location without subzero temperature, or burning wood in the stoves littered across the countryside. Finding a bit of wood to burn can make all the difference, and getting warmed up adds to that tension. Was that the right time to warm up? Should I have saved it and just rushed to shelter? But after a while, it gets easy to understand and deal with. Then the monsters come.

You will hear screams at night and they will always be louder than expected. Before you properly see them, this is where the monsters are at their best. It’s easy to jump at first, but you grow accustomed to them. Those scares are quickly replaced by a tedious sort of unfairness that comes from monsters. There are zombies with axes, flies buzzing around them as they charge at you. These are ones you can learn to fight against, trading blows with an axe or crowbar. But this doesn’t prepare you for the monsters that’ll give you the most problems.

The main monsters that are your bane are over-powered. They’re beasts that jump around trees, release poisonous gasses, screw with the game’s interface, grab you with their tongue and can even instakill you if your health is low enough. Even if you’re running away, they’ll just pounce and kill you in a gratuitous cutscene. The distance itself seems superfluous as to where they’ll take you out. That by itself isn’t surprising, plenty of games have done these relentless pursuers, but few of them felt this relentless and cheap. So relentless that the thing’s tongue clipped through buildings to attack without warning in one build of the game. There’s a reason why the Smoker and Hunter in Left 4 Dead wasn’t made into a single class. 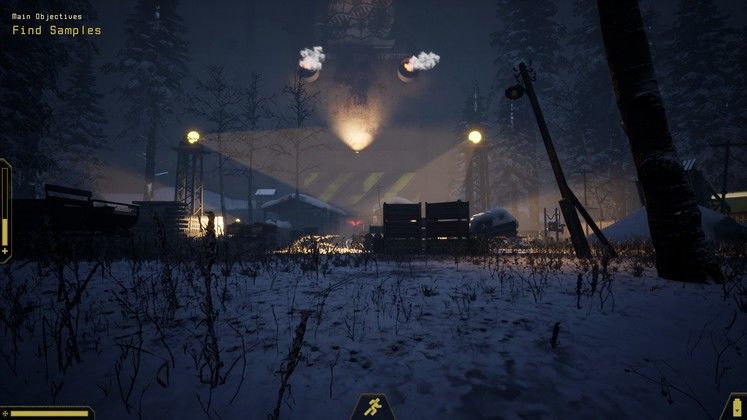 It always feels like you’re doing something wrong, and the solution isn’t clear. Fleeing is nonoptimal, and fighting it doesn’t even buy you enough time before they return. No matter what you do, you’re going to lose health. There is one module for your suit you can get to tell you when an attack is imminent, and that can help when you’re facing a single monster. But later samples have you face multiple pouncing beasts and facing them all makes the game a slog. It’s the worst sort of frustrating, the type that makes you walk away and turn the damn thing off. In a game where you’re trapped in a land with a dangerous, alien plague, it’s disappointing that the biggest problem you face is a tree-hopping pouncer who screams in your face and eats you.

Even when the game gets patched to deal with more egregious issues, Expedition Zero would be a lot better without this combat. It’s at its strongest when your biggest enemy is the weather, trying to find out what’s happened, and finding samples in the strangest of places. When you’re stalked by monsters, it’s tiring. It’s not the sort of trauma that makes you stronger from the experience. It just burns you out and prevents you from appreciating the game’s bright spots. 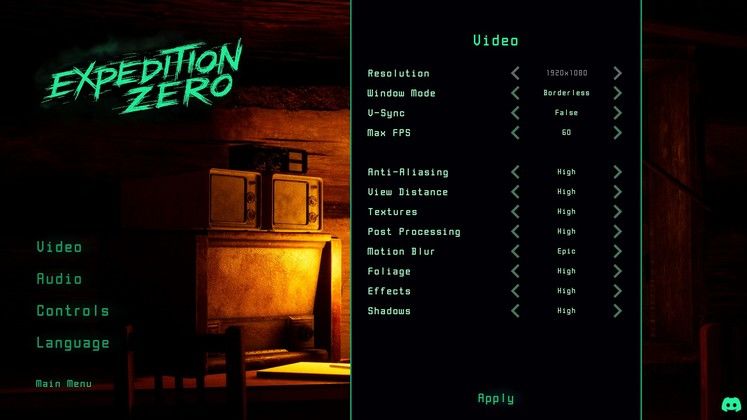 To show how easy it is to run Expedition Zero, the game’s minimum requirements include Windows 7. This means that if you’ve got an ok computer you should run it without issue. Pop-in is common, especially in higher graphics, but nothing game-breaking. Expedition Zero isn’t a big budget title and it shows, but the way that some corners are cut is pretty ingenious. The trader you first meet in the game is a great example. You only see his hands, the rest of his body covered by a curtain. It’s a fun way to animate a character without attempting to lipsync a performance. These little touches amplify the game’s better moments. It’s not the prettiest game on the market, but how it looks and runs isn’t one of Exhibition Zero’s problems. 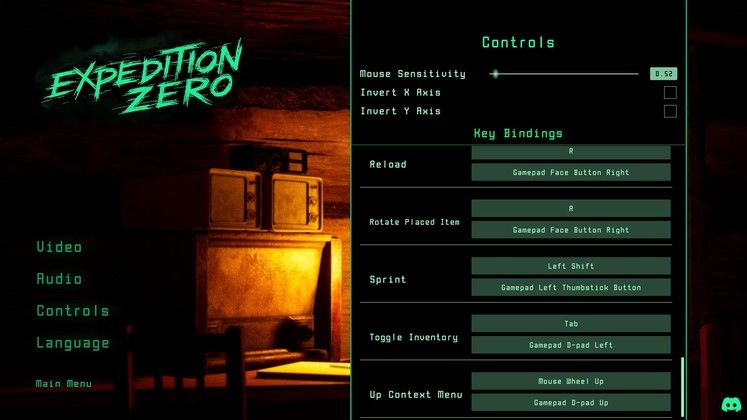 While that’s not surprising for a smaller title, Expedition Zero’s only accessibility options are its control mapping. Not only that, but its lack of a difficulty slider won’t make it for everyone too. This isn’t an egregious case since there aren’t any mechanics that require button mashing, but its heavy focus on scavenging without highlights might be tricky for those with vision problems.

When Expedition Zero is at its best, it’s a tense battle against the elements as you scavenge and try to get out of the surreal zone. At its worst, it’s getting killed by annoying monsters. Unfortunately, you do more of the latter, making it more frustrating than scary. If Expedition Zero still interests you with its problems, get ready to grit your teeth. 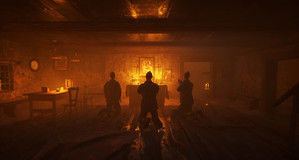