Welcome to the New World

Now this is a game that surprised me. The internet is a big place and sometimes projects like Expeditions: Conquistador can get made and the first you hear about it is when review code gets plonked in front of you. A cursory glance at the website suggests a game that’s very reminiscent of King’s Bounty, or Might & Magic – real time exploration mixed with turn-based tactical battles, with some role-playing elements thrown in for good measure. Instead of fantasy lands and mythical creatures however, you’re thrown into the more down-to-earth (but just as mysterious) 16th Century ‘New World’, or present day Mexico.

It seemed interesting enough at first glance, but what I wasn’t expecting was how compelling it was going to turn out to be. Conquistador can easily take 10-15 hours from you before you even realise what’s going on, and there’s plenty of content to sink your teeth into. As the name suggests, you take the role of a Spanish Conquistador putting together and expedition to the New World. There are two campaigns – Hispaniola, which is like an introductory campaign, and then the mainland of Mexico itself. For new players, you have to complete Hispaniola before you can move to the mainland.


You’ll spend most of your time roaming around the game world, or ‘strategic’ view for the sake of clarity. You have your avatar, which represents your party or expedition, and you can roam the countryside on your quest for fame and fortune. It’s not exactly turn-based, but you avatar only has a certain number of ‘moves’ he can make in one go before you have to make camp and rest for the night. You move faster on roads then you do in jungle or up in the mountains, and you can replenish your moves if you happen to find a fresh water spring or pool. Along your travels you’ll find chests, herbs, meat, resources and the odd enemy wishing to take all your things. Once your moves have run out, you need to make camp.

This is one of the most unique features of the game – Conquistadors has a really good ‘frontier’ element to it, something that I’ve not really seen captured as well in other games. You’ve got to keep your expedition fed with rations, and you need medicine to heal their wounds. You can also collect resources for the limited amount of crafting the game offers. You have to assign a task to each task member –the three primary tasks are Guarding, Patrolling and Hunting. Guarding protects your camp from theft, random attacks and so on... Patrolling sends your troops out into the wilderness to hunt for resources, and Hunting is about gathering food. You can buy rations at towns, but if you manage to find enough meat, you don’t have to eat into your reserves. Any excess meat can also be turned into more rations. Your location and how many people you put to the primary tasks will dictate their success, which can be monitored by a simple percentage meter. There are also other tasks though that may need doing which will detract from the primary tasks. If a solider is injured, they are unable to do anything, and further to that you need to assign a Doctor to make sure they are healing. Healing needs medicine, and you can convert herbs you find on the road into medicine. Depending on where you make camp (or certain quests), there may be some contextual tasks you can assign to someone. Also, someone can be assigned to ‘Tinker’ – essentially making equipment or traps for the battles, or researching better equipment for traveling. You need to keep all these things in balance when exploring the world and camping every night – if you run out of rations your troops will lose morale, even desert.

Before you even begin to worry about all this though, you have to choose the composition of your party. You can recruit more people in-game (both European and Native), but initially you start off with 10. These can be from any of the five classes available: Scout, Hunter, Soldier, Doctor & Scholar. There are additional classes – many of the ‘native’ characters you can recruit have their own versions of classes, but as far as the initial European set goes these are your only options. Each class has certain strengths and weakness, both inside and outside of combat. Scouts, for example, are really good mêlée characters, but can’t use ranged weapons and don’t have as good defence. Hunters are great with bow or with gun, but are weak in mêlée, and so on. Doctors and Scholars are more support characters, with special buffs and abilities to help your other expedition members fight.


There’s a real meaning in choosing who you take as well, as every single character has personality traits that will define how they react to your actions – racist vs. open-minded, altruistic vs greedy and so on… you really have to think how you’re going to play in general beforehand, and pick a team that fits best with your ideology. If you do something contrary to what a character believes, they will lose morale. If you do something they agree with though, they’ll gain morale.

Fighting isn’t as common as you might think in Conquistador’s, but every time you do fight it feels natural. When travelling and camping out in the wilderness, you can be attacked by natives or rogue Europeans. Depending on how you play, you can also lay waste to native villages, and of course through-out the course of the various quests, you’ll often find yourself fighting your way through to an objective. The game renders the local environment superbly – if your camp is under attack, your troops are literally in the middle of the camp trying to defend themselves – if you’re attacking villages, or defending a town, same thing... the environments are all varied and different, unified only by the fact that the space is divided into tiles, and that everything is turn based.

Typically, you can take six of your party into a battle (bar plot events or other negative modifiers). Each class has five ranks – recruit, men-at-arms, veteran, sergeant & Lieutenant. You spend experience points to level characters up, and the higher the rank, the more abilities/stronger they are. You can only ever have two sergeants and one Lieutenant at a time, however. On the battlefield, everyone can choose to either move a bit, and then do an action, or they can move a lot and do no action. If you’re trying to play catch-up, the latter can be useful to gain ground quickly, but it stops you being able to do anything when you get there. Everyone can attack normally with their weapons, but using abilities helps you get a vital edge. Ranged weapons need line-of-site for maximum effectiveness.


For all its depth and the ability to bring out the explorer in all who play it, there’s something about Conquistador that ends up bugging you. Some of it is little things, like the move allotment being a bit too low, and there not being enough interaction with the world, but there’s also the way the game is structured. Having an initial ‘introductory’ area was a good idea, but you spend so long there that by the time you get to the mainland, you can’t help but feel there’s just more of the same waiting for you. It’s worth persevering – there are some very interesting quests (both main and side) for you to find, but eventually the day-to-day stuff gets a bit tiresome. Plus there’s no way we’ve discovered so far to fast-heal everyone in locations where it would make sense. If you get a bad combination of events, it’s essentially game over for you as you probably won’t have enough doctors to stop you losing some people, and once they’re gone they’re gone. Still, these are relatively minor niggles, and hopefully Conquistadors gets enough support for them to iron out the game a bit.

All in all, Conquistadors is a pretty solid game – the New World is full of wonder and danger, and there’s just enough RPG in the mix to make you feel like a real explorer, dealing with realistic problems. As we mentioned above, there could be a bit more to do, and a few other niggles, but at the price they’re asking for at the moment, this is definitely worth your money and something you should try out. With a little extra work, this could turn into something great.

Hard to say - when exploring and surviving is new to you, it adds a certain edge to everything that’s quite exhilarating.

Hard to say - when exploring and surviving is new to you, it adds a certain edge to everything that’s quite exhilarating. 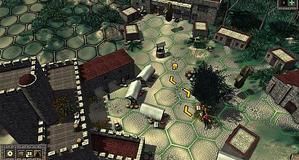