Huzzah! I found another one! 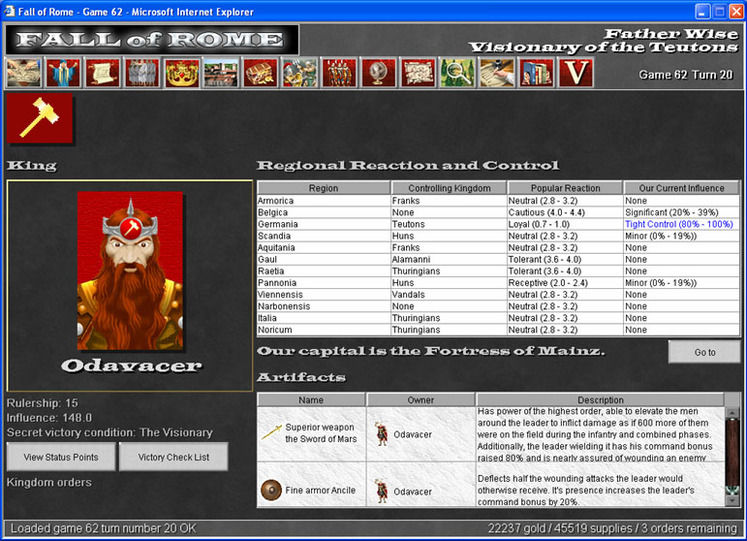 You play Fall of Rome on a map of Dark Ages Europe, just you and eleven other players, each situated in a large region that you must struggle to control by the second or third turn. The game software - or GUI - shows your region in sumptuous color, with nice icons and the ability to see the world in three views: tactical (a single hex), operational (a region-sized area), or strategic (a geographic or political view of the entire map). You'll spend most of the game in regional view, where you can issue orders to your forces with a few mouse clicks. When I first saw the game, it was the GUI that got me. It is one of the slickest pieces of on-line game software I've ever seen. Using the GUI, I can enter my orders within minutes, and I get instant feedback on whether my orders are legal.

Issuing orders may be simple, technically, but deciding what orders to issue is quite the challenge. You're given a set number of orders each turn - typically 13-16, depending on your actions in the game. It's never enough. All you economics students out there will remember that when there's scarcity, there's opportunity cost. Allocating one of your precious orders to move your Prince into position to usurp control over an enemy town might mean that you won't have an order available to recon that town or to order a patrol to scout the area around it. I love games that force me to make hard choices. It gives a game replay value.

And you don't have forever to make your choices. Every three days, the game is 'closed' for a short time while the server processes the orders submitted by all the players. The game then reloads itself automatically so you can view the victory won by your stunning tactical maneuver on the battlefield - or its dismal failure. 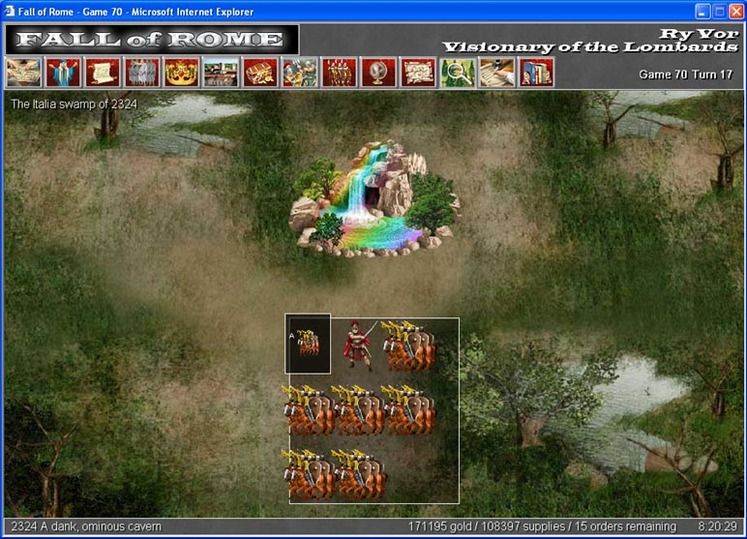 You don't have much leeway for poor choices, either. Players can attack other players on the second turn. By the third or fourth turn, someone is almost always attacking someone else. The average game lasts 24 turns, or about two months of real-time, and can end sooner if a player meets his victory conditions quickly. You can even choose your general victory conditions. You might, for instance, choose to become the Rex, a mighty conqueror, or perhaps the Visionary, a mighty builder, or maybe something else entirely. Various achievements in the game yield status points, essential in themselves for victory. 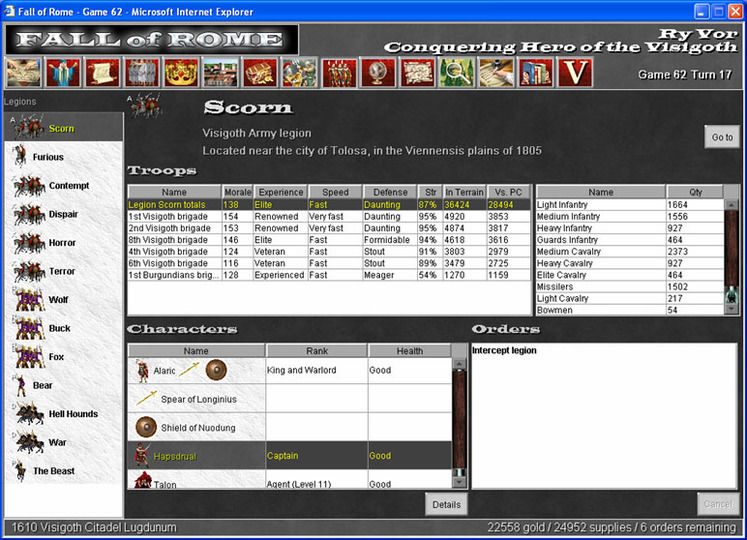 Mastering the economic model is essential for success in Fall of Rome, but it doesn't get in the way of you enjoying the game. In 200 words or less, here's how to master the economic model: If you need gold, conquer towns. If you need supplies, conquer villages. If you need lots of gold, conquer cities; but remember cities consume lots of supplies. Once you've conquered some population centers (PCs), start building improvements in them. Supplies running low? Build storehouses in your villages. Need more gold? Build markets.

The neat thing about improvements is their symbiotic effects. You can increase supply production with either a storehouse or a mill. But if you build both in the same PC, each of them produces more. Some improvements, such as a market, can lower the defense or counter-espionage level of your PC. Others raise them. Of course, building improvements takes orders. And orders are scarcer than gold or supplies. You have to choose the best improvements to build, and the best places to build them. See? There's that choice thing again...

Additionally, you can trade gold for supplies, or vice-versa, in the open market. Each turn, the exchange ratio of the market fluctuates based on current supply and demand. The market makes sense when you have a disproportionate amount of one resource over the other. 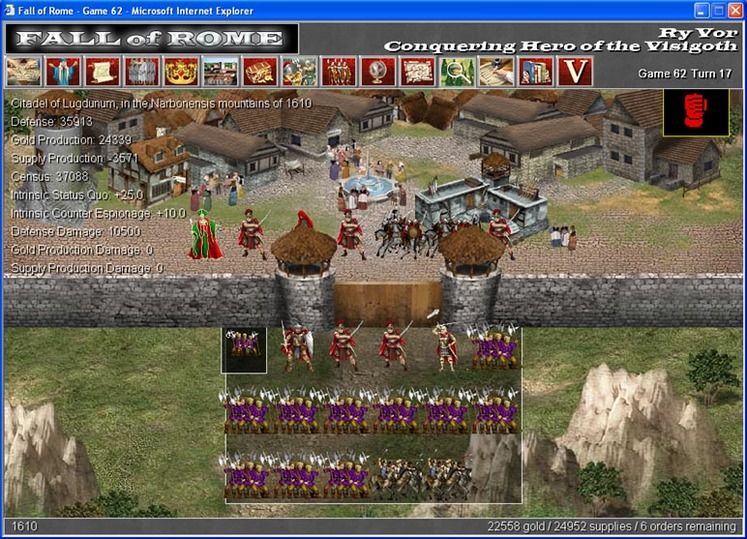 You start the game with a court of nobles running the gamut from Prince to lowly Ambassador. Their chief purpose is to capture PCs in bloodless political coups (or to help you prevent the capture of your PCs from enemy nobles). Each noble has power equal to a percentage of your king's influence. Their power, along with other factors such as the resistance level of the PC and the regional reaction to your King, determine their success in carrying out their orders.

Sound complicated? It's not, really. A serious player might try to determine the various factors and then calculate his chances for success, but most times, you just draw a bead and let fly.

For example, I know that if I send my Prince and my Count to the (single) city in my region on the first turn, then they will have enough power to usurp control on the second turn. Unless, of course, another player sends one of his nobles to the city to maintain status quo. Or perhaps denigrates my region, making it harder for my nobles to carry out their orders. 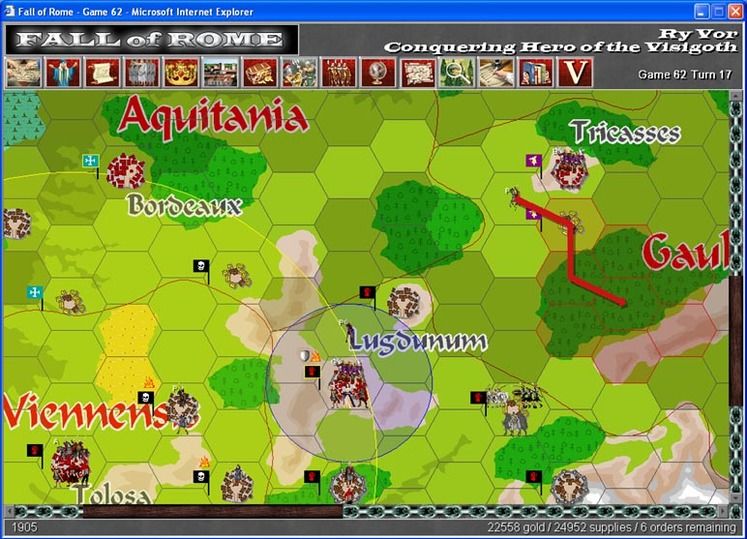 The Fall of Rome message board is integrated right into the GUI. It lets you send messages to other players without ever knowing their real names. The message board is slick, but I like communicating by e-mail so I have a permanent record of my brilliant negotiations, and so I don't have to fire up the GUI whenever I want to read or send a message. Still, the message board is undeniably convenient for rapid diplomacy, and I use it all the time.

The rich political system in Fall of Rome makes the game so much more than a simple movement of armies into battle. Of course, it's best to have a strong court and a strong army. Some players try for both; others focus on one or the other. I never skimp on politics. How glorious to watch my enemy send his military juggernaut into battle only to look back and see that many of his town and villages have fallen to the clever words of my nobles! 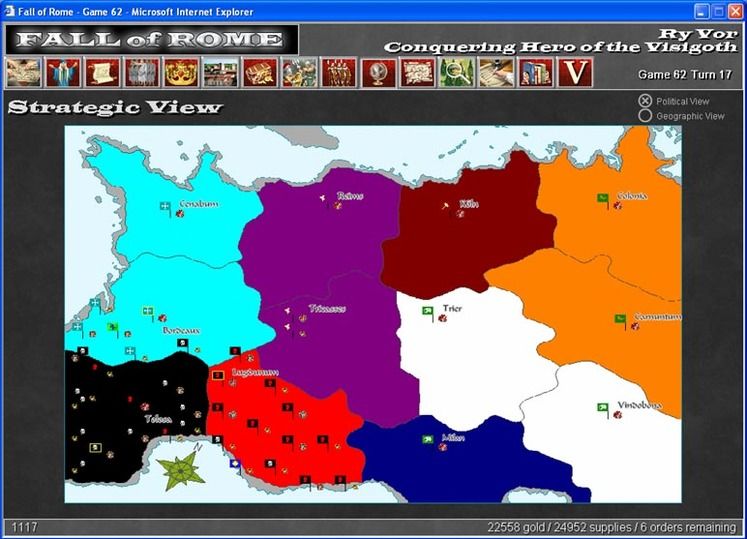 If you're still waffling, go to the Web site

Fall of Rome is immersive and addictive gameplay at its finest. The designer says that the game, especially the GUI, is a ‘5 alarm breakthrough’. I thought about being the wet blanket and saying that it’s only a ‘4.9 alarm breakthrough’. Just then, the fifth alarm went off. 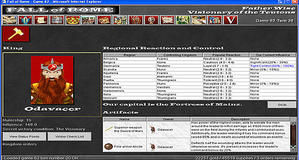