Welcome to the next 100+ hours of your life. Bring Purified Water and clean non-radioactive underwear

I haven’t completely finished The Witcher 3, barely started Pillars of Eternity, haven’t begun Wasteland 2, stalled in Divinity: Original Sin, and on the bright side I’m completely done with Dragon Age: Inquisition… but now Fallout 4 is here, and potential divorce proceedings are hanging over my head once again. Prepare to return to the Wasteland peeps, and I suggest cutting out all that pesky sleep because you’re going to need the time if you want to finish it. The question is though, is Fallout 4 worthy of your time? I’m glad you asked…

Welcome to the next 100+ hours of your life. Bring Purified Water and clean non-radioactive underwear.

Keeping things basic with the story, your character starts in Pre-War America just before the bombs fell. Fortunately you and your family have an invitation to the local Vault and make it to Vault 111 just before civilization is annihilated. From there things get only worse for you. You’re cryogenically frozen, woken up 200 years later, and your son has been stolen. You have to survive the Commonwealth Wasteland, make allies (or don’t), and get him back at all costs.

The story is okay, certainly better than Fallout 3 but in my opinion not as strong as New Vegas or even Skyrim, although as usual in Bethesda games its main job is just to move you around the world to experience everything the game has to offer. Unfortunately the way Bethesda does this completely ruins their own central narrative. Any parent would literally stop at nothing until they find their child, but the Vault Dweller forgets about his son immediately after leaving Vault 111. You can’t even ask the first group of people you meet about him, but you’re totally happy to single-handedly fend off raiders, build a community and plant carrots for them instead. Many open world games struggle to keep the relevance of their dramatic central story and still allow room for all their many silly diversions, but Fallout 4 is probably the worst attempt at reconciling the two that I’ve ever seen. 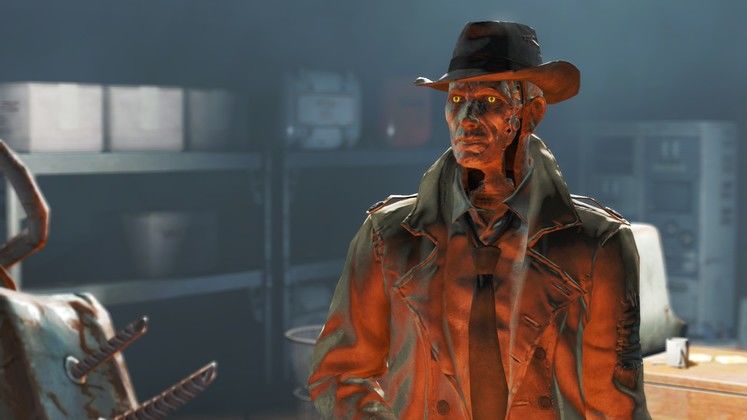 Fortunately you’re probably not playing a Fallout game for its story. The general dialogue is pretty good and there are some great characters like synthetic private detective Nick Valentine, but Obsidian’s New Vegas still wipes the floor with any of Bethesda’s efforts in either department. Making compelling characters, snappy dialogue and engrossing storylines just aren’t things Bethesda are good at despite their best efforts, and so consequently the companion with the most personality is still Dogmeat. Bethesda have clearly put a lot of effort into making him cute and really useful this time, so I bet a lot of players will fall in love with the little guy and stick with him the entire game. Sod the Super Mutant who quotes Macbeth.

Bethesda’s real forte is in world building, specifically making a fun place to explore. They haven’t lost the knack, as the Commonwealth is just as entertaining to check out as the Capital Wasteland and a mite more believable. The way the area is laid out feels more real, the city of Boston at the centre with just the right amount of clutter. It’s still not a patch on New Vegas but the reason why a lot of people prefer Bethesda’s efforts is that they sacrifice realism in favour of keeping the player interested. There is always something new to discover within sight, or another layer to a location, or a quest to stumble into. You’ll occasionally even wander into a firefight or hear the sounds of gunfire in the distance and can decide whether to run to the danger or not. 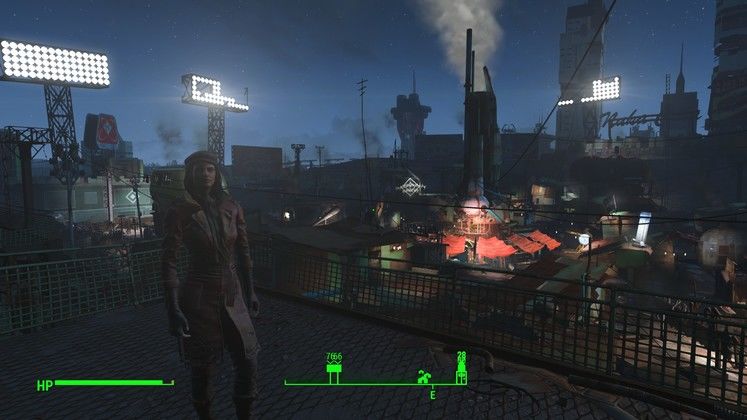 Diamond City, in the rough.

It’s the little things to discover that make the world so compelling, such a skeleton in bed with the tree that killed him still on top of him, or sillier quirks like a teddybear sitting on a toilet reading a magazine. Bethesda aren’t masters of words but they’re great at visual storytelling. Nonetheless I do like how NPCs will react differently to you depending on what you’ve done for them, and might comment on what you’re wearing. Companions will even talk to you more depending on how much they like your actions. Little things, but they make Fallout 4 feel a more satisfying place to live than many other open-world titles.

Yes, there is a “but” coming to all this. Butall these little fun things aside, Fallout 4 really really just feels like a modded Fallout 3. Every single moment of the gameplay feels like Fallout 3. The gunplay and exploration works the same. The VATS aiming system and AP points work exactly the same. The areas have better textures but otherwise look the same. The creatures are all the same. Lockpicking and hacking are the same. Everything you do while exploring or shooting, I’d say as much as 90% of Fallout 4, feels exactly like its predecessor. If you play in Medium graphics settings you’ll probably have to check to make sure you didn’t install Fallout 3 by mistake. 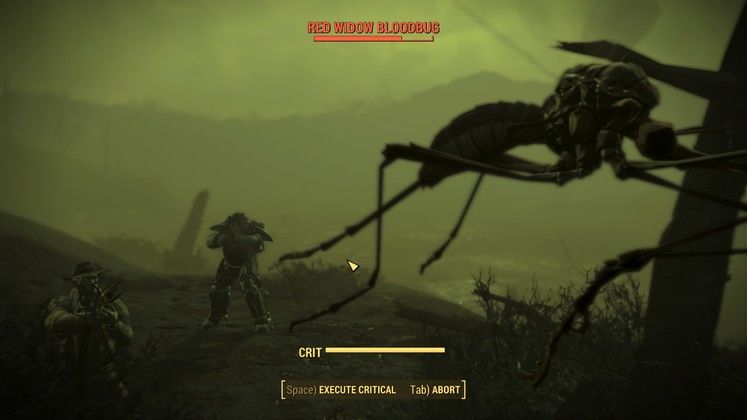 This is not necessarily a bad thing as Fallout 3 is a very great game and everything in it still works very well, but I’m old-school in that I want a numbered entry to a series to offer more than just a slight graphical facelift. Most importantly though, Bethesda haven’t fixed any of problems in Fallout 3. Inventories are still a boring alphabetical list of items, and when you go to trade things you’ll literally be presented with a gigantic list of every single item in your inventory. The menus (and Pip Boy in general) are still pretty clunky and unhelpful, and the map screen is something I don’t think Bethesda will ever get right. Interior areas still require loading screens, and characters still disappear pathetically while transitioning. Companions still get in the way or block you, and I lost count of the times Dogmeat actually got me killed. Third-person is still terrible. And more. If you can name something you didn’t like about Fallout 3 it’s probably still here.

There are a few new additions to the gameplay which are pretty much mods, but they’re welcome nonetheless. The first is the inclusion of Outposts that you can customise whatever way you choose, protect with turrets, fences, guard posts etc, and help keep residents happy. You can ignore this part of the game entirely, but it’s nice to have a base of operations where you can always find upgrade stations. Oh yes, there are Weapon, Armour, and Power Suit upgrade stations now where you can customize and mod all your important items, and yes - the Power Suit isn’t just a powerful bit of apparel anymore. It be changed, repaired, upgraded, and requires a Fusion Core to run, and is basically a mini-Mech suit. The ability to cook food is cool too. They’re all minor additions but they’re welcome, despite the game not explaining how to do any of this very well. I’m still not sure how to easily turn Junk into Components. 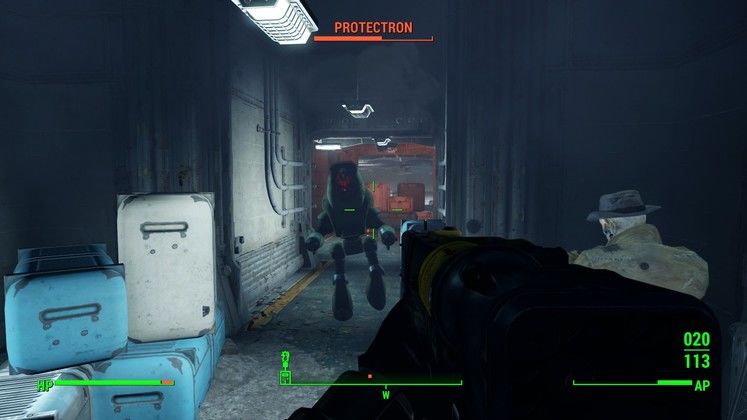 Graphically Fallout 4 isn’t the sharpest game in the next-gen box, but the Wasteland still looks fairly pretty on High and even in Ultra runs really well on my aging PC (Intel i5-4670 CPU @ 3.40GHz 4 CPUs, 8Gb RAM, and an NVIDIA GeForce GTX 660 with 2Gb RAM), and there are still lots of little artistic details that make places like Diamond City or the Glowing Sea look gorgeous. However just like Bethesda’s other games (probably because of the hated GameBryo engine) character models still look stiff and lifeless, with the exception of characters who are meant to be stiff and lifeless like Nick Valentine, Synths, and Brotherhood of Steel soldiers. Talking specifically about the PC version the controls are badly optimized - Escape doesn’t leave menus, I’ve no idea how to scroll between items when scavenging without opening the whole Transfer menu, getting round the Pip Boy menus is clunky, the button for Melee Attack is the same as Throw Grenade, these sorts of things. Oh, and I hope there’s a Day 1 patch that actually allows you to alter graphics settings within the game…

Fallout 4 is a superb game, with a huge and compelling game-world to explore, entertaining combat, and many quests that’ll keep gamers hooked for over a hundred hours of single-player-only fun. Yes the story is literally forgotten the moment you leave it (what son?), but other than that everything great about Fallout 3 is back in the sequel… which is both a blessing and a curse. It really does feel like Fallout 3 with slightly nicer graphics and a few mods (like “homebase customization”) thrown in, and while Fallout 4 has everything that made the last game great it has all the weaknesses too, like a terrible inventory menu, stiff character models, interior locations requiring loading screens, and more. Fallout 4 is an amazing game that I doubt anyone will be disappointed by, but it’s not unique. And I still prefer New Vegas.

It’ll be different for everyone and I don’t want to spoil anything, but venturing into the Glowing Sea in Fallout 1-style Power Armour and sending a Deathclaw fleeing in terror did it for me.