The Dawn of Meh

If you know Daedalic, and I do, you’ll be aware that for a small and mostly adventure-focused publisher their line-up is decidedly mixed. While The Night of the Rabbit, their two The Dark Eye adventures and The Whispered World are all pretty good, Journey of a Roach was dull, Randal’s Monday was fun but had terrible puzzle design, and the Deponia trilogy is one of the worst crimes ever committed upon videogaming. Every game from the Daedalic stable therefore is a flip of a coin. Is newcomer Fire heads or tails? Read on to find out.

The Dawn of Meh.

The story of Fire is told without any dialogue at all, much like fellow Daedalic adventure Journey of a Roach or the much better example, Amanita Design’s Machinarium. Set in neanderthal times, main character Ungh the caveman is thrown out of his village after letting their first fire go out. He then has a trippy and disturbingly religious encounter with a talking tree who sends him after strange glowworms with the power to send him to different times and places, where he goes in search of a burning bush to please his tribe.

There are many reasons not to play Fire, and one of those is the story. While there are minor “twists” that I won’t spoil (despite being given away on the Daedalic website) this is not an adventure game you play for the dialogue or plot, because you won’t find either in Fire. Machinarium managed to tell a story without dialogue, as does Shaun The Sheep for that matter, but Fire doesn’t bother. This isn’t a problem really, so long as the rest of the game makes up for this. 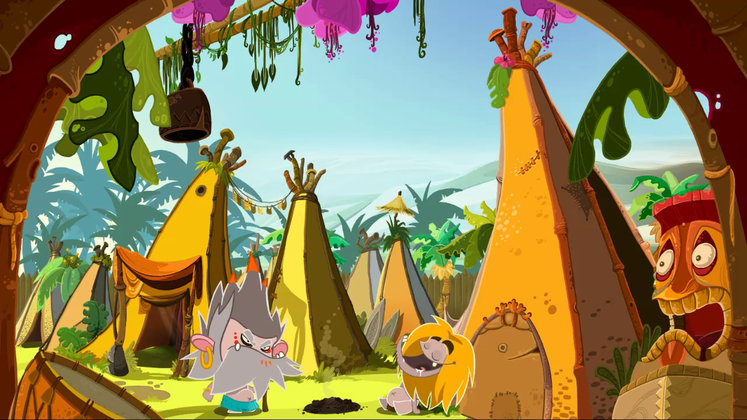 The Dawn of Idiocy

The big problem with Fire isn’t the story, it’s that it’s been designed in an exceedingly basic and, dare I say it, iPad-friendly way (funny then that it’s not actually on tablets). The player can’t move Ungh directly, they just click on the 1-4 points of interest on each screen and he does something automatically, or click on the arrows at the bottom of the screen to move him to another area. It’s so incredibly basic that it turns every puzzle into less a matter of thinking than a click-fest until something happens. It’s deeply unsatisfying.

Which is annoying, because some of the puzzles can be quite fun. One music-based puzzle for example is almost Sesame Street-like and is actually entertaining, and another where you have to transform Ungh into various animals to proceed is amusing. Indeed, all of Fire is quite sweet and wacky, so it’s hard to have too much of a go at it. I’ll try my best though, since the music puzzle is ruined by having a key piece of the puzzle hidden unless you do something totally unrelated, at which point you can magically just click on the item and it falls down. The internal logic of the game is totally frustrating - sometimes the problem is that Ungh can’t reach an item, but other times the player can just grab things for him anyway. Even if I were to write Fire off as a kid’s game, kids still deserve consistency with their gaming. Heck, I’m pretty sure six-year-olds are less forgiving of this type of rule-making-up than older gamers.

The pains in the arse continue with the inability to save or the total absence of any kind of hints. The lack of a save system is particularly annoying. The game “checkpoints” between areas, and if you know what you’re doing none of the areas last very long admittedly, but that’s all irrelevent - it’s an adventure game! I want to f***ing save! I don’t want to have to redo every action just because I got totally stuck at the end of a level trying to put a hole in a bat and so went to play Dark Souls II instead to calm myself down! I’m not joking! 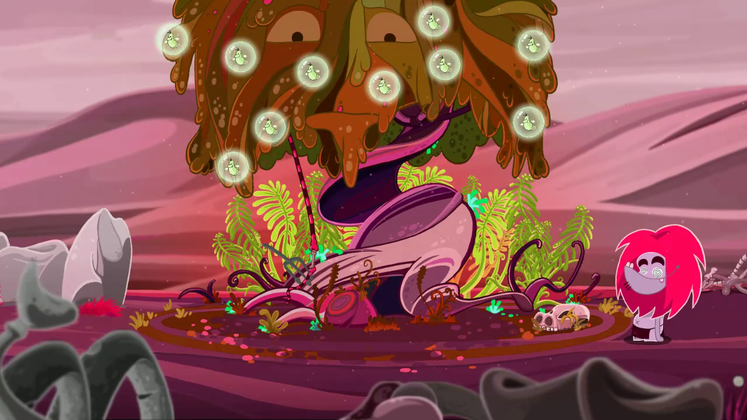 An apple tree with a snake in it, and after biting the apple you see a godlike being who sends you after a burning bush after being cast from paradise. Familiar somehow

The absence of hints though means that if stuck you have two choices - click around fruitlessly for half an hour to see if something works or clicks into place, or go looking for a walkthrough. Or quit the game, uninstall it and go play Machinarium instead. Fire is really utterly unhelpful, and Ungh’s useless question mark sign popping out of his head animation is the 2015 equivalent of the classic unhelpful “that doesn’t work” from the worst ’90s adventures. Still, at least pressing spacebar shows up interactive objects. The music and graphics are sweet as well, if both pretty basic. Yep, that’s the extent of my praise for Fire. Hope you enjoyed it.

Fire is a sweet, innocent adventure with a very kid-friendly style, and it hurts me to kick it in the teeth. But I will. Behind those innocent looks lies a very basic adventure, with no story, no dialogue, no characters, no personality, and no satisfaction. The puzzles are amusing but cheap, relying on the player clicking everything a million times in every order until something works, with no hints to help out and no mid-level save to compound problems. When you solve a puzzle the fact that you had to do everything humanly possible in the game first yields deeply unsatisfying gameplay, and the lack of consistency with rules (does Ungh have to be able to reach something or can the player magically assist?) muddles things further. Unless you’re looking for a quick cheap adventure to play on iPad I cannot recommend Fire at all… and it’s not even on iPad. 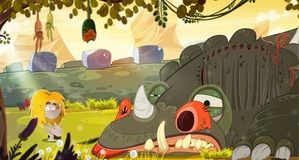 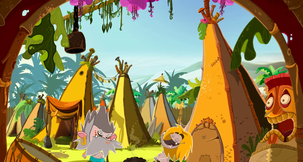