Jashobeam 3:16 says I just set your pigs on fire

FIVE: Guardians of David is an action-RPG that retells the biblical story of King David of Israel through the eyes of five of his greatest warriors. If the thought of a “bible game” gives you images of Catechumen - bless your poor soul if you remember that one - you’ll be relieved to hear FIVE is a mostly competent Diablo-like that even manages to mix in some unique, original mechanics. But some very un-divine problems, ranging from poor character progression to a bevy of technical issues, prevent it from doing much beyond preaching to the choir.

Jashobeam 3:16 says I just set your pigs on fire.

You control one of five Hebrew warriors and click-click-click your enemies to death. As you gain experience and level up, you get points to put into various abilities unique to each character. These range from basic attacks to much more fun options, like Shammah’s jar of hornets or Jashobeam’s Mortal Kombat-style spear. Finding the combination of abilities that works best for you can be an entertaining process, and getting into a good rhythm of attacks is satisfying.

FIVE’s unique mechanic is that you can switch between the guardians at any time. Each character uses specific types of weapons and abilities, so switching between them allows you to dynamically change your playstyle. It’s a cool idea, but it causes a lot of unnecessary maintenance when it comes to character development. You don’t adjust attributes after a level up, but rather spend points to upgrade individual abilities. That’s a simple system in theory, but spending those points across five different characters means way too much time staring at an abilities screen. 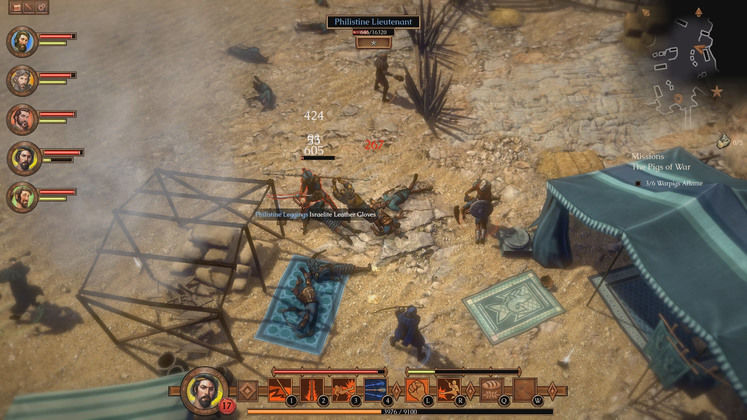 Turns out that Jashobeam is basically the coolest guy in the Bible. Who knew?

This doubly affects the heart of any action-RPG; the loot. Loot drops constantly, in great fountains of gold and weaponry, and every 15 minutes or so your party’s inventory will be completely filled with stuff. So every quarter-hour you’d need to stop and compare pages of equipment against what you currently have equipped across five different characters. So when it came time for inventory management, I’d just hit auto-equip on each character and sell whatever was left. This saved literally hours over the course of the game, but it meant that the highest damage and defense numbers were always equipped, rather than a customized set of bonuses and attributes.

But that level of customization is completely unnecessary because the game is incredibly easy, with no difficulty options or even a new game plus. Enemies quickly fall before your attacks, and on the few occasions that your health drops to zero, you have four more characters to switch to before the battle’s over. My deaths tended to be during boss battles, which mostly force you to use a single, specific character and fight a high-health enemy one-on-one. Most abilities are geared toward dealing with crowds of enemies, so fighting tough individuals feels haphazard. But every time you die, you respawn at a checkpoint within the arena while the boss keeps his current health, making defeating these enemies a simple matter of attrition.

Unfortunately, the game is plagued with technical issues. Most of the bugs are purely visual, like weird ragdoll and elevation effects. Some of them affect gameplay in mostly insignificant ways, like when enemies just stand around, not attacking. Some of them affect gameplay in more annoying ways, like when an AI controlled guardian gets stuck on a piece of the level, is left behind, then warps your entire party to his location once you switch to him. Key presses for abilities sometimes just don’t activate. That’s occasionally the result of your character being in an uninterruptible animation, but often happens seemingly at random. 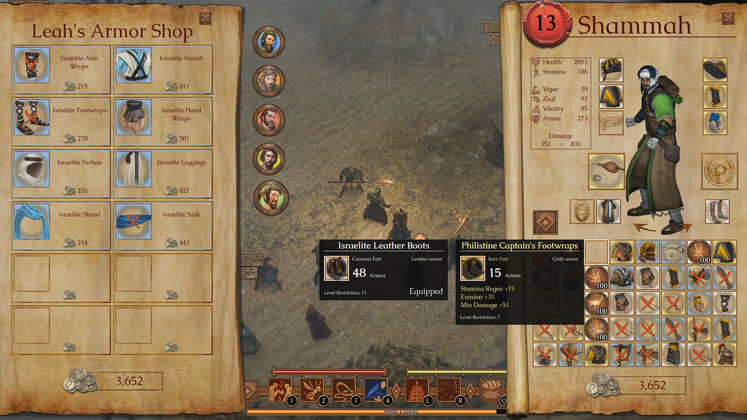 It’s also worth mentioning that FIVE’s opening is very nearly insufferable. It takes about two hours for the game to fully open up its loot, ability progression, and character switching, making the enjoyable parts of the game completely invisible to new players for an absurd length of time.

While FIVE’s Steam page generally tries to present the game as an agnostic interpretation of the story of an ancient Israeli king, the game itself is definitively set to tell the biblical account of the tale. To the game’s credit, it doesn’t make much attempt to whitewash the violence and vengeful wars that define the Old Testament, and it’s about as well-represented as it can be in a game with a teen rating. But if you’re at all turned off by the game’s religious setting, the Bible-quoting collectibles and optional biblical history quizzes aren’t likely to change your mind. 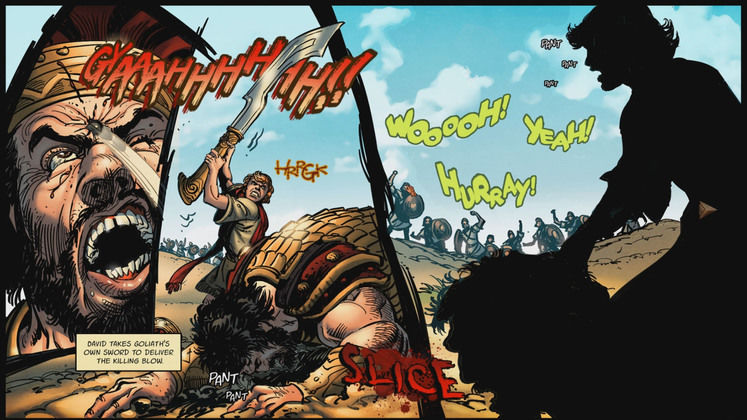 The story is mostly told through static comic pages with voice acting, which are about as well-executed as they can be, but because the story is hitting the high points of a massive, multi-year long war of conquest, it doesn’t have the chance to zoom in and really make any of the characters worth caring about. It oddly ends on one of the darkest betrayals in the Old Testament, which the game struggles to resolve into a happy ending.

FIVE has got heart, where most every religious game that’s come before it has ironically been pretty soulless. For a specific group of people - religious gamers who’ve been waiting years for a title that’s not a sad joke - FIVE fills a very large void. But for the general gaming audience, it’s extremely tough to recommend.

FIVE, at its core, is a competent action RPG with fun abilities and some original ideas. But with achingly slow opening hours, limited character progression, loads of meaningless loot, and an utter lack of difficulty, its appeal is limited.

The part where you have to strap pigs down with lit firebombs to destroy enemy camps. That part must’ve been in the apocrypha. 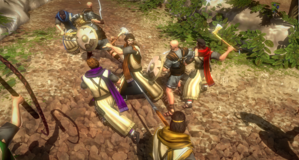