Yet another set of heroes have been thrown into an arena to fight for survival. Only this lot have a cool spirit guide

It's a well worn Fantasy trope. Since you've been born you've been destined for one thing. Sacrifice to the Gods. Only in Forced it's not just death, but gladiatorial combat you're being forced into (yes, that is actually where the name comes from – oh well). It seems some God, sorcerer, it-doesn't-really-matter demands entertainment, and the best entertainment around is to throw some poor locals into a pit and watch them get massacred by demons. A bit like X-Factor then.

So you - and maybe two to four of your friends - are the latest victims to be forced into the Arena. And to do this you're put in an isometric action RPG brawler where you have to go room to room performing certain tasks all while beating the crap out of the monsters that want to stop you. So much of Forced seems a retread of well worn ground.


You have a choice of four weapons, each comes with its own magic too. There's the ice shield, fire hammer, spirit blades and the storm bow. The bow is obviously ranged, the hammer slow melee, and blades quick, with the shield a bit in between and a limited range throw. So far so predictable, however each comes with the addition of magic, specific to the weapon, which really improves your options. They add a lot more to your decision, and the choice of which powers you use is pretty diverse.

Thankfully they all level together so if you're playing with less than a full roster you can experiment and change tactics to your heart's content. Which is quite important because I found some trials really benefited from one particular style over the other and none of them seem to be getting the spotlight more than the others. Though I have to admit, the ice shield held a special place in my heart, since not only did it perform all three jobs of the others but had a block on it too.

The trick to levelling is all in earning crystals, which is another tried and tested videogame formula. Each level has three crystals on offer. The first is just for completing the level, the third is the obligatory time based award, the second however is for challenges. Sometimes these are just playing the game well – kill x amount of bad guys etc – but more often than not stretch you to play the game differently, as all good challenges should.

The more crystals you have, the more skills you unlock, and the more slots you have to fill. Rewarding you for sticking with the game, it's a system that works pretty well for an action RPG. You can't farm XP, but actually have to prove yourself in the actual game. It's a lesson games of this description could do well to pay attention too.


However these are not the only tool at your disposal. For gladiators are assigned spirit mentors to help them through your trials, and this mentor is what really moves Forced away from just being a generic brawler. Balfus, your own little ball of energy is a chatty bugger, and about the only personality this entire game has, but apart from explaining how the game works he has a few in game uses too. Most obviously is the ability to activate towers when he passes over them. These range from healing, switches and various damage dealing abilities. Handy when you need them.

Things get really interesting when your tied directly to Balfus. Some levels he's quite literally your lifeline. Go too far away and you start taking pretty hefty amounts of damage. Suddenly your ability to call or direct him is even more important, and sharing amongst three other people can get pretty unpredictable. If it wasn't for Balfus, both in-game and speaking, Forced would be a much more forgettable game.

On a joypad the controls are the same as any two stick shooter, and when you're just walking about it feels a little odd. However, those times are rare and the minute combat kicks everything makes sense. On keyboard it operates much as you'd expect, with the mouse cursor used to point your champion in the right direction, while a 360 pad works wonders once you get multiple powers going – something that happens pretty quickly – with them shared over the triggers and bumpers, your average mouse won't fair as well.


By yourself, Forced is a little lacking. It's not quite deep enough, and the difficulty curve ramps up to an insane degree pretty quickly. I usually played a couple of levels then lost interest again. However, if you're looking for something to play with mates, without having to worry too much about what's going on, Forced is perfect. Most levels take about five minutes to play too, so there's plenty of jumping on and off points. However, the game ups the amount of foes and changes some of the puzzles to take into account all the extra manpower you have on your side. While that seems a little unfair, you also get unlimited lives, though that's with a thirty second respawn, and in this game, thirty seconds is a long time.

Unfortunately right now there’s problems a plenty with servers, no matchmaking and lack of friend invites, It’s not exactly easy to get a match. These things really should be standard from day one. Of course this is all getting patched in the days to come, but it’s hard to recommend when they’ve not included it yet.

That moment in co-op when you just starting working together without any communication. 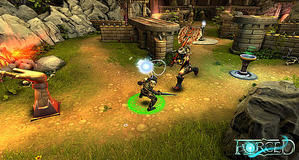