Last night I watched some of the greatest action I have ever seen unfold on my TV screen. Yes, I watched Kung Fury. God it was awesome. Oh, and the ‘Hardhome’ episode of Game of Thrones too. That was pretty damn sweet too. Despite the lack of time-travelling kung fu Nazis and dinosaur cops I’m still pumped to play a new episode of Telltale’s interactive Game of Thrones tale, especially as the menu screen promised White Walkers. Let’s get stuck in then?

About the White Walkers… let’s just say that Telltale are really getting into George RR Martin’s head. In other words, they’re not here. Sigh. Gared Tuttle, brother of the Night’s Watch, may be in a lot of crap and about to head further North, but it’s not Other-shaped crap just yet. I’m guessing Telltale are saving the Wights and stuff for the finale. As for the rest of the Forrester clan, things are going equally badly. Mira’s losing the grip of things in King’s Landing, Roderick is the lord in name only of the Forrester home of Ironrath, and on the other side of the world Asher is bargaining with the Mother of Dragons where his only bargaining chip is “helping with the total invasion of Meereen”. This is one cursed household. 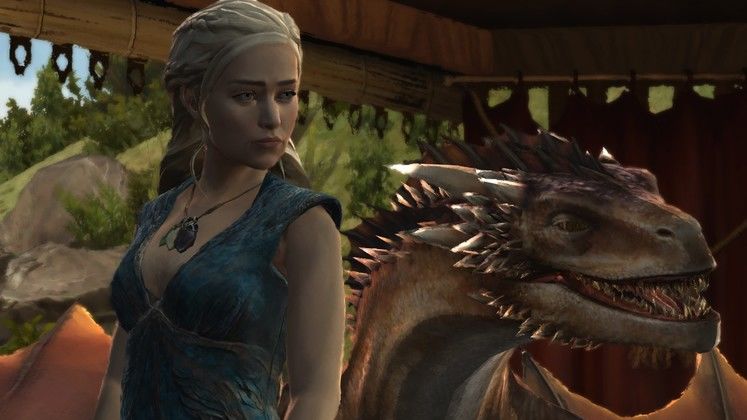 Mother of that Dragon. And Dragon.

I’m going to be honest here and admit I dread playing each new episode of Game of Thrones. Not because they’re bad, but because they’re so damn stressful. It’s one thing to watch the show and be upset because such-and-such Stark (it’s usually a Stark) had such a horrible thing happen to them, but it’s another thing to actually be involved and make the “stupid decisions” that leads to that horrible thing. Every single member of the Forrester family, including their Jon Snow equivalent Gared Tuttle, has horrible experiences and you’re at the centre of them. I love this series, but damn do I feel crappy afterwards. No rape though, so thank heaven for small mercies.

It’s fortunate then that this episode, the penultimate episode, has the opportunity to make things go a little better for the Forresters. Yes crappy things still happen, but they can actually win a few battles this time. Of course this is the time in the show where we usually get a Red Wedding, and I’m not going to say a word about the ending, but it’s still nice not to just be trodden on entirely. I do like how the story’s progressing and things are coming to a head in every storyline. However, there are a few really predictable moments in the plot. In particular one point in Meereen involving Asher Forrester and his friend Beshka, and the ending. There’s still not enough humour either. The thing everyone forgets about Game of Thrones is that’s it’s got a lot of light moments to balance the dark. Telltale certainly seem to have forgotten. 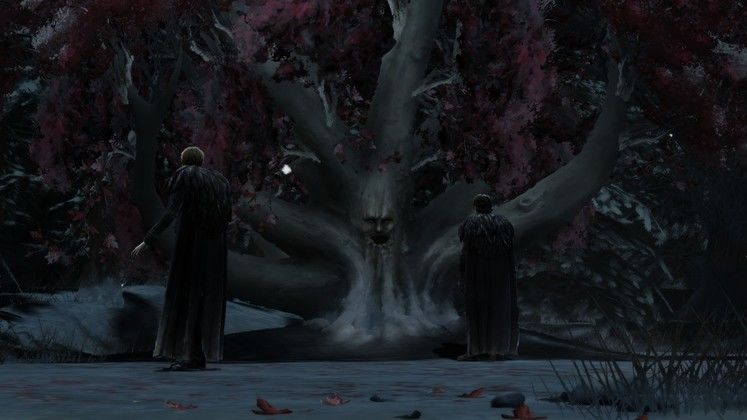 Stick your arm in his mouth. I dare you.

Nevertheless I really like the characters. Emilia Clarke’s Daenerys Targaryen is the one significant character from the show to feature this time around, others are reduced to wordless cameos if they appear at all. No, it’s the original characters that are shining. You really feel for all of them, struggling to put their family ahead of themselves, and it’s neat that with mercenary Asher you can choose to make him be an arsehole. Beshka plays a big role and gets a lot of backstory too. Funnily enough though my favourite bit of character development this episode regards the Whitehills, the rival family to the Forresters who until now had been portrayed as blustering bullies. Episode 4 though has a few moments where the Whitehills get a bit of extra depth, even the odious Gryf, and it’s most welcome.

I don’t like the QTEs though, and they seem particularly annoying in Sons of Winter. They often blend in to the background and I honestly must have messed up over 50% of them the first time they appeared, and they often seem very random. Plus how can you fail squeezing through a gap? What’s worse though are the moments where the game doesn’t offer QTEs and simply suddenly gives the player control of a character without warning, then expects them to know to push forward or right or whatever. The first time this happened I thought it was still a cutscene and Gared got an arrow in his neck.

It’s rather ironic that the gameplay is fast becoming the thing I like least about Telltale’s games, but fortunately the developer’s patented choice/consequence system is where the real interactivity lies. Yes there are a few predictable storyline beats but when the player’s given control things can go south fast. The best moment for this is with Mira at Tommen’s coronation feast, where she (and the player) has to make many choices that can wreck a friendship, a business partnership, and a crippled man’s happiness. All to get what she wants… or not, and risk possibly dooming your family. 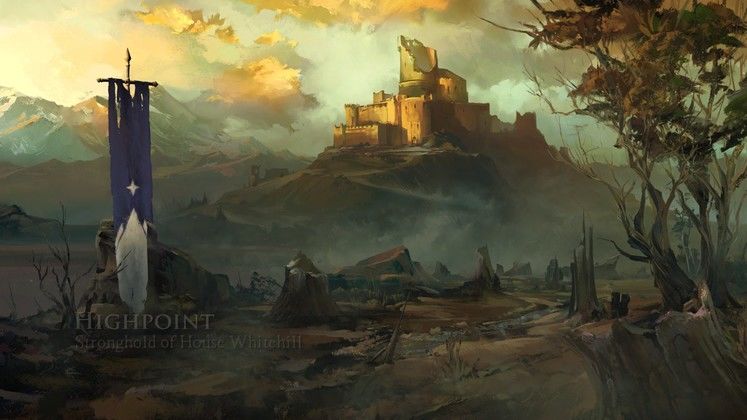 Okay, it's better than I could do, but still...

And finally, the obligatory note on the graphics. While they are growing on me during the conversation moments, which is 80% of the game, the “bigger” moments just fall flat. Seeing the splendid city of Meereen or the Whitehills’ castle introduced as a slightly poorly painted still image is hugely disappointing and looks like placeholder art. Furthermore the liberation of Meereen, so epic on the TV show, consists of three characters looking at something we can’t see. Game of Thrones clearly shows Telltale starting to bite off more than they can chew, and I doubt we’ll be seeing any massive action sequences in Episode 5 like we would on the show about now.

Game of Thrones is really beginning to kick in to high gear as things start to possibly look up for the Forresters in Sons of Winter, but most importantly the characters start to get much-needed shots in the arm. The Whitehills for example are still scumbags but at least they look out for each other. The choice/consequence system continues to work well and makes the whole thing very stressful, in a good way. Other than that though the gameplay continues to get on my nerves and the graphics occasionally dip into “temporary art” territory. So, a fine but not spectacular penultimate episode. Hang on, where are those White Walkers Telltale?

The tense assault on Meereen. Or the dinner party. Either of them.