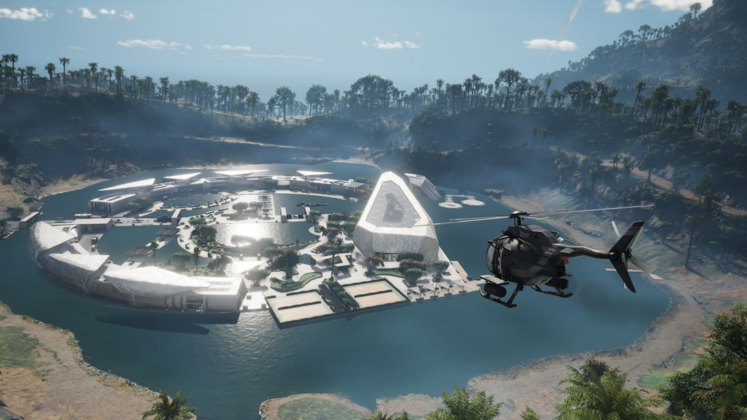 Ghost Recon: Breakpoint had a rough launch. After boldly expanding into the open-world formula with Wildlands, Ubisoft’s sequel had everything set to get it right. But instead of delivering a more fleshed out experience, the second Ghost Recon foray of the 2010s replaced most fan-favourite features for a loot-based online focused humdrum experience that left Ghost Recon fans old and new disheartened.

Flash-forward six months, and Ubisoft has gone through a creative restructuring. The underwhelming reception to both The Division 2 and Breakpoint successfully drove the point home that not all of their games should have generic RPG elements and loot shoved down their throats, leading the Ghost Recon team to unveil its strategy to save Breakpoint: the Ghost Immersive Experience. 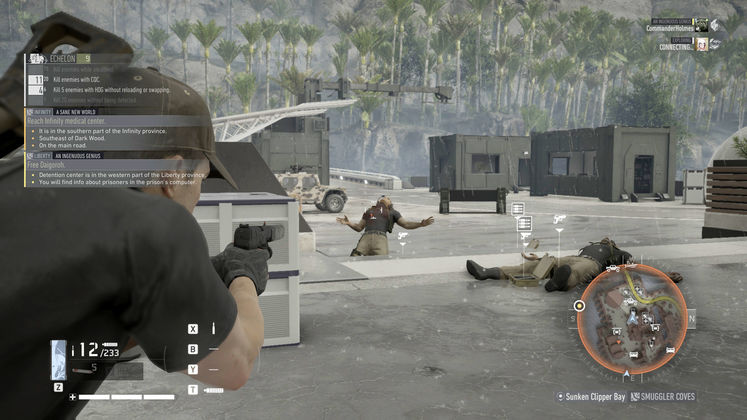 Shedding gear rarity and levels, the optional Ghost Mode allows players to equip any piece of clothing as a cosmetic item only, and normalises the stats of every gun – no longer will a level 14 M4A1 assault rifle magically deal less damage than a level 16 M4A1, for example; from now on, every single M4A1 is as deadly as any other.

Similarly, the survival elements can now be toggled individually, both in quantity and intensity. You can set how fast your stamina depletes, how much of your health regenerates (or if it even regenerates at all), how many bandages you carry, and even how often damage to your health becomes a minor, severe, or critical injury that needs to be patched up. 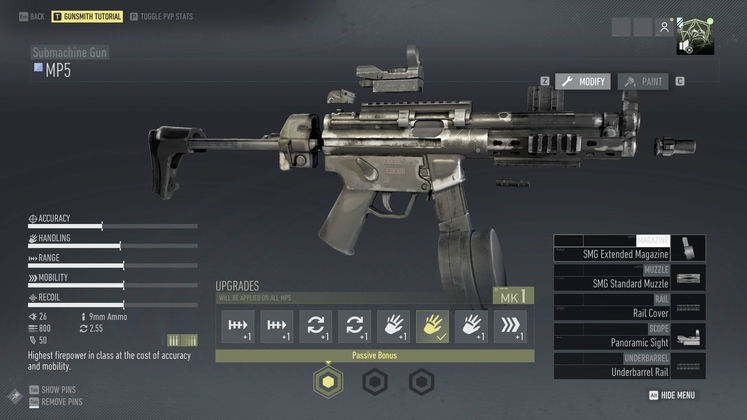 These changes managed to solve most of the biggest problems with Breakpoint, which upon launch was unrecognisable to fans of the franchise: a series that prides itself on being thoroughly military – a more arcadey proposition to the likes of ArmA that didn’t sacrificed the tacticality that is intrinsic to the approach of any military operation – now diluted and twisted beyond recognition into a loot shooter it should never be. While not all issues were solved, the Ghost Mode is something hitherto unheard of from Ubisoft: the actual listening of feedback from its players and a 180 reversal in creative design that was actually a step in the right direction to fix the problems with their game.

Compared to the woes of The Division over the past few years, where the launch of its sequel (and most recently, the launch of that sequel’s expansion) just repeated all of the same mistakes that caused players to flee in mass several times in the past, Ghost Mode is honestly refreshing – a statement that Ghost Recon is a property to be respected and not milked for money, and a message to players that they are being listened to. 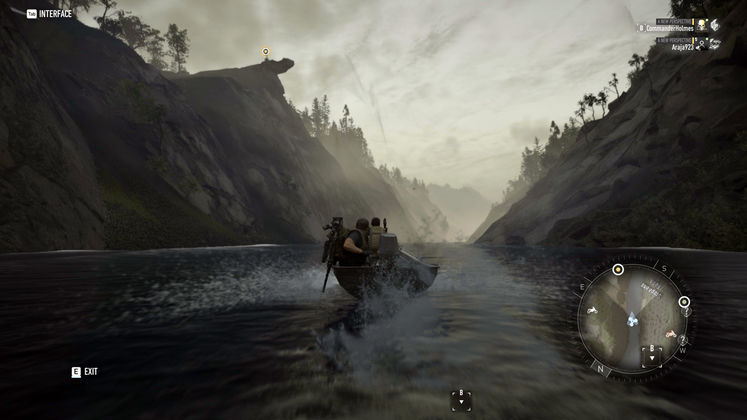 Like anything else in life, the mode is not perfect and Breakpoint still bears the scars of misguidedly, and at times, badly designed game. The new option added in Ghost Mode to lose all the ammo remaining on a magazine when reloading still doesn’t keep track of rounds in the chamber, and raids still need four players and require gear levels to be on, guaranteeing all of us military players will A. never experience that content, and B. never unlock their rewards, the same way we don’t unlock the unreasonable many items which require participation in that Ghost War multiplayer PvP atrocity.

Similarly, some of the games biggest gameplay issues remain unaddressed, including the inventory system designed for console players that only allows you to choose four items – two offensive and two utility – to use through a crappy radial wheel. Given the dozens of items in the game (including upgraded versions of grenades which for some reason are counted separately from its non-upgraded brethren), this sub-optimal “feature” renders most of the inventory useless, forcing you to go through menus to change your items mid-battle and virtually guaranteeing you will never use binoculars, water canteens, or ration kits QoL instead of the grenades and rocket launchers that actually make a difference in life or death scenarios. The binoculars are a particularly painful step back, given Wildlands already had a dedicated button for them which got senselessly replaced with a preposterous item slot in Breakpoint. 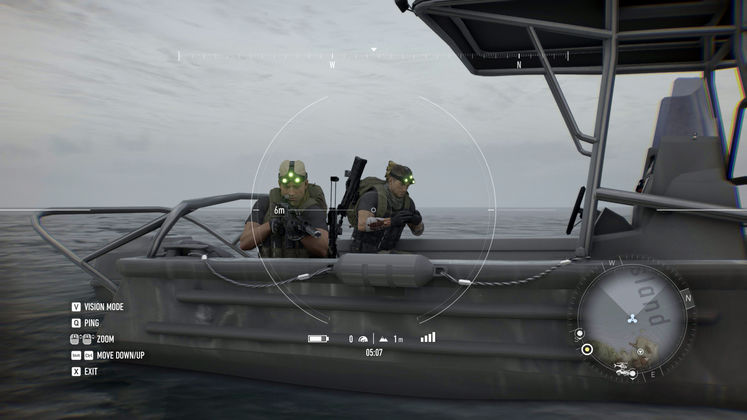 However, this doesn’t mean those issues won’t be fixed. Ghost Mode brought hope back to the equation, breathing new life into the open-world Ghost Recon formula and potentially saving it from the early, shallow grave it was headed to with the painful release of Breakpoint last November. And interestingly, in a move that feels part “PR damage control” and part “genius move”, Ubisoft coupled the resurrection of its stillborn Ghost Recon title to the return of another “dead” franchise: Splinter Cell.

The surprise yet long awaited return of Tom Clancy’s spy series arrived as a DLC Episode at the same time as Ghost Mode, bringing 8 new missions featuring Sam Fisher and Vic Coste, both voiced by their original voice actors from Splinter Cell: Conviction. Michael Ironside – renowned Hollywood actor and Sam Fisher’s voice throughout all meaningful Splinter Cells games – had already made a guest appearance in a single Wildlands mission back in 2018, following an unceremonious replacement by a newcomer for Splinter Cell: Blacklist. Back then, Ubi blamed the replacement on the “need for an actor capable of performing both voice acting and motion capture” – a shamefully easy debunkable excuse given they were already using standalone motion capture artists for a couple of years by that point. Luckily, Ubi has largely backpedalled from that incident and brought Ironside back to the role, garnering a lot of praise from fans of the franchise and convincing some Splinter Cell players into trying out their hands at Ghost Recon. 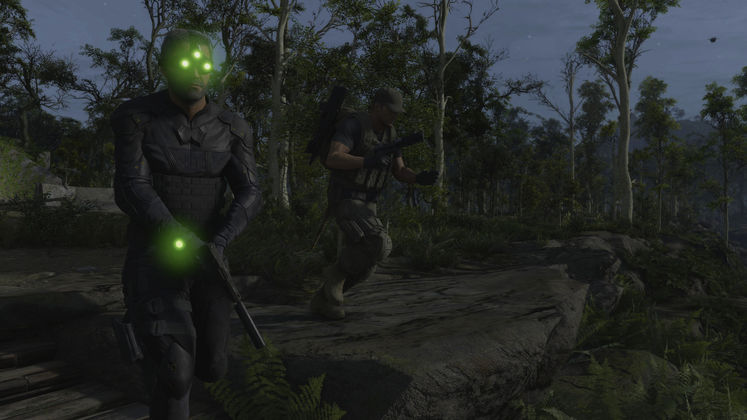 The Splinter Cell missions are actually good, featuring a nice dose of stealth that plays very well with Breakpoint’s more refined mechanics. Wildlands’ foray was an exercise in frustration thank to its horrible binary stealth system and ridiculous immersion-breaking AI which never missed a shot, but Breakpoint’s granular detection system and AI with believable reaction times (and which actually miss shots) allow you to have very tense missions, sometimes rescuing operation from the brinks of a detection by a quick placed shot before the enemy manages to shoot you.

As part of the DLC mission rewards, you are able to dress as a Fourth Echelon agent – including the signature goggles, Conviction’s/Blacklist’s SC-40K, and an updated version of the SC’s modified FiveseveN pistol (which now features a huge suppressor/compensator). There is also a new Echelon class that triggers a sonar pulse that marks enemies through walls – complete with Splinter Cell googles activation sound – which grants bonuses against detection when standing in the shadows and removes damage penalties from suppressors. 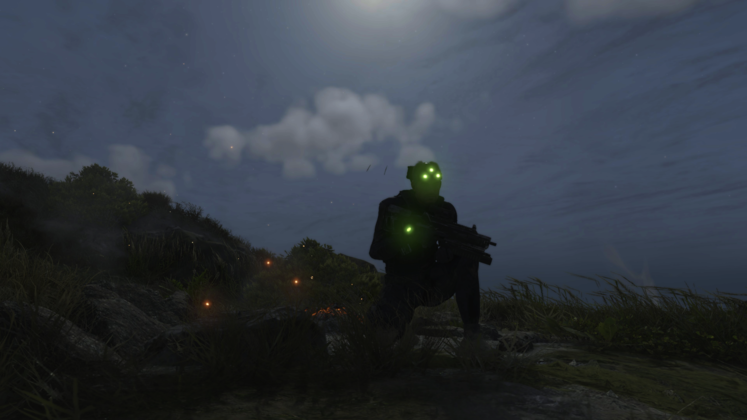 It’s worth noting the missions are also light on Sam Fisher, which only appears in the first and the last operations in person and spends the rest of the time briefly talking to you via radio. Ironside’s performance is, as always, amazing – a terrible contrast with the atrocious voice acting of the Breakpoint’s Nomad, which was already a step back when compared to Wildlands’ original Nomad VA or their CIA handler, Bowman. It makes you wish for a fully fledged Splinter Cell game in the likes of Conviction, which allowed Sam to express a full range of emotions ranging from angry or sad to happy or business-like.

While we wait for the hopeful announcement of a new Splinter Cell game in the future, Tom Clancy’s fans will be happy to know that Breakpoint is actually fun, now. The new Ghost Mode solved many of the issues that plagued the original version, and while it isn’t fully healed from its painful stint as a non-Ghost Recon game, the latest entry in the franchise is trying its best to course-correct. If you are one of the many people who were put off by it at launch, I would recommend you try and give it a try now – just like the eponymous Group for Specialised Tactics, Ubisoft might yet turn this near-miss of the series’ breakpoint into a franchise victory.

A year after launch, Breakpoint finally delivers most of what fans expected from Ghost Recon – although some flaws are too intrinsic to the game design to ever be fixed.

Every second of Ghost Mode, aside from inventory wheels still being useless and binoculars being frustratingly unintuitive to access.