Gods Will Be Watching

Gods Will Be Watching Review

Will the gods be watching Stevie?

Gods Will Be Watching has been a hotly anticipated independent game ever since its origins as a small Ludum Dare project were announced to be expanded. The attention it gained was from the potential to place players in extremely stressful and morally uncertain situations, aspects which were shown prominently in it's original state. However now Gods Will Be Watching is a much bigger project all together, with more ideas and concepts woven into this new experience. But what works in a small Ludum Dare title, may not always work when blown up - and while Gods Will Be Watching doesn't compromise on any ideas that were originally gathered, its design may have missed a trick when given a bigger platform.

In Gods Will Be Watching, your main focus for the story is Sgt. Burden, and the slowly unravelling story taking place in his memories. The plot starts out on a campfire in an isolated alien world. After this parts of the back story start to reveal themselves, with small situational puzzles leading to tiny details about the world- details which the game respects you enough to piece together. This is perhaps one of the best aspects of the game, as the universe is not only interesting itself, but it is presented in a way that lets you absorb every little detail about it. You will have no idea about the world going into the game but sometimes a character will make make an offhanded remark- which will usually give away a clear aspect of this world. If anything Gods Will Be Watching can be praised just for the way which it paces itself- slow and elegantly.


Working out just what this world is, becomes inviting when the art itself just looks wonderful. While pixels are a very distinct style within independent gaming, the sprites in Gods Will Be Watching are clearly different to anything else being offered, visually. The art seems to have its own flavour with a consistent style displayed throughout. Characters for example look quite lanky, giving everyone a thin shape which becomes a recognisable feature in the games world. The backgrounds also breath life, with anything from beautiful alien landscapes, to metallic corridors managing to look just as lively as one another thanks to a few extra idol animations in the environment. Basically this unique sci-fi world stands out as a brilliant result from excellent writing to visual cues, and is a key feature to the whole experience. On a technical level though these visuals can be ruined. On more than a couple occasions bizarre graphical glitches forced some characters to get caught in random animations- an unfortunate event since this can often upset the intended tone.

If anything else is true about Gods Will Be Watching, is that its pure potential stands out amongst almost anything else. The essential idea behind the game is to provide the player with a set of intense, and stressful situations, with the goal of testing your morals as well as your thinking power. The ideas behind the game are so unique and clever that it's tempting to give it special treatment when describing the experience. Before diving into the meat of the game this should be noted as there aren't too many games ascribing to what Gods Will Be Watching tries to execute. However intentions and executions are often worlds apart, and this is a tragic fact that unfortunately becomes applicable here.


Difficulty is always a very uncertain element to judge, as 'hard' can often be the result of great game design, or of bad. However what separates two types of 'hard' is often how it effects everything else. Does a punishing difficulty for example help or hinder the gameplay being showcased? In regards to Gods Will Be Watching, the difficulty does the latter as what's being communicated by the games tone, story, and potential is completely antithetical in relation to just how easy it is to fail.

In the game you are placed in stressful situations. As a hostage victim, or an enforcer for example, there are an array of predicaments which see you with various things to keep track of and numerous ways in which you can fall into a 'lose' state. This is assumed to be a way of keeping the player in this stressful state, having to make sure detailed thoughts are placed behind each new action. However this becomes a problem when it makes moral decisions hard to make. Not hard as in morally, but in the sense that the desire to see the rest of the plot, forces you to not really care about how you're dealing with the situation- just that you're doing it. Many situations call for you to choose how to act, but there really only seems to be one correct way to be at any one time. All other options may lead to an end state meaning that only one real choice can stand out- the choice of progression. Moral choices don't take much weight when it feels that taking them was the only way to progress, but due to the games high difficulty and random elements it's hard to become emotionally attached to any decision you make, when you made it just to proceed. This could have been a pertinent comment on the nature of making choices, but it doesn't feel intentional. It feels like you should be deriving an emotional attachment to the way actions are made in game- but due to how unfair each puzzle is, you won't care about the way you're progressing, just that you are.


There is an easier mode for story and plot purposes, but the game actively discourages you from doing this. While it may be seen as a cheeky way for the player to try the original and harder mode, the game outright tells you that it isn't the way the game was made to be played- this makes you feel awkward for trying to play in a different way.

GODS WILL BE WATCHING VERDICT

Which is what it suggested here: Play on easy. While it does have problems in relation to its original difficulty, some of the situations presented here are just too unique to pass up. Nearly the whole of Gods Will Be Watching relies on your ability to act within situations, but when these situations feel so limited it’s annoying to not be able to express yourself freely. This makes the game immediately frustrating as its premise, intention and art set the experience up for something incredible. But the badly designed and unnecessarily hard game design stop your actions from really ‘meaning’ something. Gods Will Be Watching is not necessarily frustrating in its difficult, it’s that it really didn’t need to be.

Playing on easy may not be ideal, but it will be worth it just for experiencing 20 days of in-game torture.

Gods Will Be Watching Essentials 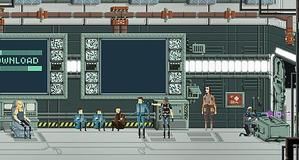