If you ask me what my favourite game of all time is, my first response would be “only one?!”. Then I’ll weigh up the pros and cons and my general mood around my top 10 favourite games, before finally settling on one by which point you’ve probably gone home. Invariably though, one of the answers I will give for the top spot is Grim Fandango. And now, 17 years after it came out, I finally have a chance to explain why. Next review goals: Half-Life 2 and Deus Ex. Damn, just missed out on Legend of Zelda: The Wind Waker. Oh well, um, yes, Grim Fandango is the best adventure game ever.

The story is the most important part. In the Mexican Land of the Dead, Manuel “Manny” Calavera is working off time for some unspoken crime as a Reaper, a “travel agent” to help newly-deceased souls find their way to the Land of Eternal Rest. Unfortunately he’s down on his luck; while previously he was the top travel package agent in the Department of Death he now is only getting cheap penniless clients, while his rival Domino mysteriously gets all the good ones. Something is rotten in the Land of the Dead, and Manny Calavera along with friendly speed demon Glottis plan on finding it out. And it all revolves around a woman named Mercedes Colomar… 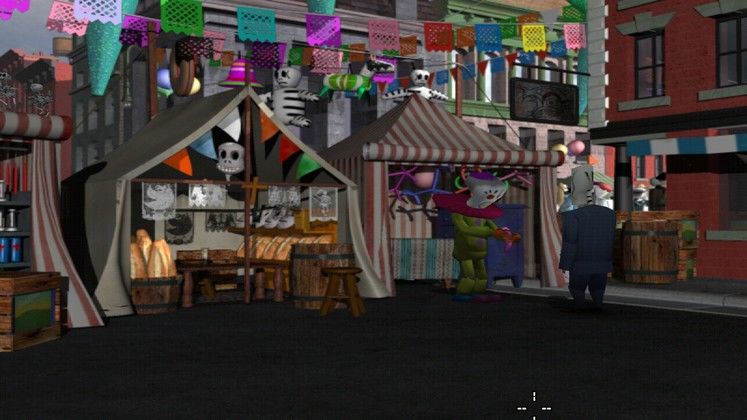 What are you practicing? Wringing your neck, what does it look like?

I can’t spell it out any clearer than this: Grim Fandango has arguably the best videogame story ever. Tim Schafer is a fantastic writer, Grim Fandango is his finest work, and every part of the storytelling in the game comes together perfectly. The plot holds together beautifully and remains intriguing all the way through, the dialogue is snappy and full of character, the humour dry and dark and when it hits you it’s like a gut-punch of funny, and the characters. Oh boy, the characters. Each one I could write an entire review on. Manny is completely likeable, slightly like a Mexican Humphrey Bogart, with plenty of great lines and an infectious determination. It’s his “comedy sidekick” Glottis though that steals the show. If Grim was an animated movie Glottis would be voiced by Eddie Murphy or Josh Gad and would sell a million stuffed toys (I’d buy one). He’s loveably stupid, and devoted to cars, speed and his friend Manny. The acting is also first-rate, and frankly if it became a film I wouldn’t want Eddie Murphy - I want Alan Blumenfeld back as Glottis.

Then we have the world, which deserves its own paragraph. The Land of the Dead is a wildly imaginative place. It has its own rules, currency, creatures (flying spiders! Hell beavers! Purple Tentacle!), locations, and most importantly style. That’s the crucial word when dealing with Grim Fandango. Style pours out of every design, which is all done like a cross between a Day of the Dead festival and Film Noir movies like Casablanca. It’s this style that ensures that even though the graphics are rather basic (characters are late ’90s polygon models over 2D backgrounds) it still looks fantastic even now. It’s all lovely, from the colourful streets of El Marrow, the grimy Las Vegas meets 1920s Chicago of Rubacava, the deep sea where monsters lurk and the End of the World, where Manny’s journey doesn’t end. 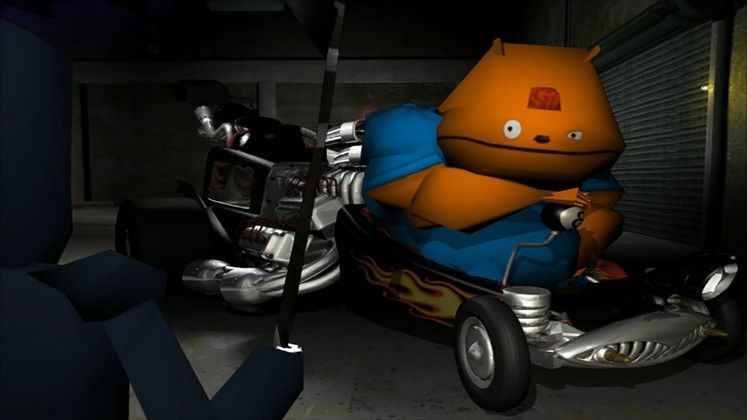 Glottis, are you loco? That was a company car! Yeah, and it's even better company now!

The hardest thing to get used to now though is the puzzles. Grim Fandango represents the LucasArts adventure at its most vicious. Most of the puzzles are fantastic, clever, and fair, and you’ll work them out with just a little thinking. There are a fair number of puzzles that rely on simply trying everything, like punching Domino’s punch bag to get his teeth guard - which you can’t even see before you punch the bag. Others rely on trial-and-error, like a spinning machine in the Forest that you have absolutely no way of knowing that you need to make the pumps on the left synchronize and the pumps on the right do the same, but not at the same time, then get Glottis to climb it and switch it back on. Rubacava in Year Two is both a highlight and a scary place, as it’s basically a huge open world where you can explore every part of the town and often have several puzzle solutions on the go, with no way to keep track (other than a pen and notepad) and so much to try and do it’s mindblowing. It’s Dragon Age: Inquisition in adventure game form, for better or for worse. The puzzles all make sense at least within the world and you always have everything you need to solve them, and LucasArts always did know the value of a satisfactory puzzle payoff better than any other developer before or since.

Grim Fandango is also lacking in any in-game help, which is where this review neatly segues into talking about what’s new in this Remastered edition. Basically it’s everything a Grim fan could really want. The Developer’s Commentary is fantastic, there’s one in nearly every area and it’s not just Tim Schafer talking all the time, they’ve got a load of different developers even including composer Peter McConnell. Speaking of which the wonderful jazzy soundtrack has been re-recorded and sounds gorgeous. Textures have been slightly improved, and there’s a Widescreen option too although it does make the backgrounds look a little stretched. 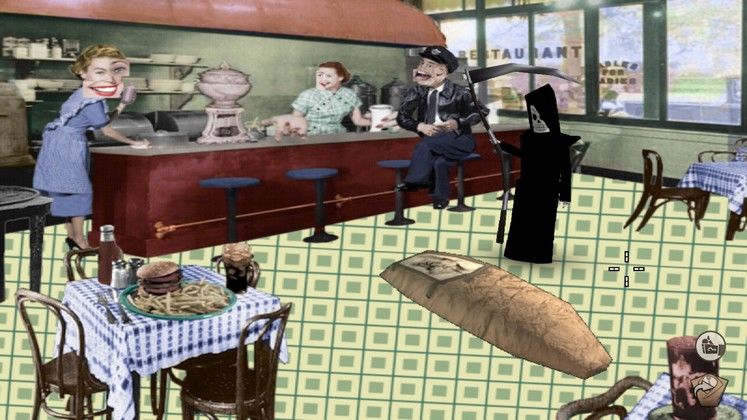 The living still give me the creeps.

Then there’s the controls. The original Grim used Resident Evil-style Tank controls which were a little frustrating, so it’s with great relief that Double Fine have also added a Point-N-Click mouse option too, which works so well it’s astonishing to think that it wasn’t there in the first place. It’s still a little buggy though - sometimes the verb icon (designed to look similar to Full Throttle or Curse of Monkey Island) goes off screen, and occasionally I couldn’t select a dialog option. The worst thing though is the aforementioned lack of any sort of hint system or interactive object highlighter in this day and age. You don’t want to send people to GameFAQs or Youtube for a solution, which they can do with a simple Alt-Tab, you want to keep them in the game even if you have to spell out to them what to do with that Scythe.

Grim Fandango really is a masterpiece, although it’s not a completely perfect one. The story, world, voice acting, music, script and style are some of the best gaming has to offer, rivalling the best animated movies. The puzzles are 80% superb, best the adventure genre can do, and 20% frustrating as all hell. Nevertheless that’s an absolutely minor thing in the grand scheme of things, and the world and writing are so incredible you’ll let any trial-and-error moments slide. The Remastered edition ensures that Grim can be played today, and the cool Developer’s Commentary and Mouse Controls mean that even people like myself who have played Grim a dozen times can still enjoy it fresh again. Not much has been done with the graphics other than a bit of widescreen adding but the lovely style the game has means that it doesn’t matter, and it still looks great anyway. To put it all into one sentence: you want to experience the best storytelling in gaming, you need to play Grim Fandango. You’ll have to use a walkthrough on the Forest, but it’ll be worth it. So then Double Fine, Disney… Day of the Tentacle: Special Edition ready yet?

We could be here all day, so I’ll go with either “Love? Love is for the living” or “from today we soar, like eagles… on pogo sticks!” 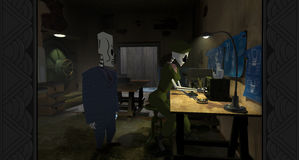