The worst game ever made?

I’m not going to beat around the bush or keep you in suspense here: Haunted House: Cryptic Graves is honest to god the single worst game I have ever played. I’ve been reviewing games for a good long time and while there’s always been the sweet fruit I’ve also played the real dregs of the barrel, the awful garbage that makes 6.0 scoring titles look like masterpieces. Escape Dead Island was the last game I reviewed and scored a 5.0, but that looks like Half-Life next to Haunted House. Now that we’ve established that you shouldn’t buy this game for any reason other than hilarity, let me tell you why.

The game is a first-person survival horror set in a creepy mansion, which is why I was actually looking forward to it since that is exactly the game I want to see. Unfortunately Haunted House makes such a ham-fisted job of it my anticipation turned to ashes even before the game started. Even the loading screen looks incredibly cheap and amateurish, as does the logo that forgets that ‘House’ is supposed to be capitalized. The Main Menu features a slow pan back and forth over a gargoyle that’s textureless for about two seconds. And the options screen? Bare-bones, even after the most recent patches that finally allowed 16x9 resolutions, but still don’t expect to change control or audio settings. 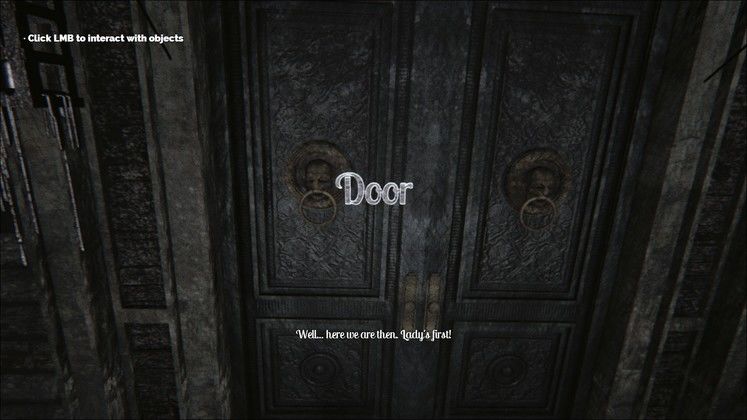 Then you start and the nightmare begins, in an utterly unintentional way to how Atari and Dreampainters want. Everything is so astonishingly badly put together it makes you wonder if anyone from the developer ever played it or any other game ever before. From the big things to the little things Haunted House has no redeeming features whatsoever. Let’s start with the story so I can explain why it’s terrible.

You play Anya Graves, and already you should be rolling your eyes as you realise that the game’s subtitle isn’t referring to cryptic gravestones, which still doesn’t make sense but at least it’s more interesting than saying the main character’s a bit of a puzzle. Anyway, Anya’s been investigating the Graves Mansion for months with her platonic partner Stan Galecki, and then suddenly finds out that she’s the heir to the mansion’s owner Zachary Graves - what a stroke of luck! Apparently she gets the house if she stays one night there and none of the other family members wanted to do that. What?! Even if all of them believed in killer ghosts, surely at least one of them would think “I get the entire mansion and estate? F**k ghosts, I’m going!” Anyway, her and Stan are the only ones there, have to stay the night to claim the house, and will investigate the paranormal phenomena in the mansion while they do so. And Anya has unearthly psychic powers too, because why have two stupid plot twists in the opening cutscene if you can have three?

The level design is atrocious. Basically this is a running through hallways trying to find a door that actually opens simulator. After being in the mansion for all of two minutes everything goes black (which is odd because the lights weren’t on in the first place and you can’t turn off moonlight) and you end up in a child’s bedroom. After escaping through the liberal use of staring at things you then have to walk back and forth down a hallway trying all the many doors more than once until one opens, you go inside, find the one thing of interest in the entire room, and use it (it’s a key) to open another door - and you don’t know which so you have to try them all again. This happens many times. One time I couldn’t find anything of interest at all in two rooms until I found an unmentioned lever hidden behind the door that for no reason I had to press three times to work. Most of the game is like this - trying to find an open door or something that opens a door. It’s so tedious. Limit our progress with monsters and challenges, not finding a key. 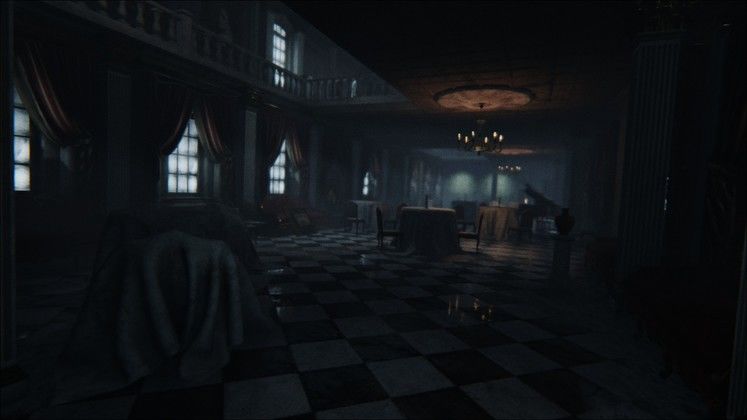 I hate this room. You will too, if you don't listen to me and avoid this game like the plague

Not that the monsters are much better. There are a small selection, but frankly they ruin what little good the game had. Stalkers in particular, which is the first creature you face and the moment where the vast majority of players will exit, uninstall the game and demand a refund. They’re invisible unless you use Anya’s convenient psychic power “The Veil”, kill you instantly, and often can see through walls and objects. You have no way of fighting them so the only way to get past is stealth, but fun stealth is a tricky thing to pull off and requires development skills more advanced than anything Dreampainters clearly can pull off. And did I mention that The Veil is tied to your fatigue meter (that you can’t see) which takes ages to recharge, so with it you’ll be able to see a Stalker for three seconds and then have to wait five seconds to see him again? And even then you can only see things within a few metres? In the first encounter you’ll walk down a spiral staircase, die nearly immediately, and will keep dying until you confuse the Stalker around a table, run into the next room and shut the door - which of course they can’t open. Atrocious.

I would say “I wish they’d focused on puzzles instead of monsters” but the puzzles are equally bad. If you’re not just wandering through empty rooms looking for the one and only thing you need to progress you’re desperately groping at things to do with no clues given on how to do anything, or even that you need to. Furthermore even after two patches the game is so broken and infested with bugs you’ll probably be struggling without the monsters. An early puzzle in the Ballroom (which also features a Stalker) had me completely stumped. I guessed I had to put some pictures on the walls or collect pieces of a shattered pot but I couldn’t do either, so I went on the Steam forum and was told simply “it’s broken”. Great. Fortunately the latest patch fixed the pictures with the requirement I start the game again, so I grudgingly did so, placed the pictures, went through a now open door, and walked down a pointlessly long corridor which featured a locked door, a savepoint, and the last piece of pot. I saved, picked up the piece which magically reassembled into a full pot, had to walk all the way back to the Ballroom to place it, and was killed by the Stalker because it could see me through a table (which are the only things to hide behind). I reloaded my game and discovered that all bar the last piece of pot had vanished, so there was no way to create the pot or progress further without doing it all again. Why put the damn checkpoint there if it breaks the game?!

Even the audio is messed up. The writing is utter bilge but the voice acting is worse, clearly spoken by people who have never read English out loud. Half the time what they’re saying doesn’t even match the subtitles. Sound effects are inoffensive enough, but there are only one or two tracks of music and they play on repeat over the entire game so get tiresome very fast - and there’s no way to turn the volume down. 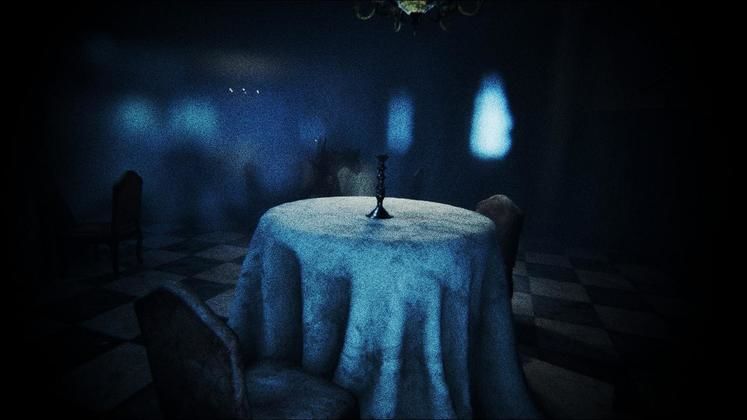 Graphically we reach Haunted House’s one potentially redeeming feature, as the Unreal Engine 4 makes it look good in screenshots if nothing else. Fortunately after two patches they’ve finally fixed the stuttering problem so the game doesn’t run like arse anymore. Sadly characters and monsters are bland, areas contain very little of interest, and the whole house seems designed by someone with very little imagination. Just play Clive Barker’s Undying or the soon-to-be-re-released Resident Evil Remake to see how to design a compelling scary mansion. Oh, and before I move on to the verdict, the “Spell Crafting” menu which pops up when you press ‘C’ (keys can’t be reassigned remember, so screw you if you like that key to be Crouch) has killed me more times than any monster. Quite simply it doesn’t pause the game and can’t be closed without extreme effort, so if you press it by accident with a Stalker around you’re dead. Double great.

Haunted House: Cryptic Graves is an atrocity. It not only fails to do anything right but everything it tries to do is either an utter failure or completely broken. The story and writing is convoluted nonsense, acting is dreadful, design is tedious, mechanics are useless, music is both poor and stuck on repeat, and there is just so much that has been rushed or unfinished that it’ll be a miracle if you get past the first hour. It’s not even particularly scary, barring a couple of early jumps. Dreampainters’ previous game Anna was fairly well received so I’m not sure what went so very wrong here, but I’m guessing it had something to do with Atari only announcing it two months ago - which doesn’t look good for the next Alone in the Dark. To sum up, Haunted House: Cryptic Graves is a game you should steer well clear from. All hail the new E.T…

Realising that now you’ve played the worst gaming has to offer the bugs in Assassin’s Creed Unity suddenly don’t seem a problem anymore. 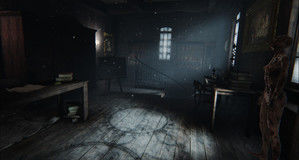 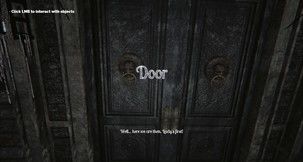