Lovers in a Shattered Land 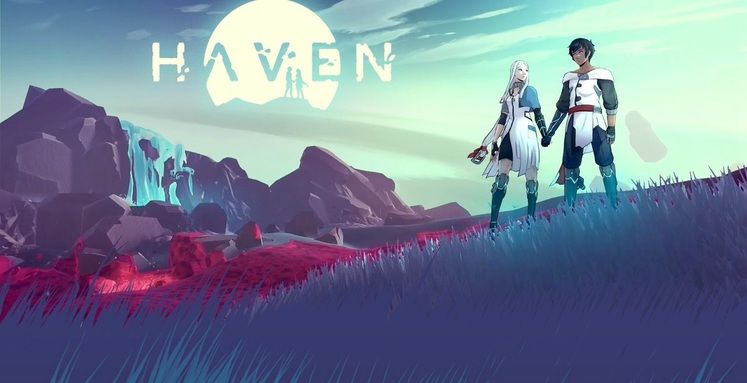 Haven doesn’t give away a whole lot from the start. Protagonists Kay and Yu are a loving couple stuck on a strange planet called Source, but you don’t quite know how or why they ended up there. As you get accustomed to moving around the small islet on which their ship landed, the natural chemistry between the two characters quickly makes its presence felt, persisting until the end. Small moments in which they hug or kiss to regain some health after a tough fight – without requiring a button prompt – always take you by surprise.

Tidbits of conversations that naturally emerge as you explore land both new and old flesh out the character’s personalities, adding to the bigger reveals that happen during longer visual novel-style dialog sequences. It’s a mostly relaxing experience dotted with a fair share of combat encounters, resource collection and discoveries that keep things interesting, its different elements never clashing.

Few movement mechanics feel as liberating as gliding across Haven’s shattered islets. With the press of a button, your characters launch themselves forward, hovering above ground at a steady speed. Whether you’re just picking up ingredients for cooking or following a bright blue Flow thread to an otherwise inaccessible area, there’s a sense of boundless freedom to just moving around, despite the relatively small size of each chunk of explorable land.

Turning is smooth by default but when extra finesse is needed to not fall off a thread, you can drift to slow down or instantly turn in the opposite direction at the press of a button. The boots the protagonists wear have a sort of magnetism that gives enough leeway to avoid falling off a thread when its trajectory surprises you. But even when it happens, you don’t have to backtrack all that much. 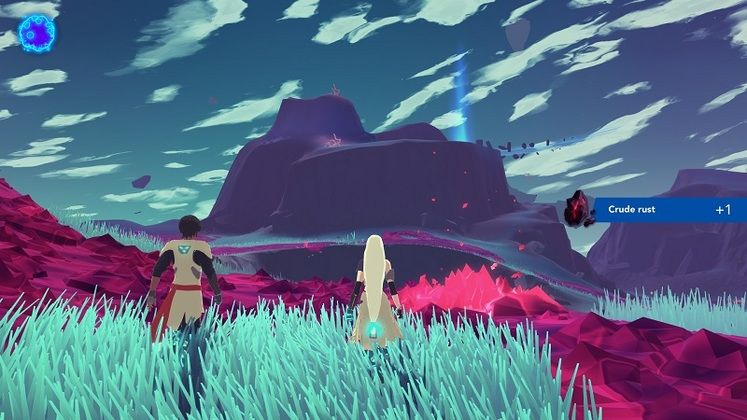 It also helps that Haven’s islets are surprisingly beautiful, which isn’t something you’d normally expect to say about shattered chunks of land covered in strange pinkish-purple Rust. But it’s precisely this contrast between the cyan grass and the invading substance that makes for some of the most striking sights in the game. Rust itself – although a foreign stain that coats the ground and turns the wildlife aggressive – isn’t as off-putting as corruption usually is in video games.

While this tapestry of rock, rust, grass, and decrepit buildings remains static, the time of day is another instrumental piece of Haven’s visual puzzle. Sunset, night and daytime each frame Haven’s landscapes in nuances that establish an unexpectedly strong atmosphere, playing into what’s a terribly enchanting symphony of color. Equally colorful is its soundtrack. Led by futuristic synthesizers, the tracks that accompany Kay and Yu on their journey change based on what the two are doing and their surroundings.

Flow is Haven’s multi-purpose resource and, like most things, its importance is gradually revealed. It starts off as a means of accessing higher places. Your boots store Flow when following threads to their end, and you need a reserve of it to clear the pinkish Rust that’s taken hold of most environments. This action seamlessly integrates into exploration and proves surprisingly compelling to do, even when optional. Naturally-occurring Flow bridges enable travel between Source’s suspended islets. Later on you can convert it to energy and use a short burst to stun opponents and postpone battles, or open doors revealing more about the planet’s former inhabitants, sometimes rewarding small items that make the ship feel a bit more like home.

The different types of plants and fruits you pick up play into Haven’s “cozy survival” element. Kay and Yu combine them into types of food that stave off hunger and cures that restore health. They can use these items either at camps in the world or back at the ship which acts as their home base. It’s not a very demanding survival system but the two do get hungry the longer they stay in the field, increasing the time it takes to charge attacks during combat. Although they might take a short food break without being prompted if you stretch things out too far, you’ll sooner or later want to return to the ship, and there are other reasons for doing so. 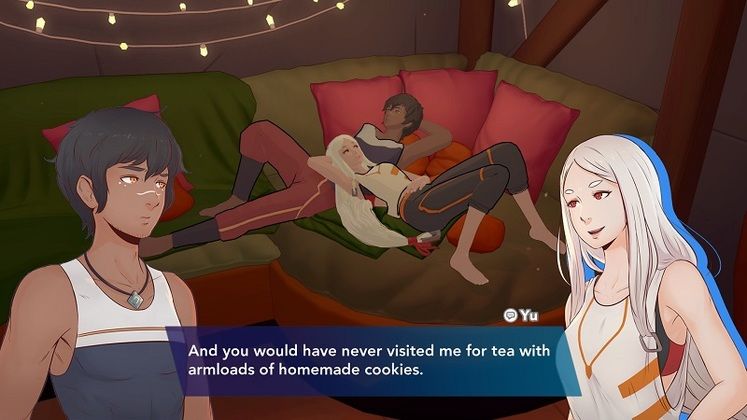 Inside the ship, you no longer trail behind the couple in a third-person perspective, but rather inhabit a disembodied camera that can freely move between the few available rooms. It’s here that you can interact with objects or the two lovers to prompt them to cook more food, eat, or store it for when they next venture out. You can also upgrade your equipment at certain points in the story and craft the aforementioned cures, alongside different pills that enhance your combat abilities.

When the two are tired, they need to sleep. When they have bonded enough, you can prompt them to enjoy a glass of applebrew and have a chat. This is the game’s level-up mechanic that increases their health, fighting coordination and strength. It’s on this very ship that a good chunk of the major dialogs happens, piecing together the couple’s situation. Important events trigger some of these significant conversations but quite a few emerge naturally. Despite the fact that you’re guiding the two for a good chunk of the game, you always feel like you’re an observer looking in on an established relationship that could plausibly exist without your input. 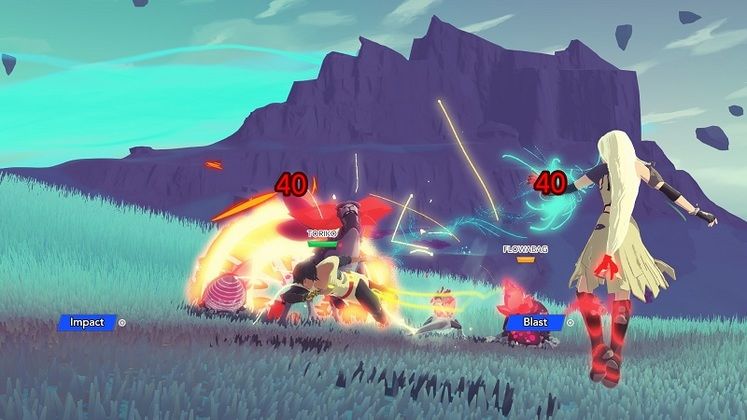 There’s never any forced sequence of exposition and everything that’s not immediately explained is elaborated upon in organic conversations that prove very effective in bringing you into this universe you know little about. Discovering both what Kay and Yu know and what surprises them makes you feel like you’re right there with them. This extends even as far as simple tips that are meant to actually aid you.

Although handcrafted, the islets never really stand out and blend into each other, to a degree. But when you mistakenly circle around or head towards one that you’ve already visited, the characters remind each other of that fact, without it coming across as tutorial advice. The writing as a whole also boasts a fair amount of range. Kay and Yu can be serious, playful, goofy or witty, but they also don’t shy away from sharing romantic or erotic moments. They’re two people who know each other and are also deeply in love. The expressive voice acting pulls its weight, compensating for the lack of detailed facial animations. Occasionally, certain dialog choices can lead to unjustified attitude shifts, but that happens rarely and it’s easy to get past. 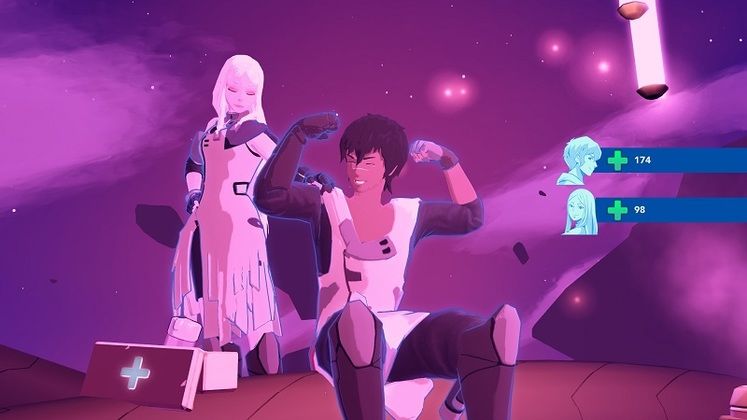 As you bump into cute lizards, round bugs and monstrous vines touched by Rust, you enter combat. The first glimpse of the battle screen can lead you to think that you’re dealing with the usual turn-based JRPG fare. That couldn’t be further from the truth.

Haven’s combat happens in real-time. You have access to a shield used to protect against attacks, a ranged and melee attack, alongside the finishing Pacify move, useful only when your opponent’s health is depleted. Each attack must be charged and is cast when its button is released, provided you’re not interrupted. It’s tricky, at first, to control both characters at the same time. But after a few battles, you’ll begin to internalize rhythms based on the opponents you’re facing. This likely isn’t an issue in co-op. Nevertheless, pulling off smooth sequences of attacks on your own is akin to playing an instrument.

All creatures are vulnerable to a specific type of attack and you automatically target the ones more susceptible to the attack you’re charging. Battles start off straightforward, but you gradually encounter foes that are only vulnerable after they attack or some that change their vulnerabilities depending on their stances. Punching a giant ant’s strong shield doesn’t do much, but charging a Duo Blast attack – which sees Kai and Yu strike in unison – and releasing it at the right time punches through quite well. It’s all a matter of learning patterns and, especially when you’re facing multiple opponents, things get intense but rarely overwhelming.

Popping an Omni-blast pill to attack everything on the other side works wonders against smaller foes, but the bigger ones, you’ll have to juggle carefully. When your HP is depleted, you can help each other up and continue the fight, your window to do so decreasing with each knockdown. Failing in combat sends you back to your ship or a nearby camp, from where you can patch yourself up and try again.

While that might sound daunting, Haven isn’t a difficult game. We only died a couple of times and always to the few bigger opponents whose patterns were new to us. This was never an impediment but made overcoming them feel like accomplishments. If, however, you’re having trouble with any of it – or simply don’t care for combat – you can decrease its difficulty from the menu, targeting the time and damage of enemy attacks and similar options. You can also press Q to enable rush mode and have fights automatically play out at higher speeds. Just know that Kai and Yu might not always make the best decisions.

Haven exudes an amount of confidence that’s not often seen. Every piece falls into its place and there is never a moment to suggest that developer The Game Bakers had any doubts about the direction in which it wanted to take the game. Its satisfying exploration of interconnected levels, light survival, story-driven visual novel elements, and rhythmic combat all serve the greater experience. It boasts some of the most organic writing we’ve seen in a while and strong protagonists with excellent chemistry. Kay and Yu embody weakness and strength, childlike wonder and maturity, and kick ass together when the need arises. It’s hard to dislike them. Regardless if you’re in it just for its story or want to see everything it has to offer, Haven always finds a way to reward you and never wastes your time.

Kay and Yu kissing after a tougher fight without requiring a button prompt and regaining some health in the process. 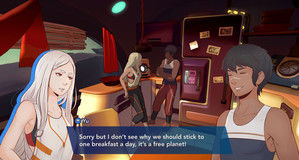