From space dust to sand dunes

You see, Homeworld: Deserts Of Kharak might be set on the sandy planet named in the original game, but it still plays in a very similar fashion. You might be more limited in your movement than the vast openness of space, but the sensation of careful counter-strategy is still as strong as it ever was. 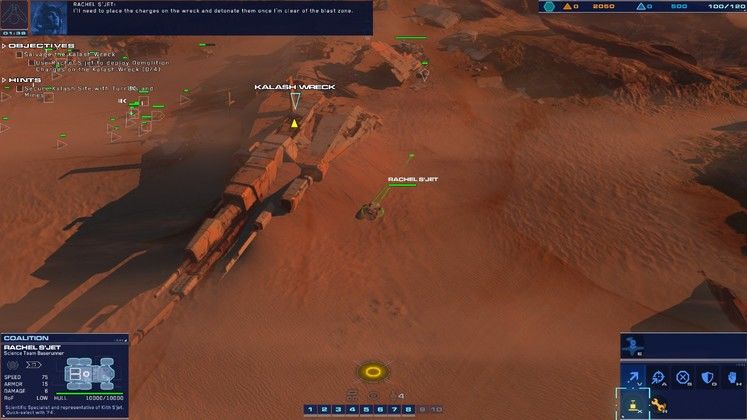 In fact, we’d go so far as to say it’s better. Since you’ll be battling it out among the sand dunes of Kharak, the height advantage plays a much more significant role than ever before. It means traps can be more ably set, using the terrain to an advantage that wasn’t really possible in the original Homeworld - outside of Corvette mines, anyway.

It adds to rich strategy rather than removes from it, making it important to survey not only your potential threats but the location that they might possibly attack from, and positioning your own units to overcome that.

As with the previous games, Homeworld: Deserts Of Kharak relies very heavily on counter combat, which is to say there’s a heavy emphasis on rock-paper-scissors damage dealing. Units are slower to move than many RTS games, and while that gives each unit a sense of weight and personality it also means battles are much more manageable.

It won’t be enough to simply throw a huge army at a problem, since without the right strategy even your most powerful units can be torn apart. This isn’t the StarCraft breed of strategy - high-speed rush tactics and even quicker counter reactions - but instead the sort of thoughtful RTS that original developer Relic Entertainment became known for.

The inclusion of a mobile base has been handled especially well, too, with an upgradable power system that lets you shunt power to different areas of the machine, from area effect repairs on nearby units, to powerful turrets or increased armour. It means, if you so choose, your base can be can be integrated into your strategy.

There are a number of neat features, too, a particular favourite being the way new units are dynamically positioned based on things like whether similar units are nearby or if your carrier is moving. It’s a subtle thing, but it adds to the sense of being in control of a real military operation - and more than anything makes it easier for you to manage. 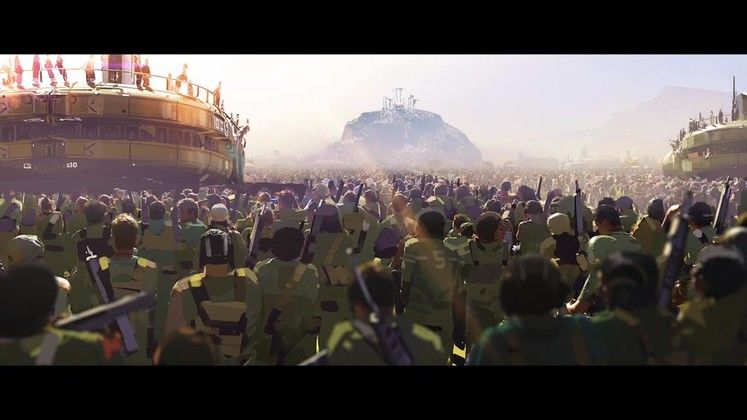 The initial cut-scenes to each stage are played out through beautiful animated art, before a C&C style map overlay explains the mission ahead

There are a couple of issues with controls, though. Since terrain is such an important facet, it can be a bit finickity arranging for a fleet of units to take position on the peak of a dune. Since the game is able to detect height, it’s a shame clicking a dune peak won’t automatically align units with its curves. It’s not easy to rotate a formation, either, making it a pain when setting up the perfect assault.

Then there’s the fact that if you select more than one type of unit, not every ability will be available in the hotkey or menu. It’s frustrating since they can be integral to a strategy - such as laying down a line of smoke grenades to evade long range fire. It’s a minor issue, especially since the slower paced combat means you at least have time to switch between grouped units, but an issue all the same.

Yet with that there are very few other concerns to be found. This is a solid RTS outing that manages the perfect balance between resource control, immersive counter combat and terrain positioning. That’s not the only place it impresses, however. Paul Ruskay, the composer on the original Homeworld, returns to score this game, and the Arabian-styled tracks make for an exceptional audio experience. The sound in general, in fact, is very well done, with little touches - like inconsequential radio chatter - to create the feeling that a huge, military operation is under way. 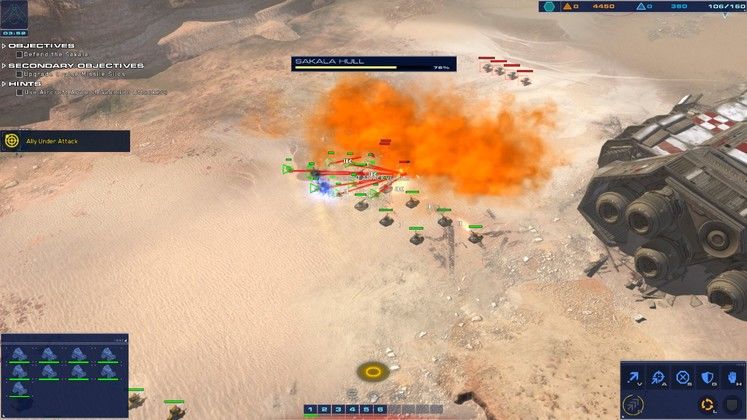 The idea of a persistence force returns, with units and resources carrying over from each mission. It means you’re more keen to keep units alive

Visually it impresses too and while the models aren’t the most intricate (this is an RTS, after all) the visual design of the game is a treat. The desert setting doesn’t ever feel too monotonous, either, since smart use of rocky terrain and the different times of day gives you very different environments to tackle. But it’s the story that is most impressive. Considering this is both a prequel and a game that was retrofitted into the Homeworld universe from an existing game, the story is surprisingly robust.

For fans of the series it ties in extremely well, but regardless of how much you know it’s an interesting tale all the same. It’s simply told, but effective, and you’ll feel a compelling sense of progression that absorbs you into its world.

As a RTS Homeworld: Deserts Of Kharak doesn’t actually have much new, but it’s still one of the better releases for the genre in a long time. In many ways it feels like a modern Westwood classic, but most importantly it evokes the same feelings of complex strategy that you might have had when playing the original Homeworld games.

Honing a strategy for a difficult portion of the game until the intricate strategic elements - counter combat, height advantages and ability use - all came together to finally succeed. 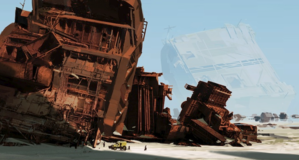