I Am Alive Review

Newly ported to PC, I Am Alive is Ubisoft’s punt into the realm of the survival horror

Newly ported to PC, I Am Alive is Ubisoft’s punt into the realm of the survival horror. Amidst zombies, parasitic aliens, and a ghoul or two, this end of the world chiller doesn’t dabble in the supernatural but instead with the terrors of a crumbling society: does it work? Answer: Magnificently.

In a post-apocalyptic world, all is bleak and grey. Corpses litter the streets like fallen leaves, rusting cars idle by the pavement waiting for forgotten owners, and I viciously, and repeatedly, club a man about the face with a blunt machete.


It's not like I wanted to do it; this fuzzy villain made moves towards the little girl that I strap to my back; and if you can't bludgeon a paedophile post-apocalypse, I ask when can you? Bloody and battered I leave this fiend on the floor, a reminder to everyone that while the world may be dusty and broken, that "shit" still 'aint right.

I Am Alive is a survival horror set against the fallout of a destroyed city. An occurrence known only as the "event" has ripped apart civilization, reducing buildings to rubble, and life to that of a particularly irritating grazed-knee: painful, uncomfortable, and often unsightly.

Survivors cling desperately to life, whether that's by holding up in deserted shopping malls, or forming marauding gangs searching for cans of fruit cocktail. Think of The Road, without the lingering thoughts of "What does foetus taste like?" and you are somewhere in the vicinity of the right atmosphere.

Taking the part of a ruggedly handsome beard-owner, you have returned to your ruined hometown of Haventon in search of your wife and daughter (just once I want to play the part of a man searching for his much-loved cat).By climbing, scrapping, and waving an empty pistol in the mush of the odd scavenger, you hustle through the remnants of civilization, finally returning to your apartment.

And then it all gets interesting. I Am Alive is less of a game, and more of an experience. It's a compellingly miserable tale of human struggle and survival against the odds. Your character (while handsomely bearded) is battered and bruised, caked in filth, and always, always out of breath. While it bares similar hallmarks to Ubisoft stable mates, this isn't Prince of Persia, this is actually a warning shot for every tubby joystick-twiddler out there: come the "event" we're the first on the BBQ.

While a survival horror game at heart, I Am Alive isn't Resident Evil; in fact it plays closer to something like Uncharted. Objectives will involve hurtling from one crumbling bit of debris to the next, swinging from ropes, skittering down window panes, and trying not to break limbs in the process.


To make this element more interesting is the idea that your character is indeed mortal. Rather than an infinite gauge of endurance, our beardy man is limited. An overarching bar of stamina is always present, depleting when running, climbing, and especially when jumping. Figuring this bit out is central to the game. Let it drop too low and without anywhere to rest and you'll soon be hurtling towards the ground, ready to spread around brain matter like confetti.

While it sounds like a rather simple pretext, I Am Alive is surprisingly enjoyable. Rather than throwing mechanics out along with the kitchen sink, the developers have made an event out of everything you do. Climbing isn't a matter of jabbing the direction button and allowing the AI to do the work, it's about finding the way, judging capabilities, and you know, surviving.

Adding to this is a brilliantly executed combat system which contrasts starkly with Ubisoft's other balls-to-wall games. Gone are the effortlessly accomplished combos of Assassins Creed, and the frenetic running-and-gunning of Tom Clancy software: bullets are limited, and our survivor isn't a 10th Dan martial artist. It's about getting up close and personal with a machete, and waving around your gun like an ineffectual water pistol. If Michael Corleone can pretend, so can we.

All conflict within I Am Alive normally takes place as a set-piece, with a number of enemies converging around you triggering dialogue and the brandishing of something shiny. It has a grim sense of realism, as time neither slows down nor speeds up. Knowing you aren't toting an AK-47, and with only one or two bullets at any one time, you have to judge your moves. Waving around a pistol will make others draw similar hand-cannons, conversely not acting soon enough will see you murdered within seconds.

And the other considerations to take into account are that some enemies aren't enemies at all. Sometimes stumbling upon a survivor will produce that most human of reactions: fear. Instead of mindlessly stabbing everyone in your path, you have to consider if you have trespassed upon the lands of an innocent, simply driven mad by paranoia and the crumbling society around them: it gets you thinking is what I'm saying.

So when you finally weigh up the pros and cons, and commit to slashing at an enemy, therein comes more problems. Taking out one combatant at close range will alert others that you are packing. With so few bullets, you will have seconds to take out anyone with a ranged weapon - if you feel it's worth it - and then it's a matter of crowd control, pointing your weapon at everything that moves, backing them into fires, cliff edges, and sometimes just letting them be. You don't just maim and remorselessly squeeze triggers in I Am Alive, and that's why it is such a compelling experience.


Over the six hours or so you will spend with Ubisoft's survival horror, you will learn a few things about yourself. Taken purely as a game, I Am Alive can be a clunky, no-thrills PC port, and at times ugly with its dated visuals, but as an experience and a piece of art that you immerse yourself within it is enthralling. It may not be as well executed as other titles out there, and will not stun you into awed-silence as set-pieces involving an Italian cutthroat might, but it will transport you to a place you have never been before.

I AM ALIVE VERDICT

I Am Alive is brutal; gripping; captivating; depressing; miserable; and almost always utterly brilliant. An unforgettable game that reminds you why we all love this medium. This is an incredible experience that rewards those people that go with it, ignore the negatives, and immerse themselves within this miserable world. And for a budget price, why not? 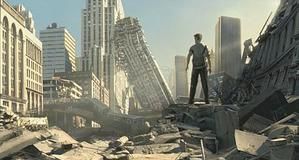