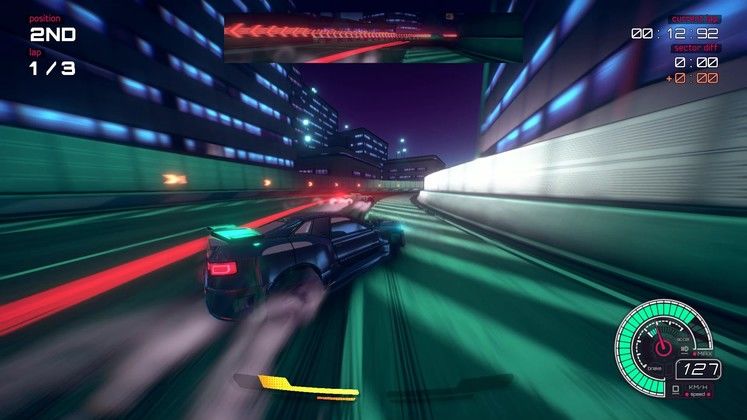 My time with GameWatcher has taught me a valuable lesson: I do not care about car simulators. I get why people do, there’s a fun fantasy in those games. But it’s not for me, realistic driving sims remind me why I hate driving in real life. It’s why seeing the more arcade-y racers pique my interest. My opinions withstanding, how does Inertial Drift work as a racer? Selling itself on an unique control scheme and retrofuturistic style, it seems like the perfect game for anyone obsessed with Initial D. Let’s quit the preamble and see what this is about. Quick warning though: finishing this review will cause the word drift to lose all meaning.

Inertial Drifts involves four friends in a futuristic 90s (Ibba, Ada, Viv, and Edward) getting ready for the Summer Grand Prix: a racing tournament happening all over the county. Each of them have a different view on the Grand Prix and racing, and you get to learn more about the group as you drive all over. There are four different story modes depending on who you choose, with each one introducing the player to different vehicles and racers. Each character also acts as a separate difficulty level, introducing you to additional complexities with the racing. If anything, the story mode acts as a separate tutorial and that’s not an insult. 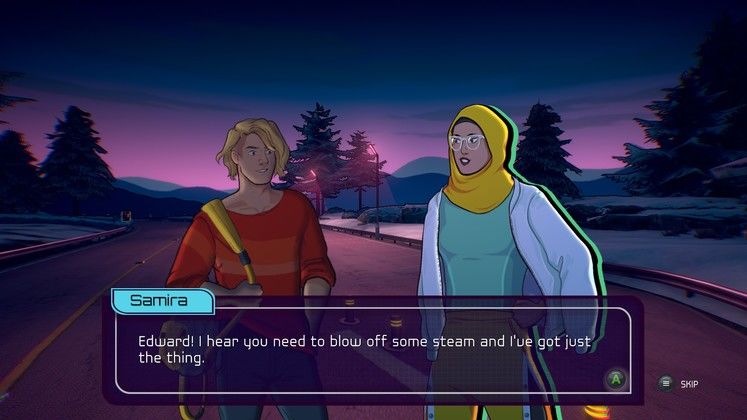 It follows a simple formula: go to a level, repeat it in different game modes whilst learning how other people race, go to the next one. You’d think this would get boring, but it works really well. Since you’re getting accustomed to the levels, the repetition gives you a clear sense of progression. Not only are you understanding the track layout, but you’re also understanding the controls. I’m not one to usually care about shaving seconds off of a time, but I do admit to feeling a bit of pride when I cut 5 seconds off my race time here.

The thing that surprised me about Inertial Drift is how upbeat everything is. Not just with its visually appealing style, but also thematically. It’s a racing game all about positive vibes and everyone doing their best. There might be some drama here and there, but everyone is here to race because it’s what they want to do. It makes you want to get better at the game. Not just because it’s fun as hell, but also because a lot of characters are rooting for you. It’s the epitome of friendly competition, and that’s a trope more racers need. It’s clear Inertial Drift eggs a lot from Initial D (hell, even the name), but it’s done as a homage instead of a full-on rip off. One thing it noticeably doesn’t nab from the anime is a eurobeat soundtrack. Instead, the music is decidedly more chill than its inspiration with more relaxed techno. It’s not a bad thing, though I would personally prefer the stylings of Odyssey or Dave Rodgers.

I Came Up from the Bottom and into the Top

As a racer, it’s pretty to-the-point; get to the finish line before your opponent or beat the time trial. But what helps make Inertial Drift stand out is it’s incredibly intuitive controls. You’ll need to play this with a controller, because it follows a basic but engaging concept: the left thumbstick is to drive while the right thumbstick is for drifting. As a premise and as a gameplay loop, it’s ingenious. There’s a real satisfaction to a drift’s skid here. Not only that, but it’s also a very clear indicator of skill. Being able to properly skid without smashing the guard rails or sliding into snow is visceral, and it makes the time trial-based gameplay all the more engaging.

It might not seem like something that would come with a huge strategy thanks to straightforward controls, but you’d be wrong. Each car not only drives differently, but also drifts differently too. Sports cars might be able to drift quicker and sacrifice top speed, but muscle cars drift slower and force you to start drifting with your hand off the throttle. Even something as straightforward as braking can vary from car to car, where it can either stop your drift outright or drift even more. Something as simple as changing a car can change how you approach a track, and that makes the game very replayable. 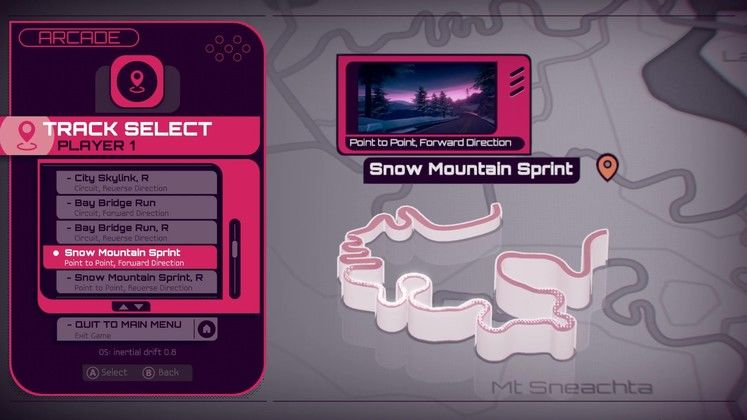 Apart from the racing modes you’d expect, Inertial Drift has a mode called Style which was a definite highlight. Instead of a quick race to the finish, you instead drive to the end as stylishly as possible and rack up a score through speeding, tight drifts, and dangerous driving. It’s a fun way to experience the game, and it switches up the gameplay nicely. But much like its arcade inspirations, Inertial Drift is a bit short. Finishing someone’s story mode can take 2 hours at most, maybe longer if you want to 100% it. This isn’t a game that’s “one and done”, this is a game where you gotta try everyone’s story. This is made for people obsessed with the perfect run. Thankfully, there are unlockable cars and even a tougher difficulty after beating story mode to make replaying it all the more worthwhile. Add that with all the leaderboards you can fight for and local multiplayer modes, Inertial Drift is a compact package that doesn’t waste your time and goes as long as you want it to.

Where to buy Inertial Drift

Inertial Drift is an espresso shot full of arcade-y goodness. Its approach to drifting isn’t just intuitive, but it encapsulates that Initial D fantasy wonderfully. It might be shorter than other games coming out, but that time spent is enthralling and well worth it. If you love arcade racing, you can’t go wrong with Inertial Drift’s “easy to pick up and tricky to master” style. 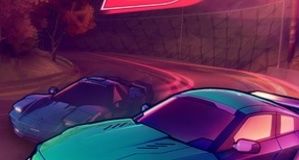