Poor old aliens. All they want to do is expand throughout the universe, devouring all organic life. Then some whooping redneck jetpacks down from on high, wielding an assortment of high-tech weaponry, and blows their mandibles off. It's a hard life.

Infested Planet is a top-down real time strategy game with more than a hint of the tower defence genre about it, in which you take the role of a squad of mercenaries battling swarms of alien bugs. You start off with five marines, all armed with a reasonably effective, if unspectacular, assault rifles and some rocket launcher rounds. The game's single currency, BP, can be traded for further squad members, upgrades and building options, but to gain it you'll have to take down alien nests scattered about the level. This typically involves selecting your squaddies and pointing them at the nearest hive, which constantly spew out enemies, then waiting for them to blow it up with a gratifying splat. There's various capture points like this spread across each map for you to take and control, and defend against alien counter-attacks.


Of course, the game introduces a little more complexity than that. Like you, the aliens can build turrets and other buildings to defend their homes, which are also toughened against small arms fire. To wipe them out quickly you have to get close enough to fire off your missiles, but doing so leads you into the rapidly spawning swarm of critters. You need to keep up a constant stream of fire, whittling away at the horde until you get enough room to really damage their fortifications. And you need keep an eye on the ammo counter. Missiles are your friend, but you'll quickly run out and have to wait for your regenerating stocks to replenish. Bad timing here can get you filleted in short order.

While early story missions can be defeated with relative ease, most being little more than practice matches to get you used to the units and basic upgrades, the difficulty ramps up as you go on. By the end of the game the aliens respond with frightening speed to every lost hive, spewing out scores and scores of drones and bigger, elite enemies to test your defences. Infested Planet has a nice 'mutation' system whereby the aliens gain various evolutions with each defeat; you might see their structures form a spiked exterior wall that must be destroyed in order to damage the building, or the alien horde might start producing suicide units that spawn multiple mini-hives when destroyed. There's several of these different modifiers, all of which make things increasingly nasty for your poor lads and ladies on the front line.


Some of the later missions became a frantic rush between objectives, with my troops fighting fires all over the map, constantly having to overcome yet more alien evolutions with each fresh victory. These moments are when the game shines, when you're desperately waiting for a timer to run down as your guys get taken down one at a time. It can be tough, but you always feel like you've got the tools to deal with the situation. Splitting your team into smaller groups and protecting key areas with turret upgrades and well-timed helicopter or mortar strikes is the only way to survive these harsher tests.

Upgrades include flamethrower, minigun and sniper troops, each of which have their own strengths and drawbacks. Flamethrowers are excellent against buildings, but have to get right up close before they can shoot. Protecting them from being overrun is key. Miniguns are devastatingly powerful, but pretty slow. More useful for holding points on the map than quick assaults or rapid responses. Snipers are good against enemy swarms, but can't damage the main hives, so you need to keep them focused on clearing out enemies to make space for your big guns. There's also a few different types of turret, some medical upgrades and an absolutely essential helipad which allows you to bombard enemy bases from afar. It's not spectacularly deep strategy, but there's enough different combinations and troop types to master to keep you on your toes.


Pacing is pretty good too, the game makes sure that you're not swamped with too much gear in the early game and ensures a steady stream of new options as you make your way through the campaign. There's three branching mission paths, two of which are comprised of optional side missions that can earn you extra cash to spend on pre-mission buffs, such as an extra soldier or a medical unit that heals your soldiers in the field. The third branch is the story mode, though don't expect much of a narrative. Floating heads and text boxes will occasionally pop up to mutter some guff about what the aliens are up to, but really, who cares? That's not the point.

The point is fun, and that’s something Infested Planet has in spades. Blasting aliens is inherently enjoyable thanks to responsive controls and some satisfying sound and visual effects. Rifles chatter away, shotguns boom and purple blood splatters all over the place, while air-strikes and helicopter attacks send all sorts of biological matter flying. The campaign might not occupy you for long, but it’s an enjoyable ride while it lasts, with some tough moments later on that really had me under pressure, but never felt unfair. Then there’s a simple skirmish mode if you fancy a more straightforward bout of Starship Trooper -ing, with the welcome addition of randomly generated missions. Blasting away at alien hordes does eventual get a little repetitive as you fall back into the same routine of building turrets to secure captured zones and slowly pushing forward into enemy territory, and enemy unit design is a little uninspired (they basically all look like blue and purple grubs), but all in all Infested Planet takes a simple concept and makes it into a satisfying and addictive experience. Well worth your time.

Desperately holding a capture point with two shotgun troops and a flamethrower as the frankly ridiculously huge enemy force creeps ever closer. 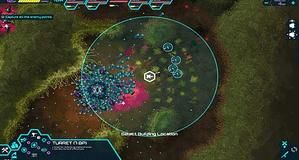