If you're a fan of the film, don't buy this game. If you like movie tie-ins in general, you'll end up very disappointed by this one

Having literally just seen the film I was actually looking forward to playing this game. I say actually because movie tie-ins don't have the best of reputation for reliving the atmosphere and thrill of the films that they desperately try to represent. After just a few hours play of Iron Man however, I wondered if Sega of Europe had desperately tried at all.

The game starts out 'ok' and simply goes downhill from there. The first level sees you running around using your flamethrower to down on-rushing enemies as you try to escape the cave in which the hero, Tony Stark has been held captive. It is here that all the game's faults begin to seep through.


The bad guys don't seem to have any sense of direction whatsoever, they run into walls, run right into your path, it's almost as though they want to be killed. No use of cover, in fact, although they're artificial there's no intelligence to speak of at all.

The flamethrower itself looks extremely poor with the fire looking like a lazily rendered Xbox port rather than displaying next-gen detail. The camera is extremely jerky too. It's all run and gun stuff until you meet the boss, who's basically a big tank that takes just a few more hits to bring down. Still, the level itself was short enough to be mildly entertaining but believe me, it goes downhill from there.

The next level is Ironman learning how to fly. You and your AI side-kick, Jarvis take to the skies and try out Tony's new technology in his new and improved Ironman suit. Then disaster strikes as you HQ comes under attack and it's up to you to take out all the tanks and helicopters until you meet a top-spec gunship. Yawn.

The flying is as jerky as the running. You never really fell in control. There's no fluidity are grace to your movement and hovering for too long in one place just gets you bombarded with enemy fire until your heart can take no more. Luckily for you, you can reboot twice, if your heart fails again however then it's game over.


In fact, almost every level is just go here, blow that up, fly there, blow that up look out for the big boss and then blow that up. Repetitive just doesn't quite fit the bill in this instance. Everything's over so quickly without any real panache or grace to the proceedings. You simply hammer the buttons, watch for pithy explosions and move on.

Even the voice work of Robert Downy Jr. can't save this game. In the film, his witty quips and on-liners worked and in fact took the film to another level. He was supported by the lovely Gwyneth Paltrow and Jeff "The Dude" Bridges. However, his in-game comments only irritate and make you dislike your protagonist even more. The characters look nothing like their movie counterparts either, they're just roughly similar. In fact, I couldn't remember one incident the felt like the movie at all.

Still, if all this still doesn't put you off you'll be glad to know that there are various objectives for each mission like a time-attack and kill a certain number of enemies. If you manage to fulfill these requirements then you're awarded points which lead to suit upgrades. Being honest though, I really didn't notice any difference at all after I upgraded my suit but there you go. However, they're there and I suppose it adds some life to the game.

If you end up actually dying - which is rather difficult but I seemed to manage it anyway, probably because I was thinking how fun it would be to watch paint dry - then you're booted right back to the beginning of the damned level. Now, as you progress the list of objectives start to pile up and the levels, although all very small in size, begin to take longer and longer. I don't see why Sega of Europe has decided to not punctuate the completion of each mini-mission with a checkpoint, but well they didn't. So if you get to the boss or a particularly tricky bit of the game and end up stone dead, then it's right back to the start again. I really wasn't happy about that as doing the same chore twice wasn't my idea of fun.


So is there much more to say? I don' think so. If you're a fan of the film, don't buy this game. If you like movie tie-ins in general, you'll end up very disappointed by this one. If you want a mindless run and gun style experience then go by Quake 4 for next to nothing.

Seriously at no time did this game display what the 360 was capable of. It felt like a lazy PS2 port (which it probably was). There are so many other games you could be spending your forty quid on - like GTA IV for example, or even saving up for a movie franchise game that actually does bring the feel and atmosphere of the film into the gameplay: The Bourne Conspiracy. Look out for our review of that and don’t waste your time with this.

There wasn’t one - seriously 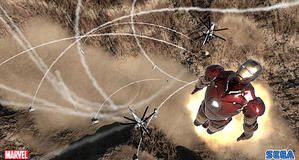