You are the Lyw in JYDGE! 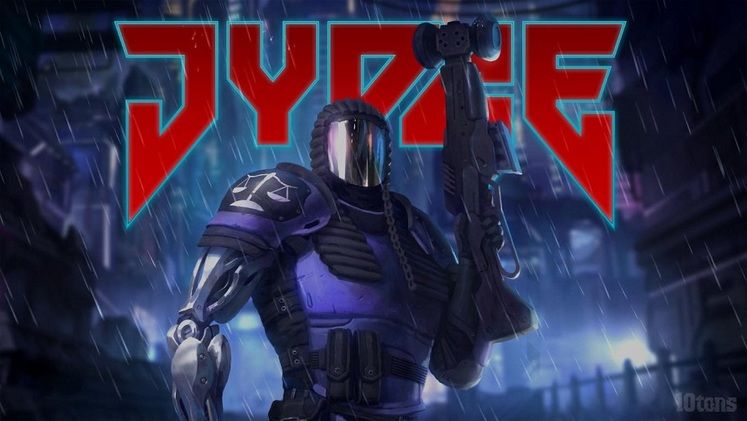 In 1977, Judge Dredd first came to comics in England, dealing out ruthless justice on futuristic streets as one of many police officers made judge, jury, and executioner. Film fans might recognize the title from the Sylvester Stallone led action film adaptation in 1995. Jump forward a little over a decade to the release of the first Hotline Miami in 2012: a brutal top down action slayer in which players infiltrate compounds, brutally murder enemies and try to escape without being slaughtered themselves. There were good times had with both of these entertainment spectacles. Why does that matter? Well, it’s because they somehow found their way to a sweet marriage in JYDGE with some key help from the folks at 10tons. Despite being seemingly inspired by these very cool separate things, JYDGE melds them quite beautifully to give players a bullet fest that’s heavy on brutality, challenge, and easy-to-pick-up enjoyment.

JYDGE’s premise is a simple one. In a fictional city of Edenbyrg somewhere in the future, crime has gotten out of hand. Gangs terrorize the streets and normal police are powerless to do anything. That’s when the JYDGE program is initiated, bringing in augmented and super-powered cyborg soldiers of the street. You play one such jydge (judge. get used to liberal use of y’s in other vowel spots here) on a campaign to brutally enforce the law on punks throughout various missions in Edenbyrg. The narrative is short and sweet, but it’s all you need to get going when the music gets pulsing and you’re dropped into your first stage and assignment. 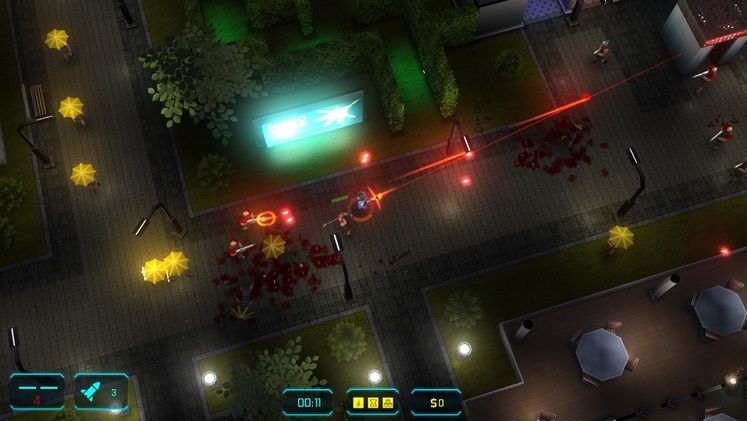 The gameplay in this game is simple, yet every part of it escalates routinely throughout your progression in the game. As you pass missions, you collect credits as well as medals for overcoming various mission sub-objectives. There are three sub-objectives to a mission and collecting medals unlocks further missions as well as various body augments for your jydge and weapon upgrades for their gun, appropriately named the Gavel. These augments and extra slots to equip them are all purchased with the credits you collect from successful missions.

In terms of interface, the game is an isometric perspective twin-stick shooter with an unlimited primary fire, limited secondary heavy weapon fire, and a melee function. It’s really all you needed to get started on JYDGE’s futuristic levels featuring homes, warehouses, nightclubs, hideouts and other creative designs to keep your jydge working overtime. Meanwhile, each mission submits you to a playlist of rock, electronica, and other styles to get your heart going as you carve your way through gang members and buildings to save the citizenry, or occasionally blow them up on accident. 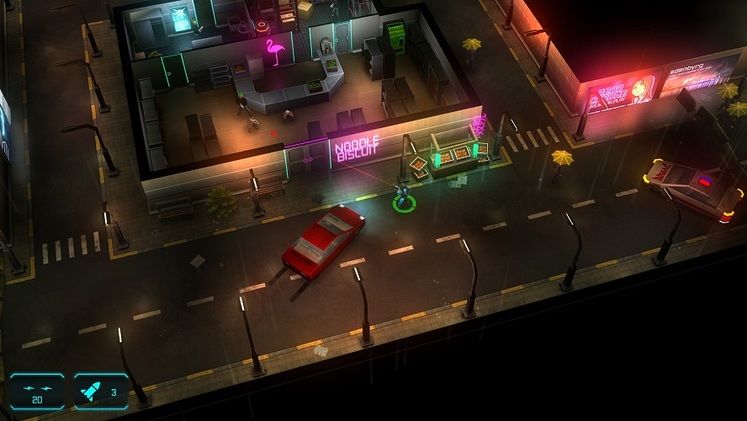 You start out with a simple machine gun and an easy “kill all enemies” mission. That said, it isn’t long before you unlock augments that give you more armor and health, allow you to move faster, and become invisible when still. There are also special Gavel firing modes like shotguns, ionic cannons, lasers, rockets, and augments to give your gun a special edge in battle depending on what you need.

It’s good to have some options because you’ll most certainly need the variety of tools JYDGE offers to get certain jobs done. Some mission medals require you to go unseen through a whole mission, take no damage, or get done and get out in limited time. For every tool JYDGE gives you, there’s an equal challenge that will require you to mix and match weapons and augments until you find the set that will get the job done. Missions can get downright brutal sometimes, but the easily customizable loadouts really make even the hardest tasks worth weathering. It’s truly a generous and bountiful way to keep things interesting and there are even some augments to make things harder and higher mission difficulties with additional medals should you want to challenge law enforcement skills further. 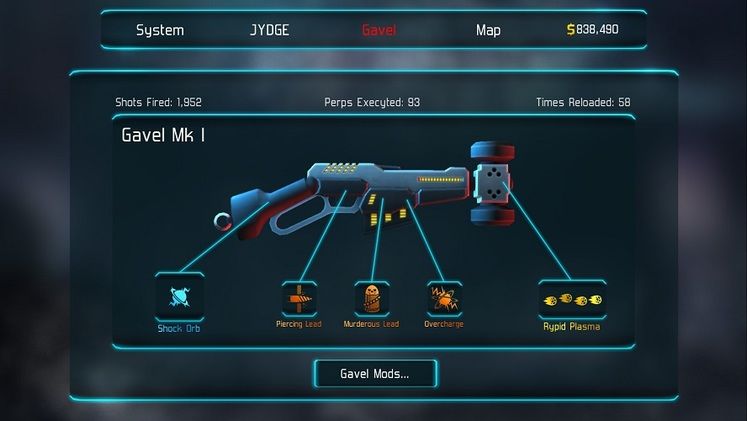 For all its bells, whistles and y’s, JYDGE doesn’t quite have all the bolts tightened. With so many mechanics in play, sometimes they work less than stellar. Stealth and visibility seems to be a bit spotty at times. Enemies might spot you as you fire a kill shot into them or robotic turrets might spin, supposedly stunned but track you anyways. Killing them after being spotted isn’t a problem, but when one medal in a mission relies on going unseen, it can get more frustrating than it probably should be to accomplish the task, even with all the seemingly right gear for it. Moreover, while the music playlist is pretty good, it’s also completely randomized. There are a lot of songs and many of them are worth a listen, but we couldn’t help but think a menu that would allow us to turn off some songs or play others more often would be a little nice for such a freeform audio atmosphere. 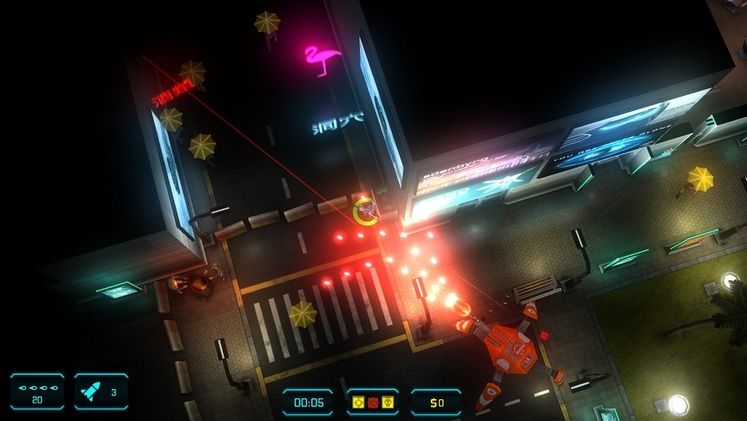 As you can see above, JYDGE is a game that asks very little to get going, and once it’s in gear, it’s as smooth as silk. It’s not the prettiest game out there, but it conveys the message in a maelstrom of bullets, blood, and body parts. Moreover, it supplies a rather nice array of neon, club scenes, housing, industrial zones, and more. For an isometric game that demands so little from any system, JYDGE actually shows off quite a bit of creativity in its designs with relatively little loading times and rarely ever a hitch or glitch to speak of once the action starts.

From top to bottom, JYDGE is a heck of a run-and-gunner. It takes a minimalistic approach to story to give players the simple charm of the futuristic law enforcer that reminds of good ‘80s and ‘90s movies of the sort. Then it melds that environment with a slick combat system that keeps on giving and taking until your jydge is a cavalcade of murderous tools with which to deal out deadly justice, and for which every player will find their own preference. Moreover, levels are relatively bite sized experiences, so it’s an easy game to pick up, play for a bit, and then back out as you see fit. JYDGE is deceptively simple, but its brutal brand of law enforcement has a surprising amount of depth to offer.

Coming up with that perfect set of jydge and gavel augments for a good mission and carrying it out to some good music is a treat every time. 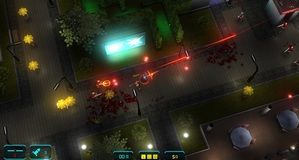 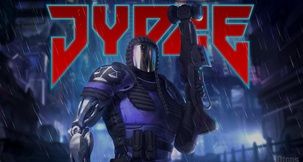